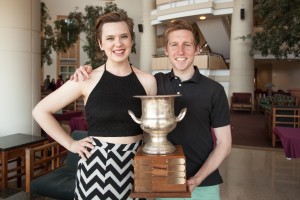 At the United States Universities National Debate Championships (USUDC) held at Purdue University on April 13, the team of Taylor Blackburn ’15 and Jack Stewart ’14 claimed the BQDC’s first national title in the storied history of debate at Bates. Taylor and Jack outperformed debaters from some of the most competitive debate programs in the United States. At an event featuring over 300 individual speakers, Taylor and Jack defeated debaters from Cornell, Yale, and Loyola Marymount in the final round.

In addition to Taylor and Jack’s victory in the final round, all other Bates teams in attendance cleared to elimination rounds as well. Stephanie Wesson ’14 & Matt Summers ’15 advanced to semifinals, while quarterfinalists included the teams of Emily Schwalbe ’14 & Ben Claeson ’15 and Shannon Griffin ’16 & Sasha Grodsky ’16. This outstanding achievement for the debate program at Bates marks the conclusion of perhaps the most competitively successful season in the council’s history. President Jack Stewart outlines the significance of the BQDC’s multiple landmark achievements during the season in a letter to the team:

Even within the context of the BQDC’s long track record of competitive success domestically and internationally, on both fronts, the 2013-2014 season stands out. We’ve doubled our historical total of World’s breaking teams (from two to four), won the novice title at the Brandeis IV, placed two novices in top ten APDA’s novice-of-the-year, advanced four teams to quarterfinals or farther at the U.S. Universities Debate Championship (USUDC), and landed a team in the top five in APDA’s team-of-the-year rankings.

Taylor and Jack’s victory at the USUDC marks the conclusion of an exciting and successful season for the BQDC, but Jack notes that the team’s accomplishments this year signal great promise for the program in upcoming seasons:

As historic as this year has been for Bates debate, the team is poised for even more success in years to come.

For the full story about the USUDC victory published in the Bates newsfeed, visit this link.