The Structure and Function of Plant Vascular Networks

A major focus of research in my lab is on the structure and function of plant vascular systems. Forest productivity is linked to the growth and maintenance of plant vascular systems that transport water from the soil to the leaves. Water is transported to the top of the canopy through a network of thousands of interconnected conduits smaller than the diameter of a human hair, collectively known as xylem. As plants are exposed to stress (e.g. pathogens, freezing or drought), this transport system can become dysfunctional as a result of the formation of emboli, leading to reduced forest productivity, and ultimately plant death. 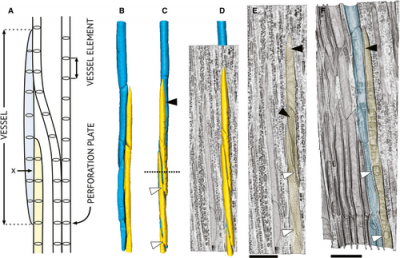 Structure and function of whole-tree 3D xylem networks in response to past, present, and future drought.

Xylem network connectivity is one of the least understood areas of plant anatomy, primarily due to a lack of suitable visualization tools to study the complex, three-dimensional (3D) organization of the microscopic tissues that make up xylem. Plasticity in 3D xylem network anatomy is understood even less, yet it could have significant impacts on the movement of water, nutrients, pathogens, or drought and freeze-thaw induced embolisms. The overarching goal of this NSF-funded project (NSF-IOS 1557917) is to characterize the relationship between the three-dimensional (3D) structure of the xylem network and its function during drought in northeastern hardwood trees to (1) determine which tree species are most resilient under changing environmental conditions, (2) to establish physiological tipping points for each species, and (3) develop a model to predict widespread tree mortality. These data will inform conservation and timber production management by predicting shifts in tree mortality given current climate change scenarios.

This research has afforded undergraduates from Bates, Yale, and Harvard opportunities in research through the Harvard Forest REU Program. 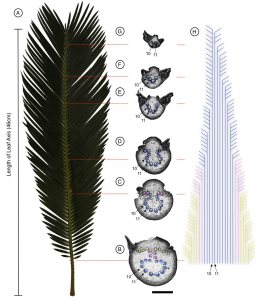 Plants commonly referred to as “cycads” belong to an ancient group among living plants, its members occurring as fossils from the late Carboniferous onwards as an initially dominant and widely distributed life form. The organization of the vascular system in the leaf axis of these plants has long been known as a diagnostic feature of the order Cycadales. While anatomical descriptions of various species of cycads exist, little is know regarding the three dimensional arrangement of the vascular network which supplies these plants with adequate water. The goal of this project is to conduct a thorough analysis of the three dimensional vascular network of cycad leaflets in an effort to better understand ecophysiological characteristics representative of species within Cycadales.

This research has afforded undergraduates from Bates College opportunities in summer research assistantships with support from the internal Sherman Fairchild Summer Research Grant. 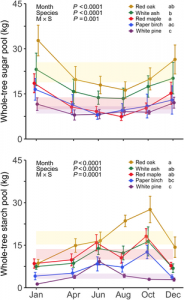 Trees store nonstructural carbohydrates (NSCs; i.e. sugars and starch) as reserves to support metabolic functions and growth, particularly during abiotic or biotic stress. Recent studies show that sustained defoliation events, triggered by drought or fungal pathogens, significantly impact the allocation of NSCs and thus compromise tree growth, photosynthesis, and stress response. My research in this area focuses on 1) the temporal distribution of NSC in temperate forest trees and 2) the impact of stress, particularly fungal and insect pathogens, on the redistribution of NSCs during stress response. Combined, these objectives aim to improve our understanding of the processes regulating the allocation and use of NSCs in forested ecosystems.