Shannon Walker Vaults Toward Olympics
Officials told her she didn’t have the upper-body strength. They told her women’s center of gravity was wrong. They even said she wouldn’t be able to bear children. Bates junior Shannon Walker knew they were wrong. Despite protests by officials and coaches, she was the first woman to pole vault competitively in the state of Massachusetts and is now preparing for the Olympic trials in Atlanta, Georgia, this summer.Walker became interested in pole vaulting in high school, even though it wasn’t even a women’s event. When Weston (Massachusetts) High School employed Jeff Robbins, who happened to be a pole vaulter, as the new coach, she asked if he would teach her the sport. He agreed.

Walker began competing her senior year, albeit unofficially, and in the men’s division. She persevered and won her first unofficial contest with a height of 9’6″. At season’s end, she met the qualifying height for postseason, but officials said she couldn’t compete.

“I hired a lawyer to get a waiver,” Walker explained. “I was allowed to go to postseason unofficially, but I didn’t place.”

Wanting to continue her pole vaulting, she chose a college with support for her sport in mind.

“Bates is very liberal and very open. I’ve had lots of support for my pole vaulting,” Walker said. “My decision was made during my campus visit when I stayed the night and people were so friendly.”

At Bates, Walker competes unofficially in men’s pole vaulting, plays goalie for the varsity soccer team in the fall, trains with the track team (she holds the school record for 100-meter hurdles), and continues her individual coaching from Robbins. She practices her pole vaulting twice a week at Bates with assistant track coach Tom Menendez and travels to Boston every two weeks to receive instruction from Robbins. In addition, she does drills around practice during soccer season. All this, and she holds a 3.86 GPA, too.

Since female pole vaulters are a rare breed, Walker has had to go all the way to the top to find competition.

Her first big contest came at the USA Outdoor Track and Field National Championships in Knoxville, Tennessee, the summer after her first year at Bates. Walker placed fourth in the exhibition event. Next, she traveled to England to train with vaulters there.

“It was neat to see how other people practice,” she said. “It was my first time in competition with just women; that was really weird.”

Walker showed what improvements she had made while in England when she placed third at the USA Indoor Track and Field National Championships in early 1995 and followed that performance with a fifth place at the 1995 USA Outdoor Track and Field National Championships in Sacramento, California. At both competitions, women’s pole vaulting was an exhibition event.

“It’s weird being at nationals,” Walker said. “In the middle of competition, Carl Lewis is running. It’s hard to concentrate on pole vaulting.”

Lewis isn’t the only track star Walker shares turf with. She watched Ben Johnson set the world record for the 400 meters and stayed in the same hotel as Jackie Joyner Kersey.

Indeed she has, and she has opened the door for many other women pole vaulters who previously have not had the chance to compete.

“I enjoy being the first person to do something neat,” Walker said. “And it’s nice to know you set something like that up.”

With a personal best of 11’3″ and currently placed third or sixth in the nation, depending on how it’s ranked, Walker will be competing this summer at the Olympic trials. Only the top twelve pole vaulters in the nation will go on to the Olympics, where women’s pole vaulting will be held as an exhibition event.

“I should be able to go, barring any catastrophes,” Walker said.

To train for the trials, she will be taking the winter semester off from Bates to work with Robbins. In addition, she will be doing an internship with a veterinarian. A biology major, she hopes to follow her Bates education with graduate work at Tufts School of Veterinary Medicine.

Walker hopes this year’s Olympics exhibition will lead to women’s pole vaulting being accepted as an event in the 2000 Olympics in Australia.

Why does Walker love pole vaulting? Well, because it’s different.

“Basically it’s just being in the air that I love,” Walker said. “It’s not an easy thing to do — you can’t just go out on the track and pole vault like you can go out and run any other race.”

Being in the air holds such a fascination for Walker that she got her pilot’s license in September. And Robbins has her doing gymcraftics, a balancing act that helps people learn what it’s like to be upside down, an important concept in pole vaulting.

Walker has it down to a science and hopes to go far with it while inspiring other women pole vaulters, which it seems she may already be doing without even noticing it.

“Sometimes I don’t really realize how much I’ve done,” she said. “There was another girl [a pole vaulter] looking at Bates and she said, ‘You have Shannon Walker, you won’t have room for me.'”

The Cheers Are for P.J. McGrail ’98
The quarterback called an audible at the line of scrimmage on this try for two points, so P.J. McGrail ’98 could only guess what was going on.

“I can hear it sometimes,” said McGrail. “I tried to see what was going on and read what everyone was doing. It was one of two plays. I had to guess, and I guess I got lucky.”

McGrail guessed correctly, adding the two points to his impressive totals that included thirty-three carries for 231 yards and two touchdowns and three receptions for thirty-nine yards and one touchdown, as Bates beat rival Bowdoin, 33-29, on the next-to-last game of the 1995 season. Fans poured out of the stands, tore down the goal posts, and toasted the end of a New England-record thirty-seven straight defeats.

The story goes far beyond these honors.

These are the types of stories that uplift the spirit and rekindle youthful dreams as wintry conditions grip the region. These are the positive stories, the ones you like to hear in a time of negative thoughts.

McGrail was born with deafness in both ears. He had to replace the twin hearing aids that kept getting broken when he played football with smaller ones, and has learned to adjust when audibles are called by quarterback Daniel Hooley ’97. There are no complaints, because McGrail lives life to the fullest.

“I was born with a hearing loss,” he said, “but I’ve always been involved in sports. I actually started off playing soccer. Friends talked me into playing football when I was in the eighth grade. Our town’s a really big football town with a good program. Through high school, I was friends with the quarterback [Ted Duffy, Holy Cross backup], and he understood my hearing problems, and in the huddle, he always made sure I knew what was going on.”

There are no limitations to what someone can do when the game is important. “It’s just something that’s part of you. It’s tough to walk away from it,” said McGrail. “I didn’t know if I was going to stop playing after high school. I was lucky to have the opportunity to play at Bates. It’s a great school. I’m getting a great education and the chance to play another four years.”

The injuries have been minimal. “I’d get hit and the hearing aid would be broken,” said McGrail, “and they’d have to take the pieces out. But I’ve had no injuries at all. I’ve gotten to know a lot of great people through football. I’ve been very lucky to be coached by a lot of people who made it fun and made it worthwhile. I’m sure you’ve heard of [Westwood coach] Eric Wilfinger [owner of a 106-11-2 record, 5-1 in Massachusetts ‘Super Bowls’]. It’s tough to not enjoy it.”

The moment of triumph at Bates wasn’t lost on McGrail. “It’s tough. There’s no question everyone works hard to prepare. You expect to win, and when you come up short, it’s hard.

“I actually think it shows a lot of character when some of the guys who have been there as long as they have come out every weekend and go do it again and try to get that win. It was nice for the juniors and seniors. I’m only a sophomore.

“It came down to the last play. The defense made a tackle at the goal line. When we stopped them for the last time, it was crazy. All the students came running out on the field and tore down the goal posts. I just watched and hoped that the defense would stop them. They came up big.”

So has McGrail, every day on the field and in the classroom, where he pursues a degree in economics. “I make sure on the first day of class I get a seat up front,” he said. “If I do have a problem understanding [the professor], I have no problem speaking up and telling the teacher.” There are no complaints, just a disciplined and straight-ahead approach to the game he loves and the classroom.

“We just let P.J. handle the situations,” said assistant coach John Griffin. “We call the plays. He concentrates on what he has to do and follows his blocking. That’s the whole key to it. It’s not just the individual effort by P.J. It’s just the whole offensive group working together as a unit. It’s tough sometimes for him to hear an audible with the noise, but he basically reads that block and follows his instincts. What makes him a great back is the instincts he has. We have people in the right positions helping him out. He’s a hard-nosed kid, and that’s exactly why I enjoy coaching him.”

After the awards luncheon, P.J. McGrail headed up I-95 to Lewiston in Griffin’s company, and parents Veronica McGrail and Steve Blume bid him farewell. “They’ve stuck it out with me,” he said. “They’ve been really supportive, especially when I went away to school and not getting a win. I can’t say enough about them.”

Bates lost its last game to Hamilton, but at long last, there was The Win. Doesn’t this all say something about the human spirit, creating a story to lighten the dreary New England landscape and give us something to applaud?

By Joe Concannon
Reprinted courtesy of The Boston Globe. 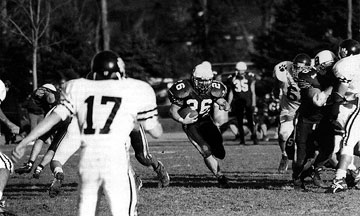 McGrail cuts through a big hole during his 231-yard afternoon versus Bowdoin this fall.

From more than 20 films screened at the 2022 Bates Film Festival, the Bates students who produced the festival have announced jury and audience awards in six categories.

One alumna dispels stereoptypes about dog breeds, another becomes a managing editor of The New York Times, and an alumnus is now a Maine harbormaster.

While the term “fume hood” itself doesn’t quite qualify as poetic, it’s nevertheless true that the recent installation of 18 such devices in Dana Hall...