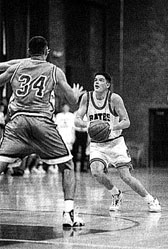 Long-range marksman Matt Garvey '97 of Amherst, Massachusetts, poured in the points during a record-setting basketball career. The guard ended with 1,921 points lifetime, the all-time Bates record.

For the coaches, throwing coach Joe Woodhead has now coached fourteen All-Americans in eleven years at Bates, with Kolter and Potter the most recent. Nordic skiing coach Becky Flynn Woods’89 was named Eastern Intercollegiate Skiing Association (EISA) Nordic Coach of the Year for the second time in three years. At the EISA championships, her father Bob Flynn received the EISA Service Award. The men’s squash team, coached by Paul Gastonguay ’89, ended at 18-4, the most wins in a season for a Bates squash team, while John Illig’s women’s squash team finished 12th in the nation at 16-9, their highest finish ever. Al Fereshetian’s men’s indoor track team and Dana Mulholland’s men’s swim teams each won CBB titles, with the swim team beating Bowdoin for the first time ever on route to a 6-4 record.