The son of a commercial photographer and film director, Ryan Heffernan ’05 came to Bates wanting to expand his own photography. He scarcely expected to discover a photojournalist’s dream story five minutes off campus.

During his first year, he started reading news stories about the Somali migration to Lewiston from Atlanta (Somalis fleeing their homeland’s civil war first settled in larger U.S. cities before moving to smaller and, from their perspective, safer communities). “I realized the golden opportunity I had, from a photographic standpoint,” he said. “I had to jump at it.” 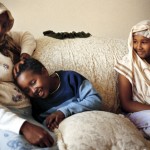 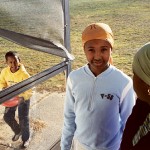 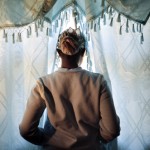 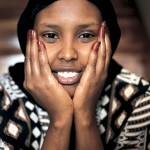 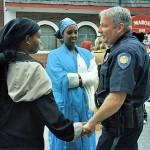 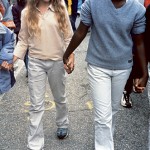 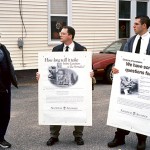 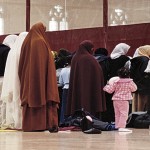 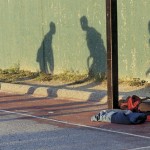 At first, Heffernan says, he would ride his bike downtown to the Kennedy Park area, park it, and walk around with his camera. “Sometimes I took photos. Sometimes I put my camera down and played basketball with the kids.”

To tell a story, a journalist requires access, a truth that predates “embeds” in Iraq and even Boswell’s dinners with Samuel Johnson. For Heffernan, access to the Somali community would be doubly challenging. A homogeneous Islamic culture, Somalis are wary of outsiders. Their wariness intensified during 2002-03, especially in the media-frenzied aftermath of the Lewiston mayor’s open letter asking the Somalis “to please pass the word” and stop settling in Lewiston. Some saw racist overtones in the letter, and the media arrived en masse.

“It’s hard for any media person to cover this story because of the nature of the Somali community,” Heffernan says. He recalls free-lance journalist Amy Toensing telling him how she was “looking forward to an assignment in New Jersey ‘where it’s not excruciatingly difficult to even talk somebody into letting you go with them to the park to take their picture.’ A lot of that difficulty stems from excessive media coverage.”

But as a student, Heffernan was greeted with less suspicion. “Lewiston is a very small town [fewer than 36,000] and the Somali population is even smaller [1,100]. I think it got out there that I was a student from Bates, that I was doing this project for myself, not for anything else,” he says. “I remember talking to Roda [Osman Abdi, owner of the Somali A&R Halal Market]. She said to me, ‘I remember when I was in college, so no problem.’ The fact that you’re a student can be a very big asset in terms of people realizing that you’re not out there trying to expose them.”

With the luxury of time and a Bates outlook that valued establishing relationships over selling images, he embarked on a documentary journey, shooting countless rolls of color negative film with his Leica M6. He didn’t know what would come of his efforts (he would ultimately hang a show in Chase Hall), but knew the project had captured him fully. “I remember always feeling guilty when I wouldn’t go to shoot,” he said.

Heffernan volunteered at the Lewiston Adult Learning Center in the ESL classroom. He also became good friends with a Somali family: Zam Zam Mohamed and her son and daughter, Hanann and Jama. He met Mohamed at a downtown support rally for the Somali community last October. “I was taking pictures,” he says. “She gave me a hard time, in a joking way.” A friendship developed, Heffernan eventually enjoying meals at their home and many visits with her and her children.

“Hanann and Jama were a huge help,” he said. “They were just open and fun. Kids are always easy to photograph. They’re innocent. There aren’t the cultural ties and issues that arise when you photograph adults.

“A photographer walks a fine line of whether you’re invading” someone’s privacy, Heffernan adds. “But once I got to know people, and they became familiar with me, things got easier in terms of access and them being comfortable.”

A studio art major with a secondary concentration in Spanish, Heffernan comes to Bates from Napa, Calif. He’ll spend his junior year in Seville, Spain, and Mendoza, Argentina — exotic and stimulating locales for a photographer, to be sure. Yet it will be lessons learned in Lewiston that he takes abroad. “The more you shoot, the more you see what works and doesn’t,” he says. “You try to tell your story from what you’ve got, but you’re never truly done.”

It’s easy for a photographer to be intrigued by another culture, he adds, because it “just opens your eyes and visually stimulates you. That’s the challenge when you’re not shooting things like that, to bring that mentality into everyday life. Look at the trite in a different way, and it can become beautiful.”