Stay in the Game

This story originally appeared in the Sumer 2004 issue of Bates Magazine.

Despite top-notch management, the Bates endowment continues to lose ground to its peers. Here’s why — and why it should matter to you.

“Our endowment is managed like a baseball player who’s constantly getting on base. We’re the Kevin Youkilis of endowments,” Greenfield says, referring to the Red Sox infielder who has an uncanny skill at getting on base. “The other side of this investment strategy is that we’re not trying to hit any grand slams, either. We’re diversified — we’re not trying to sit on just one pitch.” 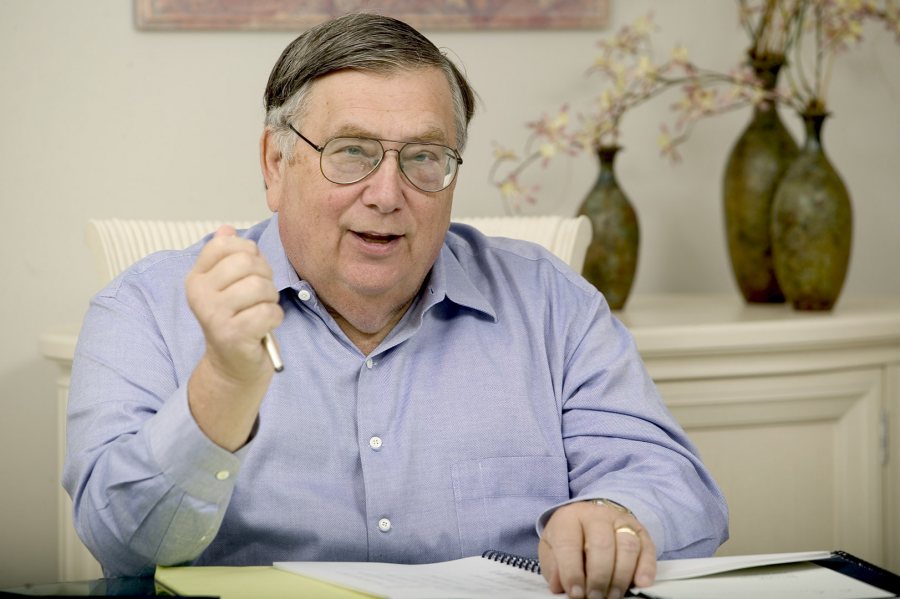 And with Bates embarking on the public phase of the $120 million, endowment-focused Campaign for Bates: Endowing Our Values, Greenfield can also explain the relationship between the endowment, fund raising, and Bates’ financial health.

While it’s not quite the bottom of the ninth, the campaign comes at a pivotal time for Bates. Despite impressive investment returns in recent years, Greenfield and others say that the endowment needs a significant influx of new gifts just to keep Bates in the game vs. wealthier NESCAC peers.

“The endowment is crucial to maintaining Bates’ quality and diversity,” Greenfield says. “Bates has gone from good to excellent. To sustain that we need a larger endowment. We’ve always needed it — but for the first time Bates could fall back without it.”

Greenfield assumed the chairmanship of the Investment Committee a decade ago, as he was winding up a 32-year career at Fidelity Investments, where he was director of research, ran the Fidelity Fund and, in 1986, launched the pioneering Fidelity Real Estate Investment Portfolio.

“Our duty is to manage the endowment for future generations.”

“When I went to Fidelity there were 39 employees,” he says. By his 1999 retirement, the firm had grown from a billion dollars in managed investments to nearly a trillion, and employed some 30,000 worldwide.

These days, Greenfield and his wife, Nancy Goldberg Greenfield ’57, summer in Massachusetts and winter in Delray Beach, Fla., where Barry’s retiree pursuits include golf and a weekly poker game. (A more serious sideline is handling investments for family and friends, including a New England Patriots football player.)

And if poker is about the anguish and exaltation of the endgame, then endowment management is about avoiding risk and staying in the game — an endless game. “Our duty is to manage the endowment for future generations,” says Greenfield. “You or I can chew up all our money if we want. But an endowment has to link past, current, and future generations of Bates students and faculty.”

In keeping with a long-term outlook, the Investment Committee’s goals are straightforward, yet the process is complex.

The team’s most important job is to allocate investments across asset classes (see sidebar “Widespread investing,” page 25). Various subcommittees also recommend the hiring and firing of money managers within these classes.

Currently, the Bates endowment is handled by 20 different managers, from big-name firms like Goldman Sachs to niche players like Axiom. For support, the Investment Committee counts on the Bates Treasurer’s Office and the consulting firm of Cambridge Associates.

Another subcommittee — chaired by David Foster ’77 — keeps abreast of the ethical dimensions of Bates investments, guided by the 1997 Bates policy on socially responsible investing, which emphasizes “ethical and reputable” business behavior by companies in which Bates invests.

Rather than investing boldly for overall growth, colleges invested narrowly, seeking dividend and interest income from stocks and bonds.

But in 1969, a landmark Ford Foundation study noted the poor investment record of college endowments. The report urged colleges to invest more broadly, seek growth, and focus on “total return.” Rather than spending interest or dividend income, a college would instead take a specific percentage from the overall endowment — 5 percent is the current standard — to spend on operations each year.

Subsequently, most U.S. colleges, including Bates since the ’80s, have embraced the total-return concept. “We don’t sit around anymore and clip bond coupons just to generate interest to pay into operations,” Greenfield says.

At Bates, the goal is to “maximize total investment returns” — dividends, interest, as well as market appreciation — “consistent with prudent levels of risk.” Diversifying the endowment over seven asset classes enables a college like Bates, despite its small endowment, to pursue investments across the risk/reward spectrum without stepping over the “prudent” line, Greenfield says.

Like its peers, Bates rebalances its asset allocation throughout the year to maximize performance. “It’s the most important thing we do,” says Greenfield. The Investment Committee also seeks to achieve an endowment performance that ranks among the top third nationally among colleges that report to the National Association of College and University Business Officers (NACUBO).

While investment performance can increase the endowment (19.3 percent in 2004) or decrease it, as happened during the market downturn of 2001 and 2002, two other factors also affect long-term endowment growth: annual spending from the endowment and, particularly, new gifts.

The College took painful but necessary steps to cut its spending rate. “We’re much more in line now,” Beckmann says.

Each year, Bates takes money from the endowment for myriad purposes, mainly financial aid and academic support. The amount spent, about 5 percent of the endowment, is fixed by the Board of Trustees as it assembles the College’s budget.

Three years ago, the committee asked Cambridge Associates to compare Bates’ spending rate with its peers’.

The sobering results showed that Bates was spending a significantly larger percentage than most peers.

Like most colleges, Bates spreads its investments across asset classes. As of June 2004:

* In the process of transferring funds to marketable alternatives, Bates had a high cash balance at the end of fiscal 2004.

“We were spending a bit more than 5 percent, on average, while most of our peers were spending less than 5,” says Treasurer Terry Beckmann.

So the College took painful but necessary steps to cut its spending rate. “We’re much more in line now,” she says. “It’s been difficult, because our retrenchment coincided with the 2001 and 2002 market downturn. Bates was committed, though, because the endowment’s long-term health was at stake.”

A lower spending rate means fewer dollars all around. “Bates has been in a clamp-down spending squeeze in recent years,” Greenfield notes. Only the most strategically chosen spending initiatives have gone forward, such as hiring new faculty to maintain a 10-to-1 student-faculty ratio and remain competitive with regional peers.

Cutting the spending rate is nice and prudent, but if Bates hopes to stay competitive with its regional peers it needs increased endowment giving — hence the $120 million Campaign for Bates launched this fall.

Gifts to the Bates endowment average $1 million less per year than schools with endowments of our size.

“Endowment gifts have grown substantially over the last 20 years, but we are still dramatically behind our peers,” says Vice President for College Advancement Victoria Devlin. In fact, the flow of gifts into the Bates endowment consistently averages at least $1 million less per year than schools with endowments of our size, according to NACUBO studies.

With Bates cutting its endowment spending rate and ramping up for its largest fund-raising effort ever, a question is posed to Greenfield. Could the Investment Committee help the cause, too, by pursuing riskier, higher-yield investments? Greenfield has the look of a cleric facing a blasphemer.

A bit stubborn, a lot savvy, Greenfield’s safeguarding of the endowment hasn’t gone unnoticed. “Barry’s contributions make a critical difference to the overall health and strength of Bates College,” says President Elaine Tuttle Hansen. “His involvement exemplifies the dedication of our entire board.” Working with the Trustees, says Hansen, now in her third year at Bates, “is one of the best parts of being president. I couldn’t do my job well without this kind of support.”

“An endowment is not a speculative vehicle.”

Greenfield deflects the praise. “We’re really not doing anything unusual today,” he says. “What we have done is emulate the process of large universities: establishing a professional process of subcommittees and the way we review our work.”

During the campaign and beyond, Greenfield says, diversification must continue to be the Investment Committee’s watchword. It’s a long-term policy that in the best years can help grow the endowment, and in the worst years safeguards it from “going down the tubes. For example, if the price of oil collapses, it won’t kill the portfolio,” he says.

But even the most sparkling efforts by the Investment Committee “can’t power up the endowment.” Power, he agrees, can only come from new endowment gifts.

Bates begins its historic campaign knowing full well that years of higher endowment spending and lower giving have stunted the growth of its endowment. Despite competitive investment performance over the years, the Bates endowment has fallen further and further behind its wealthier academic peers — “the Middleburys, Bowdoins, and Colbys,” Greenfield says. In other words, the rich have gotten richer.

Even sparkling efforts by the Investment Committee “can’t power up the endowment.” Power can only come from new endowment gifts.

And while each college spends a similar percentage of their endowments each year, the resulting difference in dollar terms is in the millions. “Our peers can — and do — direct more dollars toward their annual operations,” says Beckmann. “Bates is still financially healthy and fiscally sound. But where we can make careful progress in one area, like faculty support, our competitors make progress in all three key areas: faculty, facilities, and financial aid.”

Like Beckmann, Greenfield sees nothing alarming about Bates’ financial situation — today. But like any good investor, he tries to see the next sharp turn in the road.

“The image out there,” Greenfield says, “is that we’ve got a nice endowment, the school is pretty, and our reputation is going up, so why are we crying poormouth? Well, we need the money. Just to stay in the game.”