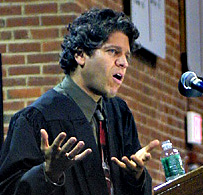 “Everybody who acts is uncertain,” author Paul Rogat Loeb told the Bates College community and its Class of 2008 during the Sept. 8 ceremony marking the start of the college’s 150th academic year.

But those who change the world do so despite their fear and hesitation, Loeb explained in a Convocation address extolling social and civic involvement. “Part of the definition of tackling large issues is trying to think beyond the bounds of what we’re told is achievable and what isn’t,” he said.

Known for books celebrating “the courage of ordinary people” who have committed themselves to community activism, Loeb addressed about 1,000 people in the afternoon ceremony. The crowd, gathering in Alumni Gym due to a threat of rain from the remnants of Hurricane Frances, included 476 students new to Bates — 467 first-years and nine transfers from other schools. (Read more about the Class of 2008.)

Themes of involvement, responsibility and self-fulfillment rang throughout the presentation. Zraikat, a citizen of Jordan, opened the ceremony with an Arabian parable about a local governor.

One of his subjects dreamed that the governor climbed halfway up a ladder of 1,000 rungs. When the governor learned of the dream, he rewarded the subject with 500 gold pieces.

But a greedy man heard of the reward and told the governor that, in his dream, the governor climbed all the way to the ladder’s top. The greedy man’s reward was 1,000 lashes — because, the governor said, “you got me to the top with nowhere else to go.”

Asking the new students not to take for granted the people they encounter every day, including the Dining Services staff who fix their meals and the custodians who tend their dorms, Zraikat cited the Bates tradition of enthusiasm, loyalty and mutual support. At Bates, he said, “You compete in order to better yourself.” 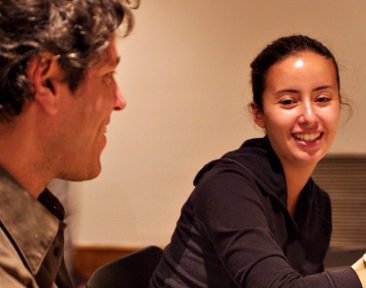 He emphasized the importance of perseverance. Parks, he said, had been a civil-rights activist for 12 years before her famous refusal to sit at the back of a bus. “If she had given up in three or five or seven or 10 years, we never would have heard of Rosa Parks,” Loeb said. “We don’t know the impact that our efforts are going to have.”

In an especially timely example during this election season, Loeb — noting the Wesleyan banner hanging among a NESCAC grouping at the back of the gym — recounted the example of a Wesleyan student who registered 300 new voters prior to election. Her congressional candidate won by 27 votes. “I guess I made a difference,” the student told Loeb.

Against the context of Maine’s national leadership in health-care and clean-elections legislation, Loeb told the Class of 2008, “You have the potential to set an example for the rest of the country.”

Loeb also deplored what he called “the ethic of bullying coming from Washington, D.C.” Citing what he views as Bush administration hostility toward questioning of its policies, he characterized the administration’s dismissive response to dissent as “shut up and color.”

“We have to be able to draw a line that says, ‘Excuse me, patriotism is asking the hardest questions at the hardest possible time.’ ”

Loeb visited Lewiston in the midst of a 20-city publicity tour for his new anthology, The Impossible Will Take a Little While: A Citizen’s Guide to Hope in a Time of Fear. The college chose his previous book, Soul of a Citizen: Living with Conviction in a Cynical Time, as its Common Reading Program title for the Class of 2008, assigning the book as summer reading and engaging the new students in discussions about it during orientation earlier this month. (Read excerpts from Loeb’s Convocation speech here, and more about Loeb here and here.)

Following Loeb at the podium, Hansen outlined four priorities facing the college this year. First was the faculty’s continuing effort to revise the General Education requirements (an effort that Hansen described, to appreciative laughter, as an “aerobic discussion of how to build academic muscles”).

The second is the campus master planning process, whose immediate focus has become improvements to student housing and to residential life, including the creation of a new dining facility. Third is the major fund-raising campaign that will be officially unveiled in October. Finally, Hansen referred again to an issue she first raised in her inaugural address, nearly two years ago: the search for ways to provide time for meaningful reflection within the pressured daily activities of the college.

For the second year tapping her own reflections during summer vacation — this year spent on the Jersey Shore against the backdrop of the media’s Summer Olympics coverage — Hansen closed her remarks with a few comparisons between the Olympics and the first-years’ likely careers at Bates.

While Olympic athletes and Bates students share the tenets of effort, commitment, creativity and achievement, Hansen said, the aim is not “the performance of a lifetime, but a lifetime of contribution.”

“Let the games of our next Bates year begin,” she concluded.