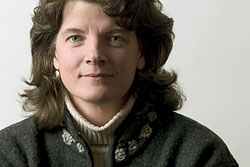 For many thousands of years, two species of large flightless birds shared the same habitats in Australia.

One was the emu, still thriving in Australia today.

The other was a bigger, heavier bird, known to scientists as Genyornis newtoni, that became extinct around 50,000 years ago — around the same time humans arrived on the island continent.

Why did one species disappear while the other survived? The simple answer is diet. Genyornis couldn’t adapt to radical changes in the available food supply, while the emu could, according to a geological study published in the July 8 issue of Science magazine and co-authored by Bates geochemist Beverly Johnson.

But the tale of Genyornis and the emu is the key to a much greater story, one that suggests the human capacity for affecting the environment. Today, much of interior Australia is arid, hosting only sparse, scrubby desert plants. Prior to the arrival of Australia’s first human inhabitants, though, that landscape supported trees, shrubs and nutritious grasses watered by summer rains.

It was that ecological change that doomed Genyornis and it was the human presence that caused the change, say the study’s authors. They theorize that those early inhabitants altered the ecosystem drastically enough, probably through large-scale burning, to cause the extinction not only of Genyornis, but of the continent’s large land mammals as well.

Moreover, the rapid transformation of prevailing flora apparently also affected the climate by reducing “biosphere-atmosphere interactions that promote penetration of monsoon moisture into the interior,” as an abstract of the study states.

This much-publicized research is based on the analysis of fossil eggshells from the two species, including shells collected in core samples and analyzed by Johnson. “You are what you eat, basically,” she explains: Different types of food leave discernible chemical traces in our tissues and, as in this case, in the eggs that birds lay.

Through the analysis of carbon isotopes in the eggshells, “you can determine the proportion of grasses consumed by the birds, relative to trees and shrubs. For an non-discriminating herbivore, such as the emu, the eggshell chemistry reflects the diversity of the ambient vegetation,” Johnson says.

In other words, the eggshell record indicates that “between 140,000 and 50,000 years ago, a wide variety of plants existed to support both the emu and the more picky eater, Genyornis,” she continues. “But shortly after humans arrived in Australia, beginning 50,000 years ago, the vegetation shifted to scrub. Emus could adapt, but Genyornis newtoni and most of the other large browse-dependent animals went extinct.”

So how do humans figure in the story? “Prior to 50,000 years ago, large climate shifts occurred, yet Genyornis was able to adapt to changing conditions,” Johnson says. “The critical part to all this is that the vegetation change and the extinctions occurred simultaneously at three different sites in Central Australia and at a time when climate was relatively stable.

“So there has to be another mechanism for the ecological changes that occurred at approximately 50,000 years ago,” she says. “The timing of these changes is nearly coincidental with human arrival into Australia, and therefore human activity is inferred.”

The researchers surmise that the repeated use of fire by those first human immigrants reduced certain types of vegetation critical to the diets of Genyornis and other plant-browsing fauna. More opportunistic feeders, such as emus, survived.

“We don’t present direct evidence for fire in this paper — it’s very difficult to get, though not impossible,” Johnson explains. “But we do show an ecosystem shift roughly coinciding with the arrival of humans.”

In addition, hunting and the introduction of diseases may have also contributed to the extinction of species, if not the change in plant life.

Led by Professor Gifford Miller, a geologist at the University of Colorado at Boulder, the research team that produced the study also included scientists from the Carnegie Institution in Washington, D.C., the Australian National University and Wollongong University, also in Australia.

Johnson, an assistant professor of geology, has been involved with this ongoing effort since the mid-1990s and, she says, “it’s going to be several more years, probably, before we get to the bottom of it.”

Using the same basic approach, the analysis of stable isotopes in organic matter, Johnson has shifted the current focus of her research to the study of vegetal matter found in sediment cores from northern Australia. She and Bates students also have ongoing paleoenvironmental research projects in northeast Siberia and in Maine salt marshes. Her overarching interest, as well as the techniques involved, is the same for all these studies: using geological evidence to try to understand changes in climate and the environment, especially changes influenced by humankind.

“If humans were capable of completely altering an ecosystem on a continental scale 50,000 years ago using fire, a relatively unsophisticated technology,” she says, “imagine the extent of our impact today.”

At first it may be, as Johnson puts it, “mind-numbing” to consider the human potential for impacting our surroundings. But the real value in this examination of prehistoric events lies in the lessons we can apply today. “If you can understand how the system responds to past human activity,” Johnson says, “you can potentially predict how it will respond to current human activity.”