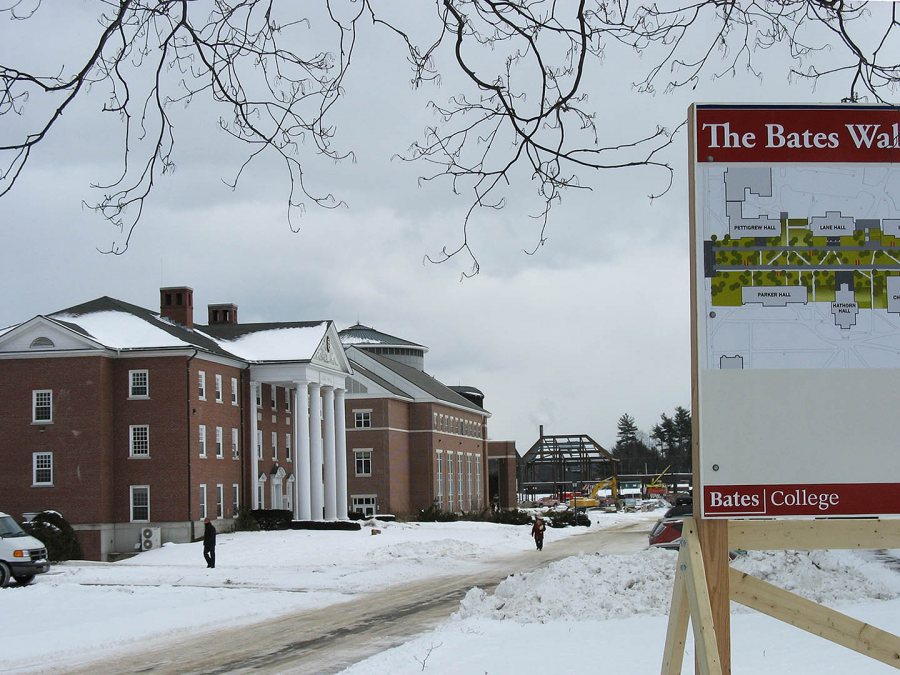 Walk this way: This image taken from College Street in February shows the site of the future Alumni Walk. (Doug Hubley/Bates College).

In April, work resumes on the cross-campus connector originally known as the Bates Walk, now officially titled the Alumni Walk.

This east-west corridor will run from College Street through what is now Andrews Road and up to the new dining Commons. Paul Farnsworth, manager of both projects, explained this week that Walk work will recommence at a site between Lane and Pettengill halls. 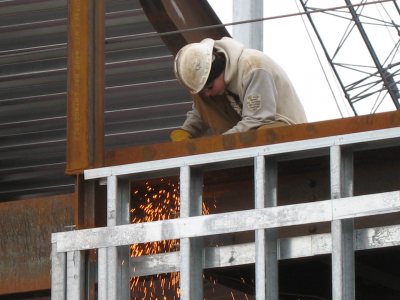 Thanks to the vagaries of New England weather, Farnsworth couldn’t say exactly when that project will start. But it is clear that it won’t be finished when Commencement weekend arrives on May 25, and consequently things will go a bit differently this year.

The graduation procession that traditionally forms up on Andrews Road will gather in the Lane Hall parking lot and walk up College Street, right past the new student housing.

New dining Commons: Structural steelwork is all but done on the Commons, Farnsworth noted. The Link-Belt crane that has hoisted all that steel into place was finishing its work March 15–16, lifting beams for the roof over the fireplace lounge. The crane, which has been visible from much of campus for two months, goes away early next week.

The Alumni Walk, to be completed next fall, will sport a variety of amenities that will make it an inviting place to meet, mingle and gather. Where a path currently undulates down to a parking lot by Lake Andrews, a small amphitheater will be built for classes and performances. Space is being allocated for public art. Pairs of facing benches along the walkways are intended to encourage conversation. After dark, light fixtures in the benches’ bases will make them appear to float. 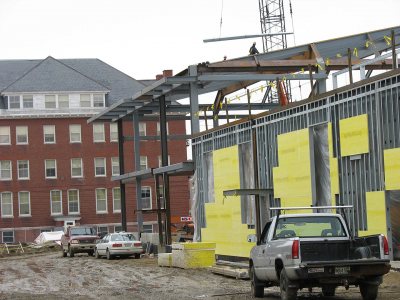 Photo Opps: See panoramic views of campus improvement projects Commons taken March 13. Click the links for the Commons itself, Commons in a southern view, in a northern view and the new student housing.

New Student Housing: On Libby Avenue, just blocks away from the new student housing being built next to Mount David, Maine Welding and Fabrication has been fabricating the stairs for the new residence, and was expected to deliver the components for the first of six sets this week. As previously reported, contractor Consigli Construction Co. is pushing hard on the kitchen-servery area, next to Alumni Gym, where the greatest concentration of infrastructure needs to be done. Though we won’t see the outer brick veneer for some time to come, the inner wall layers are well along — passers-by on Central Avenue are seeing a lot of yellow insulation these days — and a concrete roof layer will be poured by the end of month. 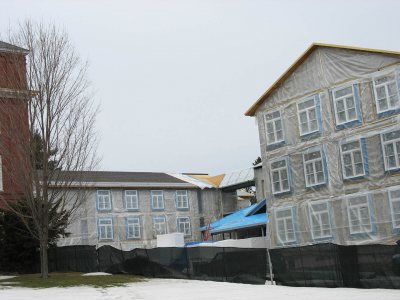 The largest flight will go into the center section of the three-part building, explained Susanne Grant, Bates’ clerk of the works for that project. “It goes from the basement all the way up to the attic,” Grant said, “so it’s a very big set of stairs.”

Otherwise, it’s business as usual for the residence project, Grant said. After last week’s subzero nighttime temperatures, a run of warmer-than-normal weather has been a tonic for the 80-plus workers on the job. “It just makes working inside and outside the buildings very comfortable right now,” Grant said.

The workers installing drywall finished the first story in each of the two wings, aka “flankers,” and expected to head upstairs next week. An insulation layer has been laid onto the west flanker’s roof, and a weather barrier on the center section is being started soon. 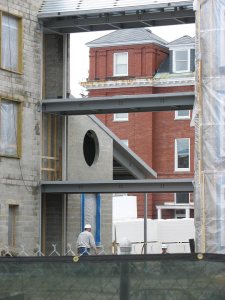 Toward the end of this month, we should start to see plastic wrap come off the flankers and the application of a 2-inch layer of insulating foam. During the first week of April, Grant said, the brick veneer will start to go on. Morin Brick Company of Auburn is supplying the two colors of brick for this project as well as the Commons, as we explained last week.

Two more will be planted this month, one between the Commons and Alumni Gym, and the other at the edge of the Library Quad, at a site where abatement work is being done on an old asbestos-covered steam line.

Notes from Underground: You won’t notice it once all is said and done, but it’s getting mighty crowded in the ground west of the new Commons. The latest hole inside the work-site fence is for the first of five steam vaults, chambers that will give Facility Services access to the lines that conduct steam from the central heating plant to much of the campus. That first vault — basically a big concrete box with holes in it for pipes, valves and manholes — should be in place by March 16.

Finally, a reader inquired about a one-day excavation right next to the entrance of Pettengill Hall. That was a test pit, Farnsworth explained, to determine the depth of an existing stormwater line that will be joined to a new line later on. Which affords a perfect segue to: 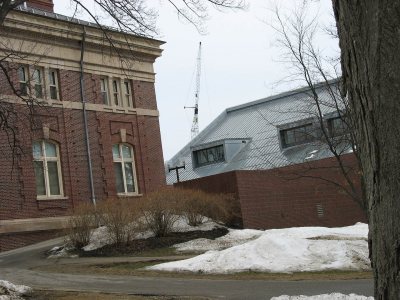 The Link-Belt crane, seen between Coram and Ladd, has loomed over campus for weeks. (Doug Hubley/Bates College)