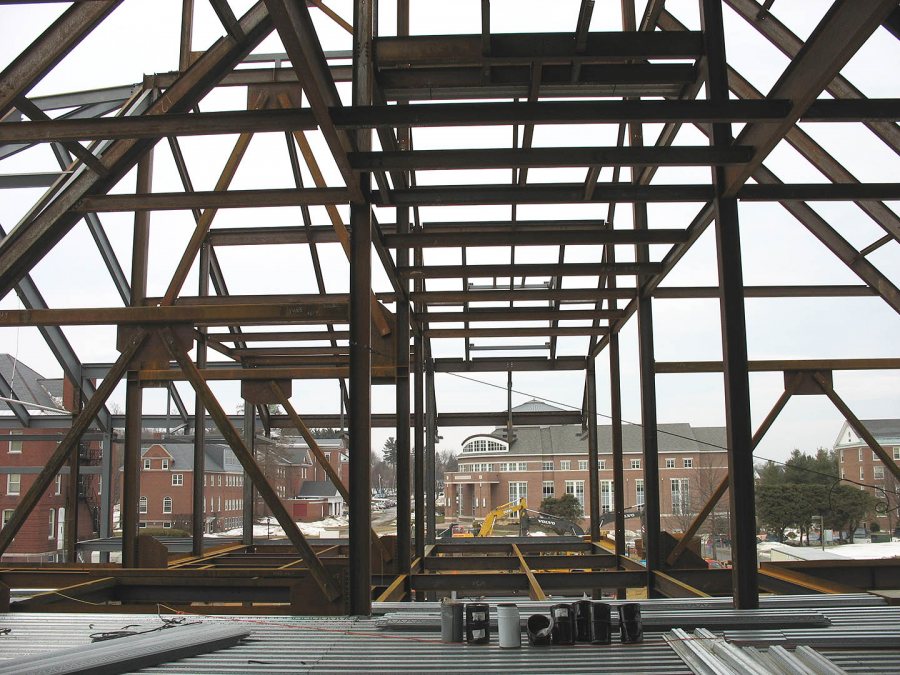 Second story, man: Taken on March 14 from the second story of the new Commons, the image above shows Pettengill Hall and other buildings to the west. (Doug Hubley/Bates College)

An interior tour of the new Commons on March 14 impressed Campus Construction Update many times over.

What was so impressive? So much steel overhead and so much ice-crusted mud underfoot. The fast pace and no-nonsense demeanor of the workers hired by contractor Consigli Construction Co. Most of all, the size of the building, the soaring space of the building’s main dining hall and the views of campus it will command. 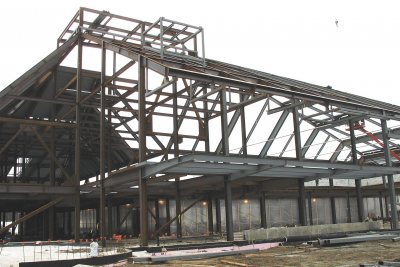 Paul Farnsworth, who manages the Commons and Alumni Walk construction projects for Bates, guided us through the facility on a cool, damp day. From the east entrance we went directly into a long corridor defined by steelwork on one side and plastic sheets on the other. That will become the Arcade, linking meeting rooms, offices and a convenience store with the dining area.

We followed the Arcade west to the future fireplace lounge — now just a foundation and some steel — and to the main entrance and dining hall. Shiny metal decking overhead in the Arcade gave way to a view of gray sky cut up by the steel skelton. Farnsworth pointed out the framework for the second-story dining mezzanine, which will afford views of the main seating area from above, and for a huge skylight near the peak of the roof that will light the seating area.

Even as we spoke, workers high overhead and the big Link-Belt crane were wrangling steel into place. (The structural steelwork was virtually complete and the Link-Belt gone by March 22). 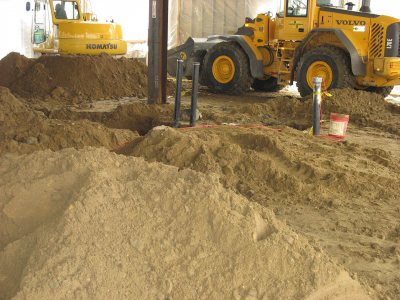 A heap of dirt where the pizza oven and serving station will be situated. (Doug Hubley/Bates College)

A ladder brought us to the second floor. Carefully negotiating the corrugations of the decking, we passed spaces that will become meeting rooms overlooking Garcelon Field, and watched workers on the roof deck above the kitchen and servery areas. The height afforded swell views west, past Roger Bill and Pettengill along the course of the new Alumni Walk, and north to the residential village.

We went inside the plastic tent to visit the kitchen and servery area. “At the moment the top priority is the underground work within that area,” Farnsworth said in a later interview. During our visit, the dirt had been thawed, excavation equipment was moving around, trenches had been dug for stormwater drains, a collection tank for cooking grease was in place and a heap of soil marked where students will eventually pick up their pizza.

During the week of March 26, Farnsworth said, concrete will be poured onto the steel roof decking that covers the kitchen and servery. Though more layers of roofing are yet to come, the concrete will give enough protection from rain to enable the roughing-in of walls and above-ground services. 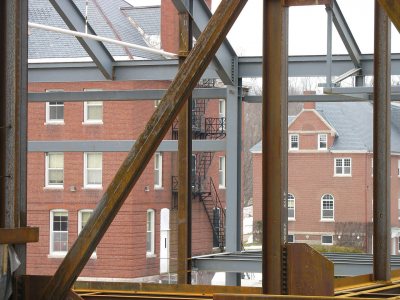 How does it all fit together? If you flew low over the new Commons from the
west, you’d first see a right angle two stories high. That contains the dining areas and lounge, the Arcade and its upstairs equivalent. Nestled inside the angle is the one-story section that houses the kitchen and servery.

New Student Housing: Let’s think twice before we bring Christo and Jeanne-Claude to campus. Thanks to Auburn contractor H.E. Callahan, we have a very nicely wrapped building right here already — the student housing being built next to Mount David. For days, the concrete-block building has been completely swaddled in construction-grade poly sheeting.

Why the wrap job? “To prevent water and snow being soaked up by the blockwork,” explained Susanne Grant, Bates’ clerk of the works for the project. “The next big step is to spray foam insulation on the exterior of the building, and if the block is wet, you can’t spray foam.” 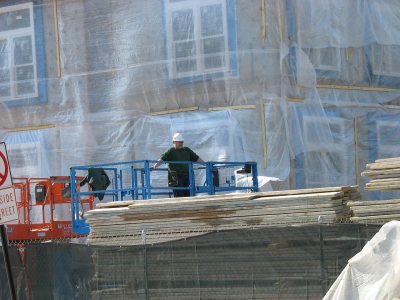 The 2-inch insulation layer should be applied next week, said Grant.

Meanwhile, out of the public eye, the interior work is charging along. Concrete was poured on March 22 to make beds for stairwells and the floors of the bridges that connect the two wings, aka “flankers,” with the center section of the building. The workers installing drywall moved this week moved to the flankers’ second stories, and should take it to the next level, so to speak, next week.

Notes from Underground: The second of five new concrete steam vaults was in place the week of March 19, at a site at the edge of the library quad. The process had been delayed by the need to abate asbestos. A third vault will likely be planted on the 22nd between Alumni Gym and the new Commons.

And the long-suffering service road that leads from Campus Avenue past Alumni Gym and the Gray Athletic Building goes back into surgery the week of March 26. “With the Gala this weekend, we didn’t want to dig it up,” Farnsworth said. “So we’ll get into it next week to tie Alumni Gym and Gray Cage into the new storm and sewer lines that we brought up.” 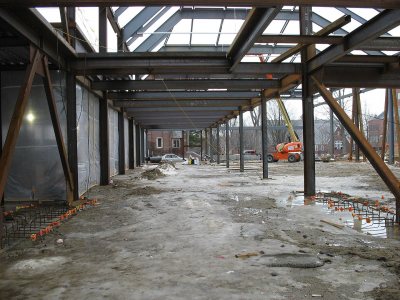 So, during your Gala pit stops, take a moment to say farewell to the old root-clogged drainage that has outlived its usefulness. It’s true what they say: We’ve all got to go sometime.