We knew the three-story scaffold staircase was safe, because dozens of construction workers use it everyday without incident. But nevertheless it wobbled, the stairtreads were small, and it was all exposed, so there was no question about how far away the ground was.

On the other hand, if one did take the express route down, all that mud would have made for a nice soft landing. Churned to a fine consistency by all the workboots, it was remarkable mud. It was mud like some crazy love affair — deep, clinging, complex and unforgettable. 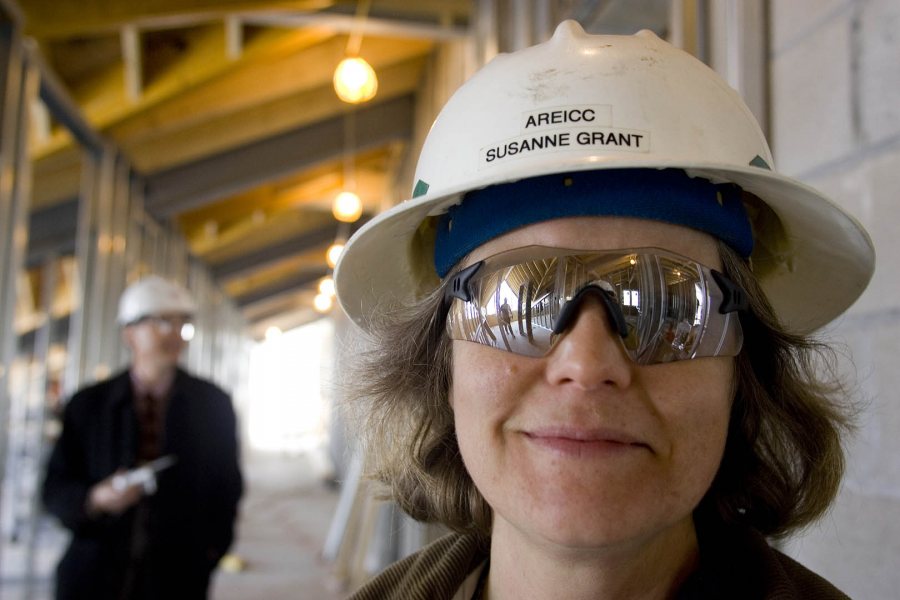 Those are a couple impressions from March 22, when Campus Construction Update and Bates staff photographer Phyllis Graber Jensen toured the new student housing at the foot of Mount David. We were accompanied by Susanne Grant, the clerk of the works for the project — the College’s eyes and ears on the job site.

Grant graciously gave us the grand tour. We saw all three stories of the east wing, aka “flanker,” of the three-part structure and the four levels, including the basement, of the center. We saw lots of gray concrete blocks and drywall, silvery steel wall framing and exposed pipes, translucent white poly sheeting that’s hung all over. Dense loops of wire for thermostats and computer hookups dangled like vines from the ceiling joists. We peeked into dorm rooms and bathrooms, sampled the fine campus views that 152 students will enjoy next fall and visited shadowy mechanical spaces that they may never see. 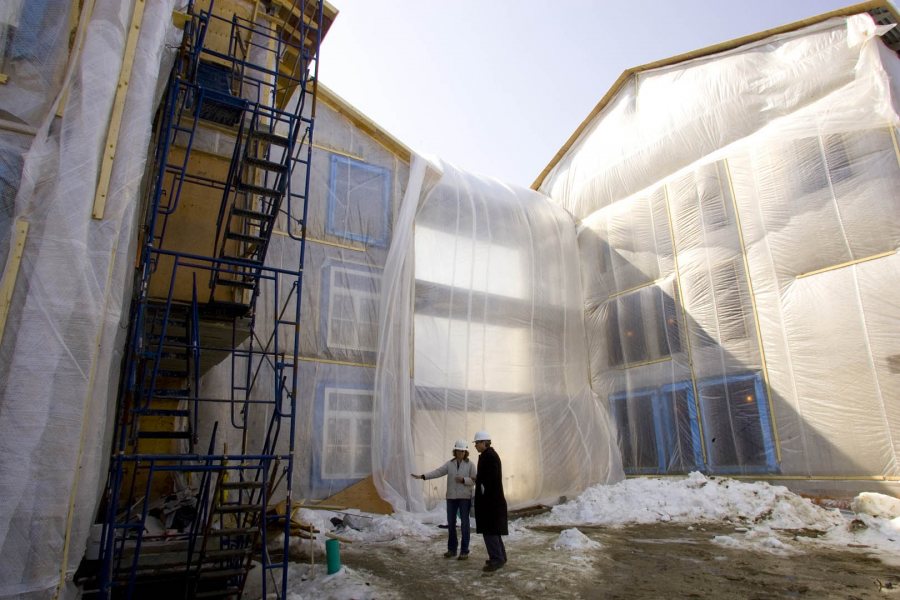 With about five months left until occupancy, the interior is well-enough defined to show the “cluster” concept realized by architects Shepley Bulfinch Richardson and Abbott. Student rooms, hallways, common rooms and even bathrooms form minicomplexes — like villages on an intimate scale — that, it’s hoped, will breed a sense of communal responsibility as well as camaraderie within each suite.

Especially impressive were the two lounges in the center section. The glass-walled fireplace lounge — open to the sun and the wind during our visit — will afford lots of light and some interesting views inside and out. In the basement, the large lower lounge will conjure up a clublike atmosphere for parties and performances. 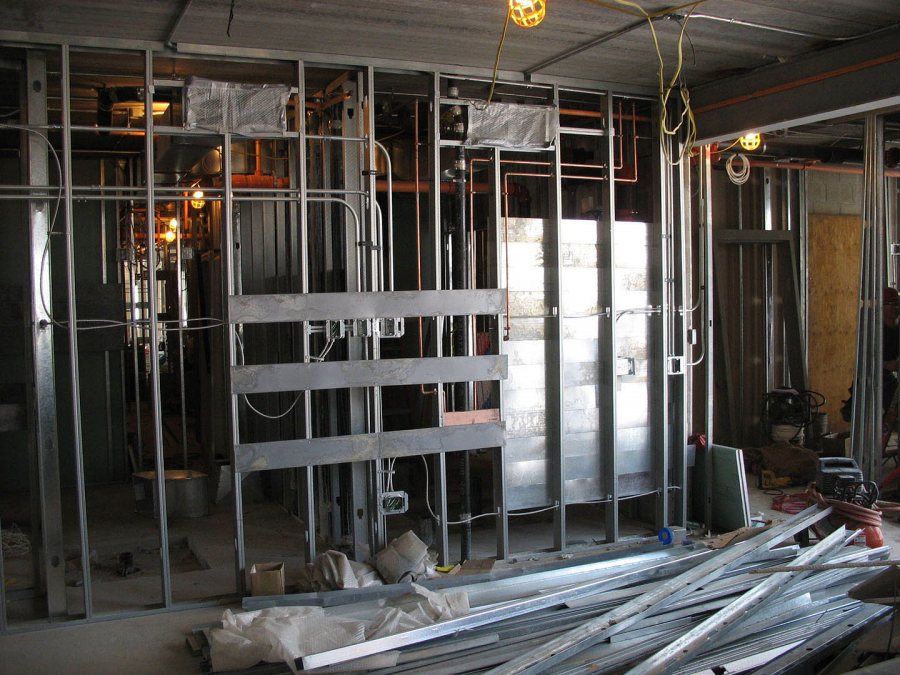 The tour afforded a good grasp of construction progress, as we went from the fresh gray drywall on the flanker’s first floor to the bare shining metal wall studs on the third. It was also up-close-and-personal exposure to the conditions on a building site — not just the mud under foot and the countless trips up and down scaffolding, but wacky temperature shifts, the constant clutter of construction materials and debris, the roar of wood saws and pipe cutters, and the glare of work lights.

While workers have been busy inside and out, exterior progress hasn’t been obvious to the casual observer. That will change the week of April 2, when the plastic wrap comes off and workers start spraying insulation on the flankers’ concrete block walls. At the same time, Grant said, the metal sheets that will form the top layer of the roof will start going into place. 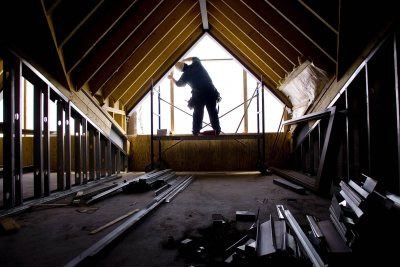 New dining Commons: It would take all day on March 29 to pour the concrete base for the roof over the new Commons’ kitchen and servery area, project manager Paul Farnsworth said.

The concrete would keep flowing in that area next week, he predicted, as the kitchen floor was poured — first some minor pours, such as depressed slabs that will be topped with insulation for the coolers and freezers to rest on, and then the floor slab itself. 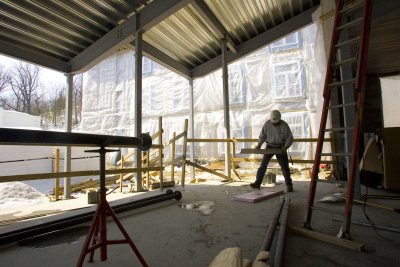 A carpenter at work in the fireplace lounge at the new student housing. (Phyllis Graber Jensen/Bates College)

With the hanging of additional beams on March 28 to frame the fireplace lounge at the building’s northwest corner, the structural steel for the Commons was essentially done, Farnsworth said. Also finished is the inspection of important welds at what are called “moment connections,” special joints that give the structure resiliency in strong winds. With those inspections passed, Farnsworth said, the pace of installing corrugated roof decking should pick up dramatically.

Finally, in a quick Note from Underground: “We’re trying to get out of the service road” that runs between Alumni Gym and the Library Quad, Farnsworth said. After months of opening the road up and closing it again for new stormwater and sewage drains, there’s one more connection to make, with the city lines at Campus Avenue, near Dining Services’ loading dock.

“Of course we work around Christine’s schedule,” he said, referring to Dining Services director Christine Schwartz. “Fridays are a big food delivery day.” 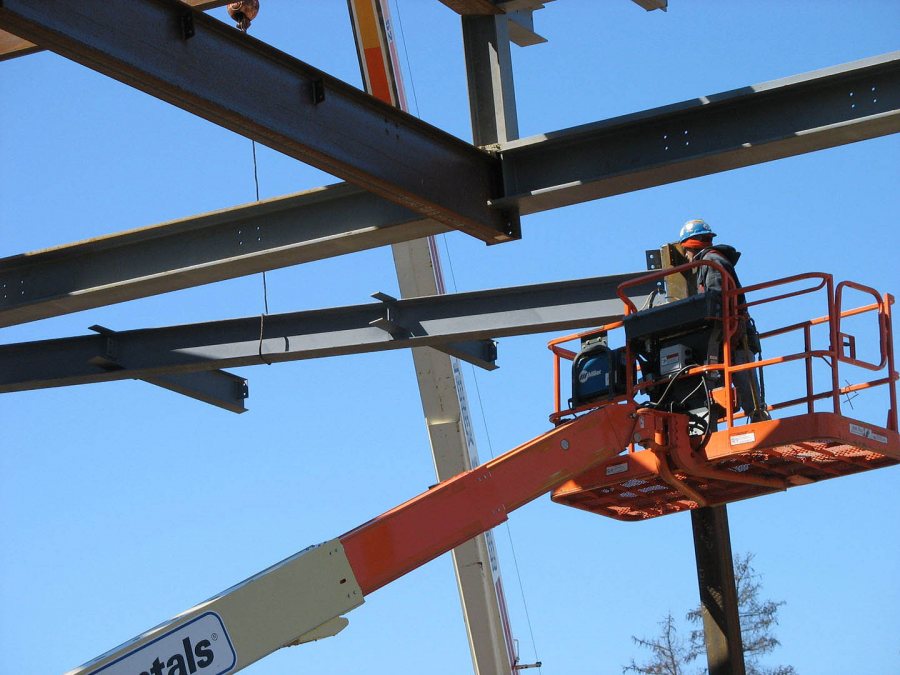