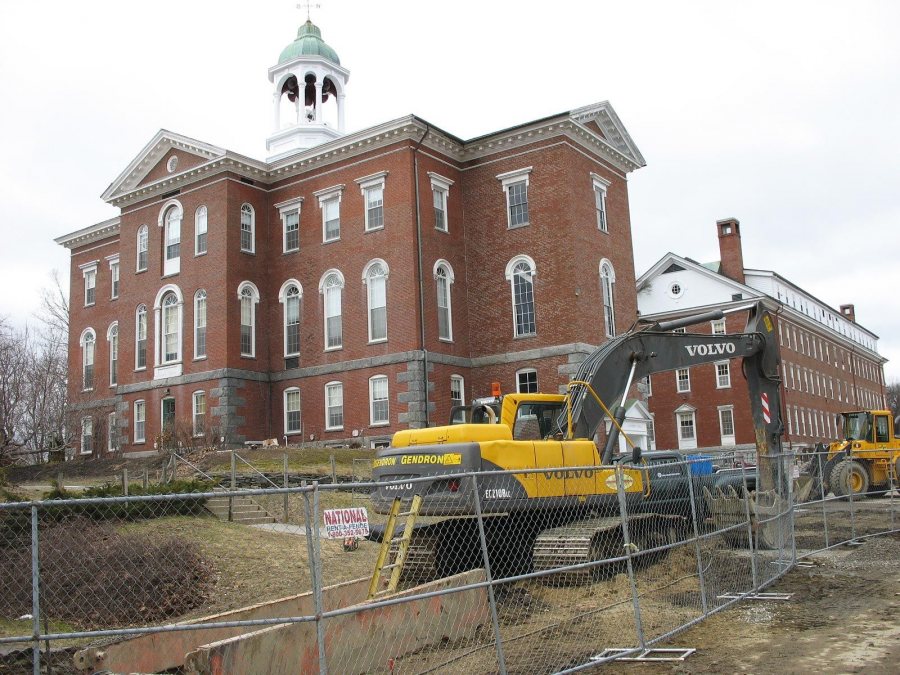 Hathorn hole: A ladder pokes up from a hole on Alumni Walk. (Doug Hubley/Bates College)

The latest assaults from the Winter That Wouldn’t Go Home were two northeasters: one that dropped 10 inches of sloppy snow on April 12, followed three days later by its big brother, a bully that brought more than six inches of rain and tree-cracking winds.

Lewiston was spared the worst of that storm, but it nevertheless slowed the pace of campus construction projects.

The second storm delayed by a day the start of work on Alumni Walk, the cross-campus connector supplanting Andrews Road. Winds gusting to 45 mph kept workers from installing steel panels on the roof of the new dining Commons. And at the new student housing, adjacent to Mount David, exterior work was stalled for days by rain and snow, 40-degree cold and the wind. 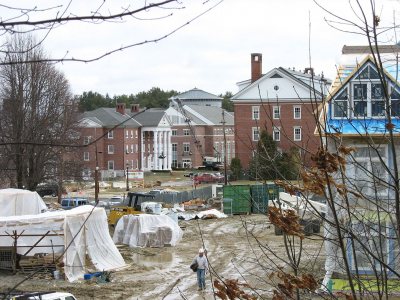 A view from Mount David shows the new student housing and the entrance to Alumni Walk. (Doug Hubley/Bates College)

Alumni Walk: Heavy equipment was in place along Andrews Road by Tuesday, April 17, and on Wednesday the road’s makeover began in earnest.

As planned, the College Street end of Andrews was closed and parking discontinued. The first of two holes behind Hathorn Hall was dug for stormwater infrastructure. To begin the amphitheater between Lane and Pettengill halls, workers removed plantings along the curvy path descending to the Lake Andrews parking lot. And a lattice-boom crane occupied the Lane lawn in anticipation of sheet-pile driving.

Among 11 trees sacrificed for this phase were the two maples guarding the Andrews entrance. But at the suggestion of President Elaine Tuttle Hansen, project manager Paul Farnsworth reported, wood from the trees has been reserved and will be evaluated for possible use in campus projects.

Sometime in the next few weeks, a big hole will appear near Pettengill’s main entrance. This latest excavation, Farnsworth explained, will accommodate several utilities projects. Drainage will go in at the deepest level. A new concrete steam vault for the campus-wide heating system will replace an old brick vault that was rehabbed during Pettengill’s construction. 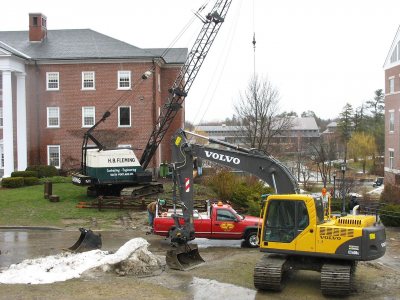 Finally, workers will plant a “duct bank” — conduits encased in concrete — for telecommunications lines. This system will include plenty of extra capacity for future growth. Doing all that will take several weeks, but, as Farnsworth explained, you only want to dig once.

The steam system work is especially complicated. After baseball season ends (and it hasn’t even begun yet, thanks to the weather!) and Leahy Field can be dug up, Farnsworth explained, “we’re replacing the steam line all the way from Facility Services up to Pettengill.” And the Pettengill site is crucial, with lines — some needing replacement — branching off to various buildings.

The repurposing of Hedge and Roger Bill after this academic year adds another wrinkle. It’s unknown where the mechanical spaces, and therefore the exact steam entry points, will be in those buildings, he said, “because we’re gutting them. We’ve made allowances to come from the new vault out to them, but we don’t know where the lines are going to go.” 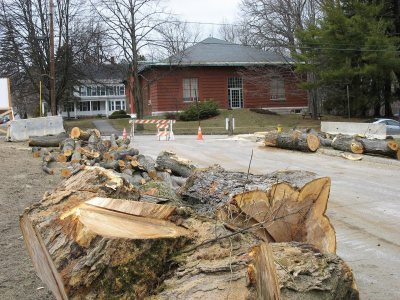 You may see this maple again someday. (Doug Hubley/Bates College)

And of course the weather is decisive, Farnsworth added, because they can’t start the project until it’s warm enough to shut off building heat.

Just one more reason to wish for an end to this endless winter.

New student housing: “This weather’s not helping us,” agreed Pam Wichroski, manager of the housing project.

“We had intended to start some of the brickwork this week,” she said. Before the brick veneer is laid on the residence’s two wings, or “flankers,” insulation has to be sprayed on. Before the April 15 storm, about half of the east flanker was green with insulation (better that than envy) and just a bit of the west wing. That’s enough to start bricklaying when weather permits, Wichroski said. She added that spraying could resume by Friday, April 20.

Now that insulating panels are all placed on the flanker roofs, the finish layer of traditional western-Maine style metal roofing could start to appear next week. Much of the roof will be medium-gray steel, but the valleys in between the dormers will be made of a Revere Copper Products material called FreedomGray. That’s copper coated with a zinc-lead compound.

This phase of roofing is likely to take a month. “It’s pretty tedious with all those dormers,” said Wichroski. “They’re actually soldered panels. It’s small-detail work.” 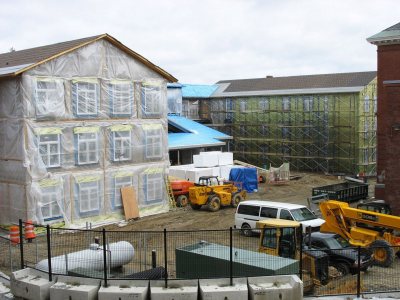 Meanwhile, work inside the three-section building continues at top speed. Components for the elevator have arrived and installation was expected to begin this week. The third of six stairways, and the first to be built in the center section, is just about finished.

New dining Commons: Pouring of the concrete slab for the Commons’ second level began April 19, Farnsworth said. The next big pour, at the northwest corner of the ground floor, will be done next week.

Meanwhile, the spray-on fireproofing described here last week continues in the southeast quadrant of the building, where the kitchen and servery will be sited. Also in this area, Farnsworth reported, workers have starting laying tracks for the wall framing, offering an initial sense of how that space will be divided. (Campus Construction Update will visit inside the Commons soon.)

As for the outside, the black granite base for the brick veneer walls should arrive by April 20, Farnsworth said. “They surveyed the building and actually cut the stone at the factory. So on site they’ll just piece it together, and they won’t have to do any more field cuts.”

Also next week, metalworkers who have been placing corrugated steel roof plates will finish, turning the top of the Commons over to the roofing contractors. We’ll be a little sorry to see the silvery steel plates covered — on the rare clear days we’ve had this month, it’s been a treat to see them gleaming in the sun. 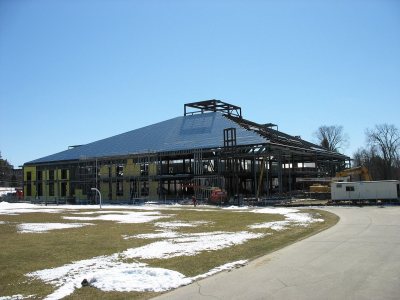 The new Commons in the sun. (Doug Hubley/Bates College)

Finally, inside the fence at the Commons site, Farnsworth noted that pipes will be laid to link the steam vaults planted earlier this spring. That work wasn’t done previously because digging would have impeded the Link-Belt crane that was hoisting structural steel.

“It’s a complicated business, isn’t it?” we asked, in a rare moment of lucidity.

“Everything has an impact on something else,” Farnsworth replied. “The one who is organized is the one who wins.”