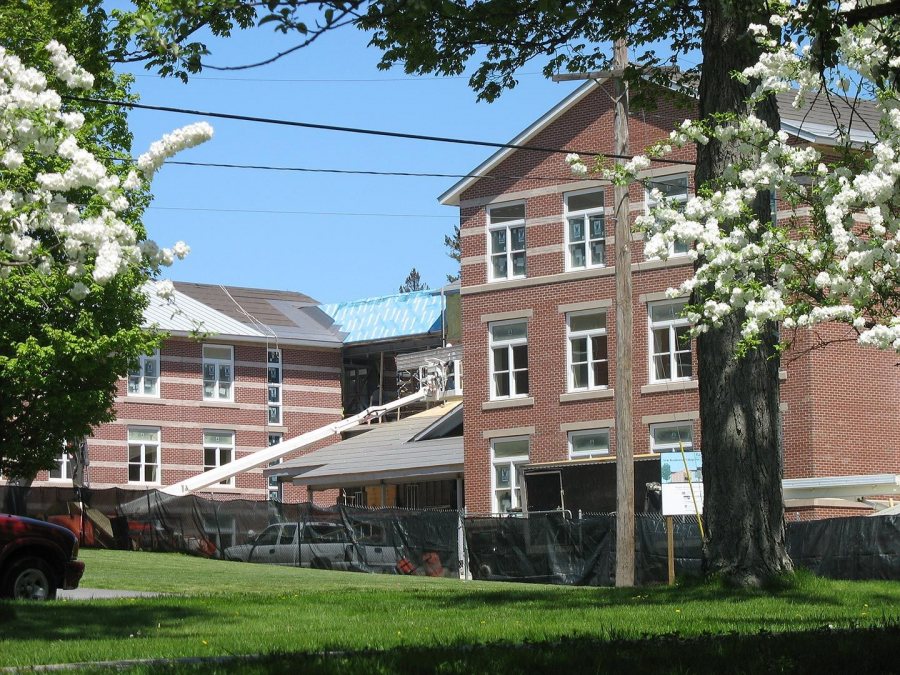 Engineers last week began the process of testing electrical, mechanical and other systems in the new student housing. The tests, which will continue until the College takes over the building sometime in July, are part of the building’s commissioning — a process of ensuring that everything works and looks as it should. 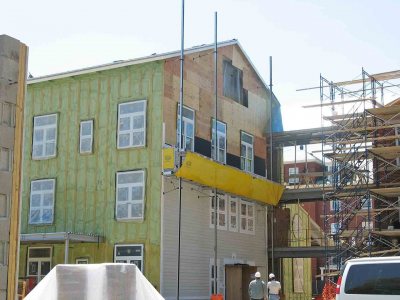 “Not only do you test to make sure the damper works appropriately,” said project manager Pam Wichroski, “but you make sure you have appropriate access to it. A lot of times if you don’t commission a building, they’ll put them in, then drywall over and forget about it. And down the road, if the damper gets activated, then you’re cutting drywall to reopen it.”

Commissioning new structures isn’t routine, Wichroski noted. Where architects and engineers used to do the kind of verification that is now part of the commissioning process, now “they go to the site just enough to watch and make sure the project is generally being built to the plans and specs. They don’t look at all that detail.” 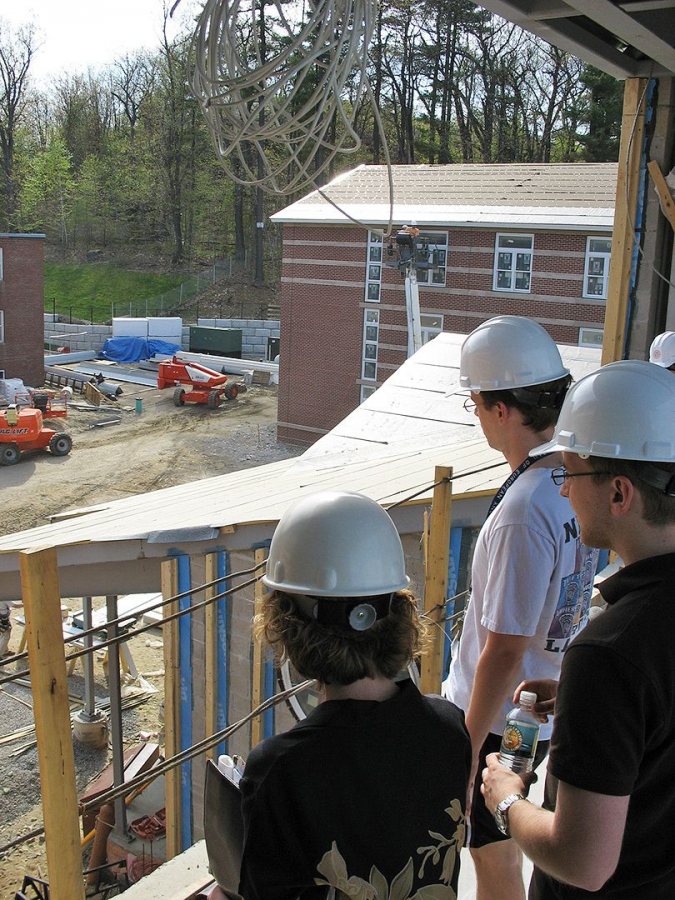 Students on a tour of the new housing catch the view from a bridge. (Doug Hubley/Bates College)

Wichroski added, “This is the first building on the Bates campus that will have been commissioned.”

Speaking of critical systems, the all-important task of hanging toilets has proceeded from the first to the second levels of the wings, aka “flankers.” Those areas are painted and tiled, too, and “we’re up in the third floors of both flankers, painting,” Wichroski said. “We’ll start doing some flooring in the student rooms this week as well.”

In the building’s center core, she noted, the elevator is up (and down) and running. Speaking of ups and downs, all of the staircases are done.

The number of workers at the housing site peaked in May at 90 or more. The building’s exterior treatments are far enough along that it’s no stretch to envision the finished product. “I would think by the end of May we ought to be pretty cleaned up and most of the outside work looking pretty complete,” agreed Wichroski. 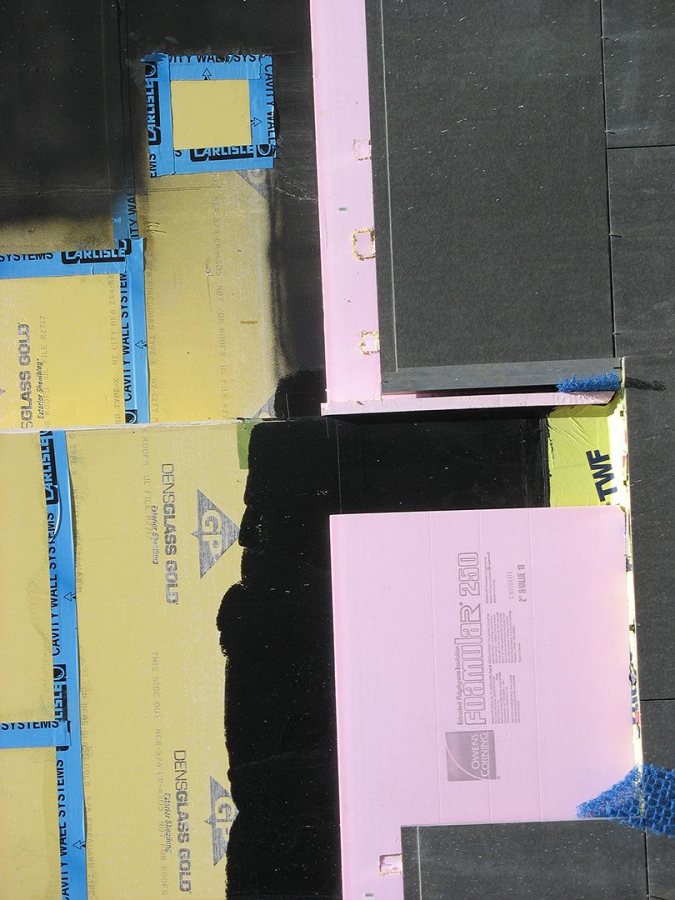 A patchwork of exterior wall materials, including the granite trim, on the new Commons. (Doug Hubley/Bates College)

Most of the bricklaying on the building’s two wings should be done this week. This week, too, workers started hanging the center core’s siding, a pale gray clapboarding made from a fiber-cement composite that’s an up-and-coming thing in building circles.

Meanwhile, installation of the window-walls for the student living rooms should be done by Commencement. The glass walls of the fireplace lounge, facing a patio complete with its own gas barbecue grill, should be installed within the month.

And roofing continues, with gray metal sheets going onto the flat expanses and, starting May 21, a gray copper product onto the sawtoothed dormers. Hand-fitting the latter is slow and tedious, Wichroski said.

New dining Commons: With occupancy still more than half a year away, the Commons construction is in a phase of intense activity but producing little news, reported project manager Paul Farnsworth. 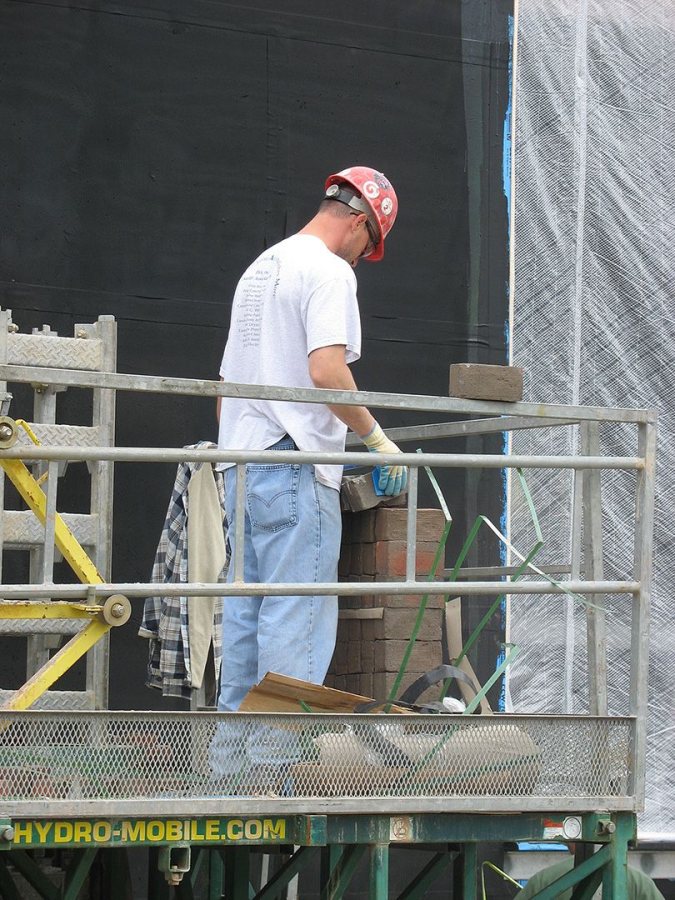 Work begins on the Commons’ brick veneer on May 24, 2007. (Doug Hubley/Bates College)

In something of a milestone, the Commons’ first stairway is now in use at the east end of the building, supplanting the ladders that workers had used for months to get to the second floor.

A forest of silvery steel wall studs has grown up in the kitchen and servery areas. Drywall work has begun with the protracted and fiddly process of fitting filler pieces into the flutes of the corrugated steel ceiling decks. Meanwhile, the roughing-in of electrical, mechanical and plumbing systems continues apace.

There were two other milestones on the exterior. Workers this week began laying slate, the finish layer of the roof, at the northeast corner of the building.

At the same time, bricklayers began their work, starting with the eastern wall near the loading dock. The slate is a deep charcoal gray, as is the granite trim at the base of the exterior walls. Dark gray bricks mixed in with the red ones will pull the visual aesthetic together.

Alumni Walk: Digging has begun for the Walk’s College Street entrance, which will take the form of stone pavement underlain by concrete. Otherwise, much of the work remaining at the Walk’s west end is grading and landscaping. 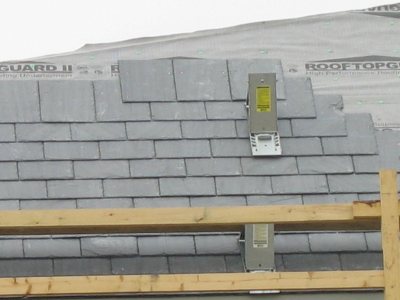 Heading east, all the new retaining walls lining the regraded slopes from the historic Quad to the Walk will be complete by the week’s end. And in front of Pettengill, workers began the excavation for a major utilities project on May 23.

It was no surprise when they immediately ran into disused electrical cables pre-dating Pettengill.

This part of campus, Farnsworth explained, is riddled with active and abandoned utilities. So the plan for this dig is to keep the hole’s surface opening as small as possible by making the walls vertical, braced with steel piles and wood, instead of sloped. Hence the piledriving boom crane parked in front of Pettengill this week. 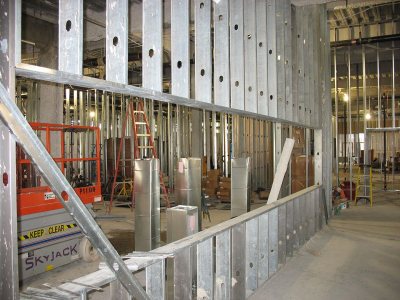 Steam is the theme, in fact, for much of what’s happening underground, as the College renews or relocates existing lines.

Next week, a steam vault will be planted in Leahey Field, at the edge near Central Ave. When this vault — basically a large concrete box that accommodates valves and junctions for the campus-wide steam-heating system — and its mate on the Commons side of the avenue are in place, the road will be dug up and they will be linked.

Before Reunion (June 8–10), a new steam line will be connected to Alumni Gym, with the work taking place in the parking lot adjacent to Central Avenue. In addition, an existing steam line to Roger Bill will soon undergo asbestos abatement and removal, with a new connection to follow later. The line to Dana Chem will be abated and a replacement laid in June.

“It’s generally the case with institutional construction that you have to do a lot of things to do one thing,” Farnsworth noted. But it works the other way, too: Complicated and expansive projects like the student housing, Commons and Alumni Walk can provide opportunities to check off longstanding needs. 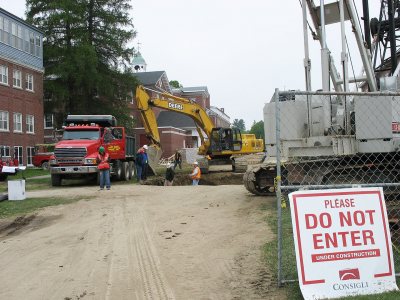 “Hopefully we won’t have to do these again for a long time,” said Farnsworth, referring to all the new utilities going in under the Walk.

Our Back Pages: Campus Construction Update appears every other week. See an index of other updates here.