Campus Construction Update: Week of May 7, 2007 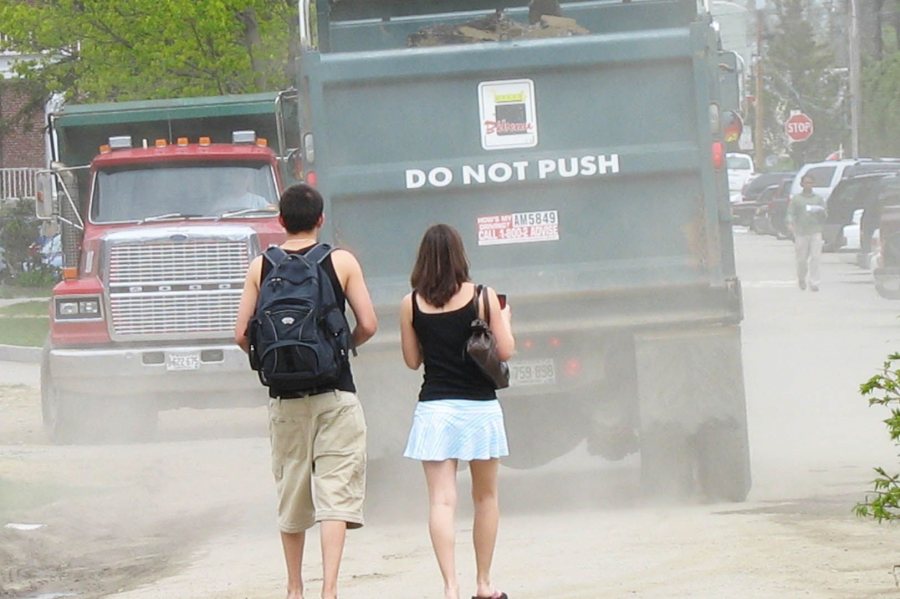 Like tea leaves, some parts of the built environment can offer clues about the future, if you know how to read them. The bases for light poles, for instance.

On the new Alumni Walk, the east-west pedestrian connector supplanting Andrews Road, six out of 14 of these concrete cylinders have been planted in the dirt. They won’t tell you much about your own future, but you can divine a bit from them about Alumni Walk.

For starters, the bases’ placement indicates where the Walk’s two parallel paths will go, because the lights will be sited between the lanes. (Along with the light bulbs, several thousand bulbs of the little blue spring flower called scilla will brighten this corridor.) 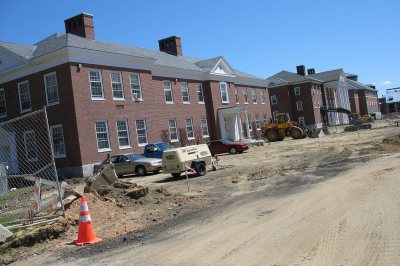 In addition, you’ll notice that some of the bases seem to stick up too high. As project manager Paul Farnsworth pointed out, the amount of base showing above the current ground level illustrates where the final ground level will be. The site will be regraded so that the Walk and the building entrances facing it will be at the same level, eliminating the need for stairs. So the ground will rise slightly at Pettigrew and Lane halls. 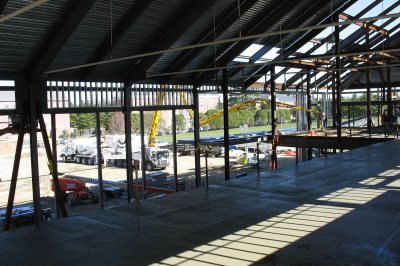 The mezzanine in the new Commons. (Doug Hubley/Bates College)

In fact, Alumni Walk work these days is all about the ground. Workers dig in it, planting telecom conduits and retaining walls. They push it around, regrading the slopes that lead between buildings up to the Historic Quad. They have exposed it, removing turf and asphalt from the College Street end nearly to Pettengill.

The naked dirt, which melts into muck in the rain and bakes in the sun, isn’t pretty. During windy days last week, dust peeled off the site in clouds, despite regular spray-downs from a water truck. At least, Farnsworth said, the gusts were mostly from the west and carried the dust toward the new Commons site. It’s so dusty there that a bit more is hardly noticeable. 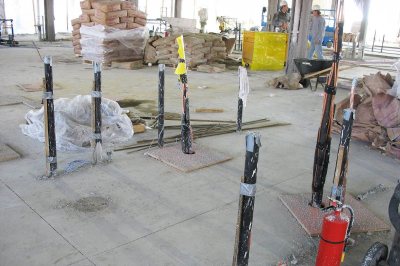 Anyway, the dirt is part of an omelette-and-breaking-eggs kind of deal. Relief is in site. Farnsworth noted that the trees for the Walk — nearly 180 paper birches — have been selected and tagged at a nursery in Canada. In another month or so, he added, the western end of the Walk will be done enough to show the shape of things to come.

“Once we stripped off the road, that space seemed to get wider,” said Farnsworth. “I think Alumni Walk is going to be quite grand, especially through one of the large windows of the dining hall, which looks straight down the walk.” 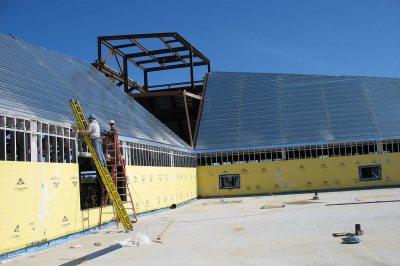 A view from the kitchen roof. (Doug Hubley/Bates College)

New dining Commons: Campus Construction Update got a chance to appreciate that view on April 24 during a tour of the building with Farnsworth. But the day’s featured attraction was concrete.

As we watched, workers finished pouring the slab for the second floor. The process is complex and fast-moving. One worker guided the massive hose, connected to a pumper truck, that dispenses the stuff. Others pushed the concrete with exaggerated trowels called floats to level it and evenly distribute the aggregate — the gravel and sand that form the bulk of concrete — throughout the mix.

Farnsworth also proudly described some of the innovations planned for the building: e.g., a new high-capacity tray-handling machine, an upstairs meeting room whose sound system will make all voices audible, a “flex dining” area configured with movable glass walls.

But all that’s seven months away. The placement of steel wall studs continues
around the exterior, Farnsworth said. Some of the big gaps indicate where windows will be — lots of glass. Other gaps await the application of fireproofing on the structural steel. 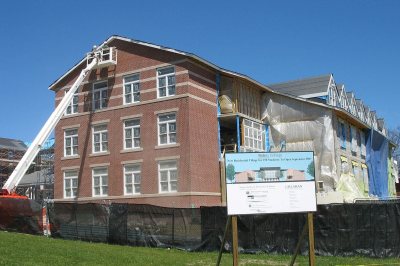 On the south wall of the exterior, facing Alumni Gym, masons are installing the black granite that forms the lowest course of the finish wall. Similarly sober is the black spray-on vapor barrier covering bright yellow insulating panels.

The roof over the kitchen and servery is all but finished this week. Its outer layer is a quarter-inch rubber membrane, colored white to reflect heat. Elsewhere up on the roof, it’s just sandwich-building, layering various panels and membranes on top of the shiny steel decking. 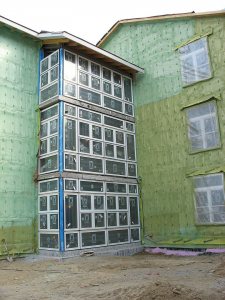 Inside, the floor-pouring ended May 7 with the main dining area. Wall framing is moving apace, with the kitchen complete and workers spreading out into other areas. Also on track is the roughing-in of mechanical, HVAC, electrical and other systems.

Farnsworth explained that contractors use “coordination drawings” to plan the order of this work. Architect Sasaki Associates provides a floorplan, “everyone overlays their stuff on it, and it passes through all the pertinent trades,” he said. “The mechanic looks at it, the plumber looks at it, the sprinkler guy looks at it, the electrical.”

Sometimes it takes some adjustment to the design to fix a conflict, but “most things get resolved by people looking at it — ‘Yeah, I can do this.’ ”

Certain systems take priority. Sprinklers and lights, for example, have to go where they have to go, and the remaining installations go in around them. “These contractors and subcontractors have been through this many, many times,” he said. “It’s a very cooperative effort.” 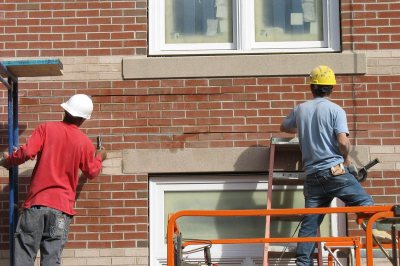 The Things You Learn Dept.: Bates was fortunate, Farnworth said, that pavers were able to put a base coat on the Library Quad service road, neatening it up in time for the Trustee meetings May 11–12. He explained that the asphalt plants only reopened for the season on May 7, mere days before the meeting.

Taking contrarian pride in our beaten but unbowed blacktop driveway at home, we hadn’t been aware that asphalt plants closed for the season. In fact, in Maine it’s too cold to produce asphalt in the winter, Farnsworth said. “Typically they close around Thanksgiving and open up when the weather allows in the spring.”

Not an unusual problem. What’s happening, says project manager Pam Wichroski, is that the subcontractors working on the exterior — masons, roofers, etc. — all need to work in the same confined space. So it takes some choreography to make this ballet happen.

Apparently the spirit of George Balanchine is lurking in there somewhere. The final layer of roofing, a medium-gray metal, has started to appear on the west wing. (In Bates parlance, the wings are “flankers.”) The brick façade on the west flanker of the three-part structure is all but done, and masons have erected staging to start the last phase of bricklaying on the east wing.

Also visible from the street is the progress on windows, notably the room-height glass walls of the student living rooms at the corners of the wings. Overall, project architect Shepley Bulfinch Richardson and Abbott has been generous with glass. With most of the windows now in place, “it’s just amazing being in that space with the amount of sunlight that comes in,” says Wichroski.

Looking ahead, Wichroski reported that a representative of Auburn architectural firm Harriman Associates, no stranger to Bates building projects, has been around. Harriman has been engaged as the commissioning agent for the new student housing, the party that ensures that the building will be ready to go when Bates gets the keys.

“He’s issued a schedule for all of the subcontractors so they know what pieces of equipment we’ll be testing when,” she said. “The real testing is intended to start on the 21st.”

Wichroski led a group of students and staff through the building on May 9, and we’ll show you some images from that tour when Update appears again, on May 24.