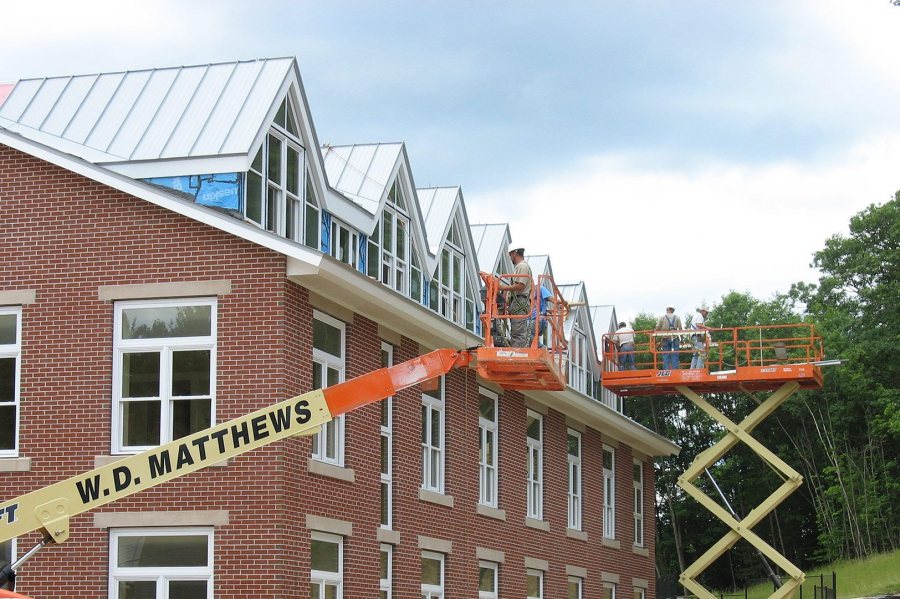 Wizards of oxide: Workers finish the gray-oxidized roofing on the west side of the new student housing. (Doug Hubley/Bates College)

The new student housing at 280 College St. should be ready for occupancy in August, right on schedule, said Suzanne Grant, clerk of the works for the project. But there’s still a ways to go before students can start hanging their whiteboards and Gene Pitney posters.

Engineers from Harriman Associates, the architectural firm commissioning the building for Bates, will be testing various systems for much of July. Site work has begun with brick walkways, granite curbing and other hardscaping, but plantings and other finishing touches haven’t been started. 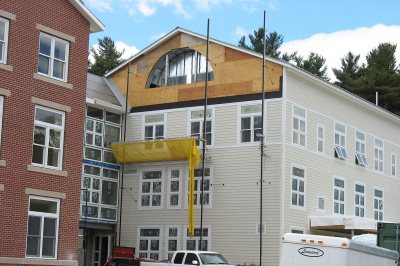 Like louvers do: This semi-circular hole in the center-section gable at 280 College Street will accommodate a ventilation louver. (Doug Hubley/Bates College)

On the three-part structure itself, the painstaking installation of the gray-oxidized copper roofing on the dormers is coming along. The west-wing dormers should be done by July 4 (a date that makes some weird kind of sense when you consider that Revere Copper Products calls this particular roofing material “FreedomGray.”) Dormer roofing on the east wing started July 2.

Meanwhile, most of the metal panels covering the flat sections of roof are in place. The exception is the south face of the center section, which will be done after the completion of a small rooflike structure behind the chimney that helps keep water out — in builders’ jargon, a “cricket” (although it’s three stories above the hearth in the building’s fireplace lounge). 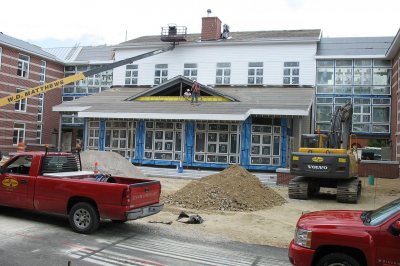 The window wall in the fireplace lounge, aka Frank’s Lounge, at 280 College Street. (Doug Hubley/Bates College)

The brick wall veneer on the wings, aka “flankers,” is essentially done. Likewise the composite siding on the center, except for two sections on the gables that are awaiting the installation, probably by mid-month, of air-intake louvers. The siding also needs to be painted white, a chore that has been started on the south side.

The last of the windows, constituting a glass wall on the fireplace lounge, are being completed now, said Grant. “We’re still working on interior finishes,” she added, estimating that the east flanker is about 75 percent complete and the west, 65 percent. There’s more to do inside the center section, and that work is proceeding from the third floor downward, since the student rooms on that floor must be readied for occupants. 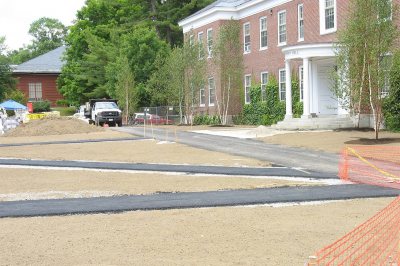 Finally, Grant reported, an important project originally planned for the second week of June was delayed. The long speed table crossing busy College Street and linking the student housing with Alumni Walk needs to be built this month for sure, she said. “The work is critical for the new housing since it provides safe access to the campus.”

Alumni Walk: We’ll save the champagne for another few months, but the construction of this cross-campus connector quietly passed a milestone in June. (Actually a second milestone, the first being the start of tree planting.) 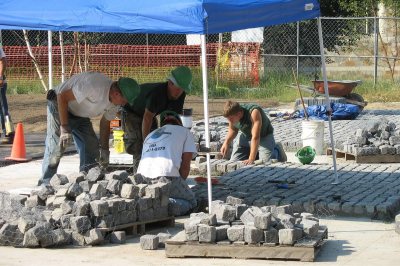 Late in the month, the project’s first permanent walkway was put into service, running north-south between the Lake Andrews parking lot at Pettigrew and the historic Quad at Hathorn Hall (see a campus map). Though it needed a second layer of asphalt as this was written, the path became functional “just in time for the Bates Dance Festival,” noted project manager Paul Farnsworth.

This path, currently marked “Andrews Road Crossing,” also provides a good vantage point for assessing the progress of Alumni Walk. (The walk’s entrance at College Street gives a useful view, too, especially of the masonry work, but watch out for traffic.) And, while there’s still plenty of bare earth and machinery, the west end of Alumni Walk affords a fair idea of how the finished product will look. 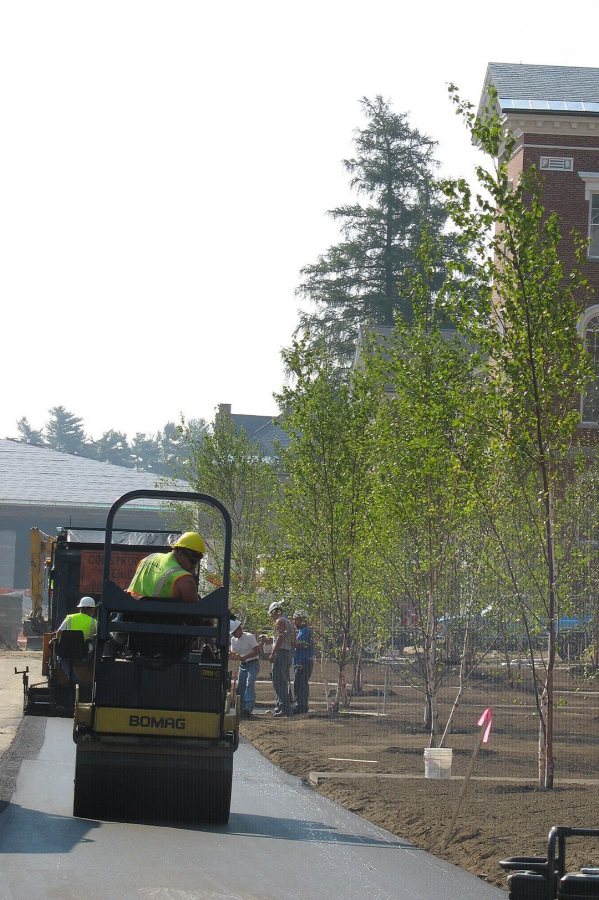 For instance, this section of the site has been graded, and strolling up the new walkway between Hathorn and Parker illustrates how dramatically the landform is being altered. Among other benefits, the new grades will improve access for people with mobility issues — access to both the walk itself and buildings facing the walk, whose main entrances will now be flush with ground level.

Of 180 or so paper birches that will eventually shade this entire 2.5-acre area, 40 were planted in June and another 40 should have their toes in the dirt by July 6.

Most strikingly, the College Street entrance, the west ends of the two main travel lanes and several crosswise paths have received some degree of paving. Since mid-June, masons have been laying rough blue-gray cobblestones at the entrance. Soon they’ll start paving the ends of the east-west travel lanes with smooth granite, another accessibility measure.

A short distance in, a test patch has been laid of the asphalt blocks that will pave most of the walkways and the building entrances. The pavers, made by Hanover Architectural Products of Pennsylvania, have an attractive finish that elevates them above their humble petrochemical origins. “You wouldn’t know it’s asphalt,” said project manager Paul Farnsworth. 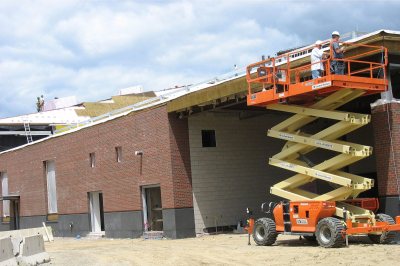 All these elements, plus a bit of imagination, add up to a pretty good picture of a site that will become a vital new crossroads for the Bates campus.

New dining Commons: The exteriors of the Commons and the new student housing show an interesting contrast. Sasaki Associates, the Commons architects, elected to complement the basic brick walls with dark gray stone, as in slate on the roof and granite trim on the walls. String courses of blackened bricks in the walls echo the theme. 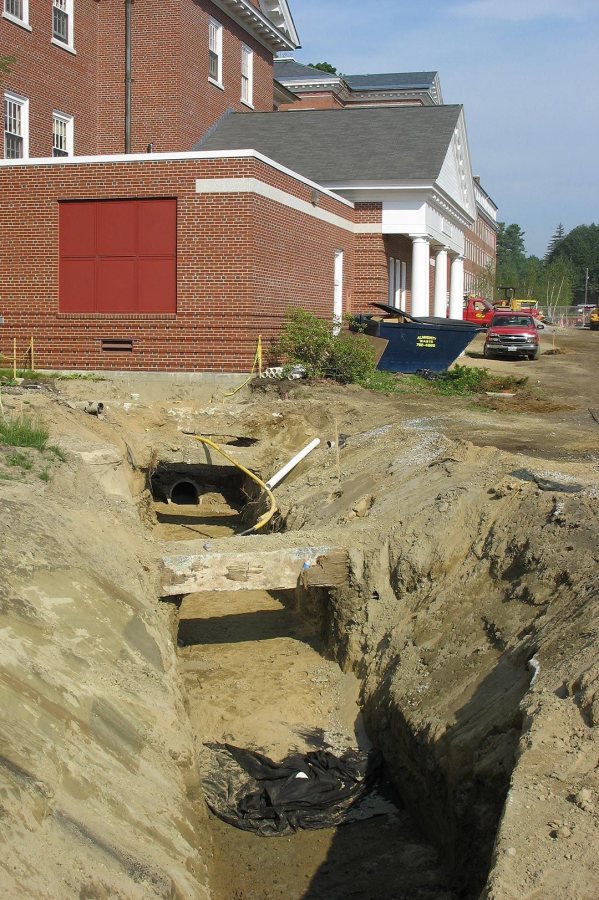 At the new student housing, at the opposite end of campus, architects at Shepley Bulfinch Richardson and Abbott have taken the opposite approach. The facility offsets the brick of its two wings with string courses of pale bricks and with white siding on the center section.

How or whether Alumni Walk, which connects the new facilities but was designed by Sasaki, mediates between the two color schemes is another question — and Campus Construction Update will buy a cup of new dining Commons coffee for the correspondent with the most enlightening answer.

But we digress. The slate on the north Commons roof is complete, Farnsworth reported, and roofers have moved to the west. Having essentially finished the brick and granite on the east and south walls, masons have headed around the corner to the north wall.

The creation of the interior, a process of mind-bending complexity, is proceeding in leaps and bounds. Much of the systems roughing-in — electrical, plumbing, etc. — is done, and kitchen infrastructure is showing up. Last week, for instance, a truckload of ventilation equipment arrived last week from Cote Crane & Rigging in Auburn, where contractor Consigli Construction and its subcontractors store materials. 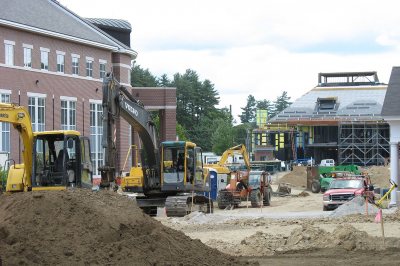 “Cote just trucks them over the day we need them,” Farnsworth explained. “It makes coordination a lot easier.”

This week, Farnsworth noted, the pizza oven will arrive, in three pieces, and components for the freezers and coolers are also expected. These units come in the form of insulated metal panels that are assembled like kits.

Downstairs, he added, “the big rush is to get the walls up so we can start to do interior finishes.” Workers are hanging drywall, and have started installing the ceiling support grid in the kitchen and servery areas.

Notes from underground: Farnsworth noted that an excavation for work to link the new and old drainage systems will close Pettengill’s front entrance from Tuesday, July 3, through Thursday, July 5. The building will be accessible through the rear doors — including, on Tuesday and Thursday only, the doors facing Smith Hall. Thereafter, he predicted, there will be only one more excavation for drainage work.

Elsewhere on the utilities front, devotees of Bobcats baseball will want to direct their thoughts elsewhere this week as trench diggers lay open Leahy Field. As part of an ongoing upgrade of the campus steam-heat system, a new steam vault (No. 5, if you’re keeping track) was planted in the field, adjacent to Central Avenue, in mid-June. The trenches are for pipes linking the vault with the campus steam plant, at Cutten Maintenance Center, and with John Bertram Hall.

The new steam connection to Alumni Gym was delayed by a fitting damaged in transit, but work resumed this week. Pipes connecting the big vault in front of Pettengill Hall (Vault No. 1) with Dana Chemistry and Hathorn halls should be laid in the near future. And the big trench hooking Vault 1 to the vault near the new Commons, No. 2, was closed in late June after a successful test of the lines.