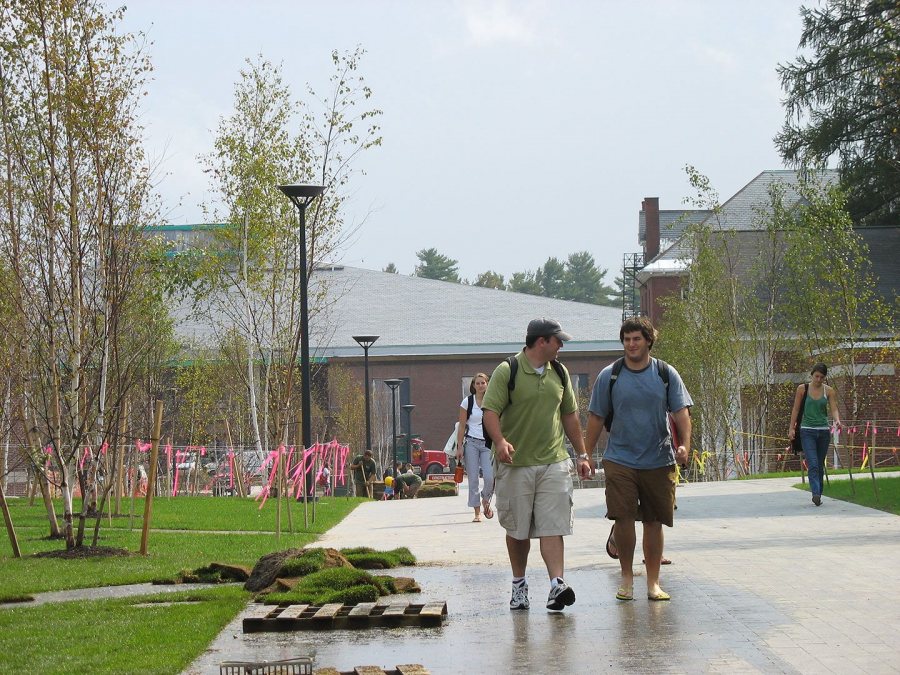 An afternoon thunderstorm on Sept. 27 occasioned an Alumni Walk first: emergency vehicles entering in response to a campus alarm. Although there was no fire, lightning caused a power surge in the fire detection system, frying a computer chip and setting off an alarm in Hathorn Hall. Two Lewiston Fire Department units responded to the call sent out by the system, according to Greg LaCroix, lead electrician for Facility Services.

The following day saw a different kind of thrill on the walk as it was opened to pedestrian traffic between Pettengill Hall and North Bardwell Street — the former city thoroughfare that is now the parking area for Smith and Adams halls. 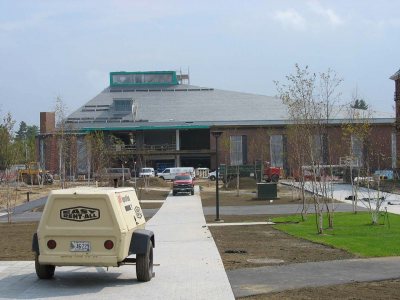 The opening was timed for Parents & Family Weekend. But there was no formal or dramatic opening, just the repositioning of construction-zone markers. In fact, the two main walkways have been fully paved for some time now and pedestrians have strayed into the construction zone east of Pettengill with little ado.

So what really seemed like a breakthrough as the festive weekend began on Sept. 28 was the opening of a broad blacktop connection between North Bardwell and the Library Quad. That removed the last north-south barrier on the walk. Also noteworthy was the newly liberated entrance plaza to Pettengill Hall, unencumbered by construction fencing for the first time in weeks.

Aside from paving, the other heavy Alumni Walk work was taking place in the space between Lane and Pettengill halls. Delayed by the unexpected need to replace a steam line, construction of the little amphitheater facing Lake Andrews resumed by the last week of September. Workers built a set of forms for the concrete steps and were grading the slope as the month drew to a close.

Cosmetic projects were also in progress, with the planting of the 140,000 scilla bulbs, the laying of sod and the erection of pole lights on the walk. The concrete benches for the walk would start to appear during the first week of October, said Paul Farnsworth, manager of the Alumni Walk and new dining Commons projects. But the lights mounted underneath the benches won’t cast their dreamlike glow for a while, as equipment for that system will need to be installed in Pettengill. 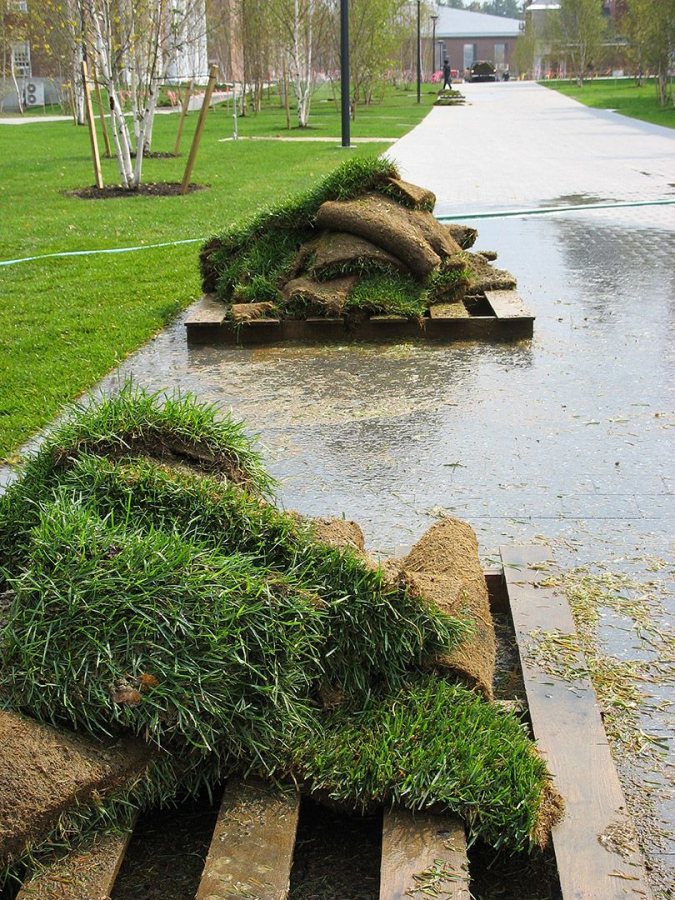 New student housing: With the construction workforce at 280 College St. dwindling fast, the most conspicuous activity this week has been paving.

The top coat of asphalt on the main walkway at College Street and Mountain Avenue should be completed Sept. 28. Asphalt crews are also finishing sidewalks around the building site, as well as finish-coating the roadway on Mountain Avenue where it was opened up for utilities work at the start of the new student housing project, way back when.

For a few weeks, new crosswalks configured for handicapped access have been in the works on College Street near the new residence. That project is mostly done — the final impediment being the demand for parking. Parked cars have continually blocked access to a crosswalk ramp opposite Ware Street, “and the contractor has not been able to pave the ramp,” clerk of the works Susanne Grant wrote this week in a campuswide e-mail. The contractor planned to try again on the 28th.

On the outside of 280 College, a fair amount of trim remains to be installed. Approved this week in mockup form, metal panels will soon appear between and around the window-walls of the living rooms and Frank’s Lounge (formerly known as the fireplace lounge). Metal trim and a wooden ceiling will cover the bottoms of the “bridges,” the aerial breezeways that link the sections of the building. 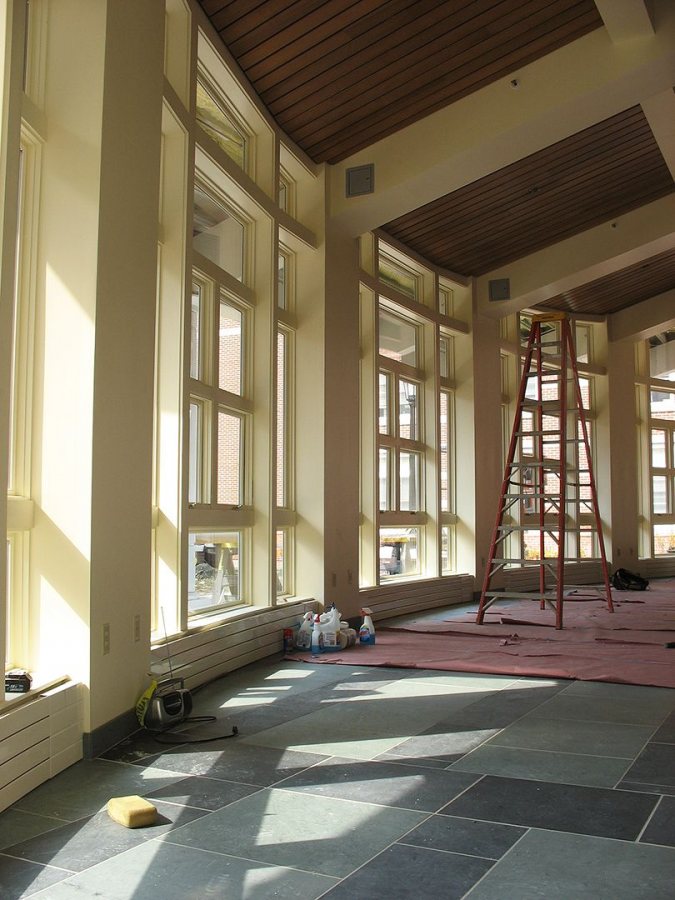 It’s not the quickest process, explained project manager Pam Wichroski, because “there are lots of trades involved in a small area” for each trim job. She expects the trim to be finished in early October.

Meanwhile, the last of four decorative fiberglass columns were erected on the porch of the Stangle Lounge on the 28th. Also in that courtyard, a replacement gas grill is expected next week, as the current unit was damaged in shipping. Students won’t have to miss next week’s predicted barbecuing weather, Wichroski noted: “The day the grill shows up, it can be connected” and fired up. Buon appetito.

The commissioning process is all but complete, with the testing of the steam-heat system the last major piece. That will happen when the campuswide heating plant is fired up, probably in October, and will take a couple weeks to complete, Wichroski said.

The Frank J. Stangle Lounge — made possible by a gift from Bruce Stangle ’70 and Emily Siegel Stangle ’72 in memory of Bruce’s father — has seen the last big concentration of interior work. And now it’s nearly done. With a small formal dedication planned for the Trustees’ October visit, “essentially, the lounge is ready to be used,” said Wichroski. Cleaning, touch-ups and the “punch list” — a final inspection process — remain to be done. Furniture goes in next week.

Wichroski noted that the city issued an occupancy permit for the lounge on Sept. 27. That same day, Campus Construction Update peeked through an open door and was impressed by the cherry-stained wood ceiling and the cool greens and blues of the flooring — to say nothing of the play of sunlight and shadows in this lofty, complex space.

Dana renovation: Parents & Family Weekend also provided an occasion for the campus community and guests to inspect two newly renovated labs in Dana Chemistry. Upgraded during the summer, labs 106 and 206 were gutted and extensively refitted, their new appointments including ceilings, flooring and nearly everything in between. 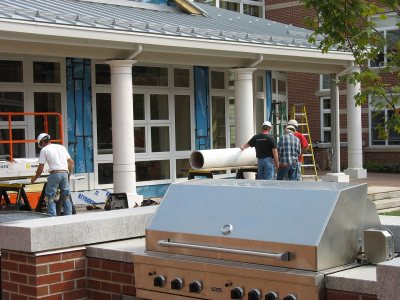 Setting up columns on the porch outside Frank’s Lounge. (Doug Hubley/Bates College)

A particular focus was the ventilation system. An additional exhaust fan was installed in the attic, while existing air systems got new motors and modern controls. Most important, early-1960s fume hoods were replaced with larger, all-glass models affording instructors better visibility into the units.

“The rest of the building is in decent shape, as renovations took place in other areas in the late ’90s,” said Facility Services’s Mike Gustin, who led the project. 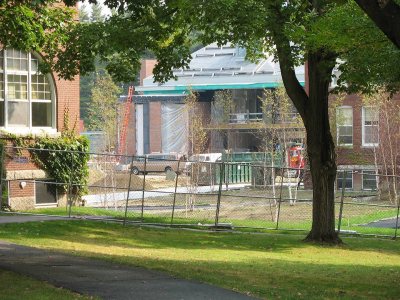 New dining Commons: What the heck are tip kettles and why does the new Commons need them when Dining Services workers don’t even accept gratuities? Find out on Oct. 12, when Campus Construction Update reports on a visit behind the scenes.

Readers write: “I’ve noticed on many nights that condensation forms on the roof of the new dorm and it virtually ‘rains’ off the roof from late night through early morning,” wrote Nick Bauer ’08.

The reason could be that the roof is metal, Wichroski suggested. Since metal cools faster than other roofing materials, condensation takes place more quickly and therefore more water rains off, especially during periods of high humidity and broad temperature swings. Which leads us to . . .