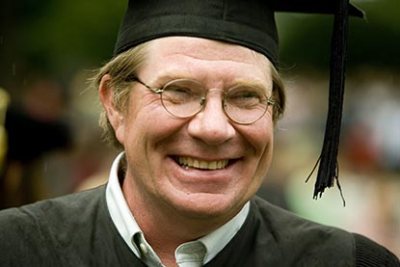 Robert Farnsworth, a poet and writer-in-residence at Bates, has received the 2008 Kroepsch Award for Excellence in Teaching. A member of the Bates faculty since 1990, Farnsworth teaches workshop courses in fiction and poetry writing as well as literature courses.

In his forthcoming Kroepsch address, “Psst!: Poems Teach Themselves,” Farnsworth will discuss the reciprocal process of reading and writing as an apprenticeship.

Farnsworth’s current and former students, including two recent prizewinning poets, credit their mentor for inspiring them to know and love literature and to be disciplined in the craft of writing. Emmy Spencer ’08 of Canaan, Maine, describes Farnsworth’s ability to blend encouragement with a sense of high seriousness that “demands a higher standard of thinking, learning and writing.”

Craig Teicher ’01 and Gabe Fried ’96, both of whom won first-book prizes in 2007 for their poetry collections, trace their current achievements to Farnsworth’s influence.

Teicher, recipient of the 2007 Colorado Prize for Poetry for Brenda is in the Room and Other Poems, praised Farnsworth’s “extraordinary” ability to guide a classroom conversation so that the “literature becomes both personal and exciting.” Farnsworth’s collaborative teaching style, says Teicher, “is the best way for someone to learn, by making the student figure out what they think by telling you.”

Fellow poet Gabe Fried ’96, winner of the 2007 Kathryn A. Morton Prize for his debut collection of poems, Making the New Lamb Take, credits Farnsworth for being the right teacher for young writers who’ve not yet found their voices. “Great teachers — of anything — recognize the strengths of the students in front of them,” says Fried. “Rob allowed us to explore our strengths and ambitions while making sure we could live with our shortcomings.”

At Bates, Farnsworth is teaching “Modern Irish Poetry” and “Poetry and Place” this semester; he also teaches a course on 20-century American women poets and one focusing on Robert Frost, Wallace Stevens and William Carlos Williams.

In 2006 Farnsworth held a summer residency at the Frost Place in Franconia, N.H., and that September delivered the College’s annual Convocation address. His poetry has been widely published in magazines in the U.S., Canada and the United Kingdom and in two collections from Wesleyan University Press, Three or Four Hills and a Cloud and Honest Water.

He received the PEN New England Discovery Award (2005) and held a National Endowment for the Arts Fellowship in Poetry (1989–1990). He earned a bachelor’s degree in English from Brown University and an M.F.A. from Columbia.

Farnsworth is highly regarded in Maine for his many appearances as a poet, scholar and facilitator for literary gatherings in small towns and cities, especially under the aegis of the Maine Humanities Council, and for his writing workshops sponsored by Maine Writers and Publishers Alliance.

Farnsworth once fretted about the muses who inspired his teaching. “I started teaching college when I was 26, and in my 30s I realized that I sounded just like my teachers,” he says. “The words pouring out of my mouth were the words that were poured into my ear.”

The realization caused some anxiety of influence in Farnsworth. Yet he came to believe, more strongly as the years passed, in what he’d heard at Brown and Columbia: that discipline is important — “you have to really dedicate yourself to singing school.”

He’s not suggesting an ascetic self-discipline, but rather the vigilance required of any educated person in order to create bright new ideas from disparate and pieces of knowledge. The power to create metaphor, “to make comparisons that contain within them dissimilarities that are just as interesting as the similarities, is the big engine of thought,” says Farnsworth.

“Writers should be ambitious” in this sense, he adds. “They should do something that deserves to be read and that rewards reading. They should carry that seriousness of purpose, which Michael Harper made clear to me in one way and writers like Edwin Honig in other ways.”

The more years that Farnsworth teaches, “the more I feel I owe it to my teachers to carry on what they did for me.”

The late Robert H. Kroepsch ’33, LL.D ’71, established in 1985 the Ruth M. and Robert H. Kroepsch Endowed Fund for an award to a member of the faculty, “in recognition of outstanding performance as a teacher during the previous 12-month period.” The honor, which carries a $5,000 award, recognizes a faculty member’s ability to stimulate student interest in the subject, foster desire for further learning, help students understand subject matter in a broad context and encourage a high level of student performance, among other criteria.