Expert in ethnomathematics, math history to give Sampson Lecture 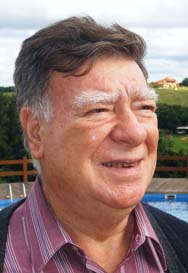 Ubiratan D’Ambrósio, an authority on the fields of ethnomathematics, math education and the history of mathematics, offers two talks at Bates College on Thursday, Sept. 18.

Sponsored by the Bates Department of Mathematics and the Office of Multicultural Affairs, both events are open to the public at no cost. For more information, please call 207-786-6237.

He is the author of Education for a Society in Transition (Papirus, 1999), Ethnomathematics: A Bond Between Traditions and Modernity (Autêntica, 2001), Ethnomatematics (Pitagora Editrice, 2002), and many other books and articles.

He has served as chief of the Unit of Curriculum of the Organization of American States, a member of the Council of the Pugwash Conferences on Science and World Affairs, and a member of the Governing Board of the Institute for Information Technology in Education of UNESCO.

The Richard W. Sampson Lecture at Bates honors the memory of Sampson, professor emeritus of mathematics, who served on the Bates faculty from 1952 until his retirement as professor of mathematics in 1990.