2009 King Day Keynote: Who Plays King in the Age of Obama? 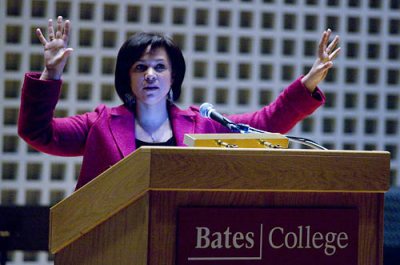 Melissa Harris-Lacewell was hoping to illustrate her Martin Luther King Jr. Day keynote address at Bates with some projected images. But balky technology was making that impossible, the scholar explained to her audience in the Olin Arts Center Concert Hall.

So instead of showing the images, she would describe them. “After all, every important African American art form — jazz, rap, hip hop — is based on improvisation,” she quipped.

See a slide show about the 2009 MLK Day observance.

Watch a short video of Melissa Harris-Lacewell previewing her talks.

Harris-Lacewell began her talk by recalling the Democratic convention in Denver, where she saw street vendors selling every kind of item with Obama’s likeness. She described one item showing Obama’s face on Malcolm X’s body. With her audience in an imaginative mindset, she asked everyone to imagine the famous photograph of President Lyndon Johnson meeting with King in the White House in December 1963 (below). Then, she asked her audience to imagine Obama’s face in that scene. Where does he belong in the photo? she asked.

The witty comment set the tone as Harris-Lacewell, associate professor of political science and African American studies at Princeton, helped her audience imagine new identities for Barack Obama — on the eve of his inauguration — and for Martin Luther King Jr. 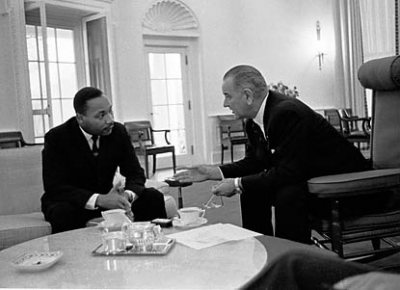 After a short pause, Harris-Lacewell asked her audience if anyone had placed Obama’s face on King rather than on the president of the United States. Nervous laughter indicated that some had seen Obama playing King’s role. Perfectly understandable, she said: “It’s hard to put black figures into new spaces,” such as the presidency.

With her audience collectively seeing Obama as president, she asked the morning’s key question: Now that Obama is president, who in our society is going to play the role of Martin Luther King? Answering her own question, she said, “All of us are Kings, because presidents need Kings.”

In being Kings to President Obama, said Harris-Lacewell, we must recognize Obama’s experience as a community organizer and his upbringing by grandparents of the Greatest Generation.

That cohort saw their relationship with government as reciprocal: the people would work for the good of society if the government promised to invest in the good of the people. “The Greatest Generation said, ‘We will sacrifice, but you will invest in us,'” she told the audience. It’s a covenant that Obama brings to the presidency, she said.

And by acting as Kings to President Obama, citizens can play the role of community organizers, helping government see that society’s problems are not always nails to be banged with hammers. “A community organizer can get in close enough to a problem to see that it’s really a screw that needs a screwdriver, not a hammer.”

By serving as Kings to Obama, citizens will help “make him accountable for upholding the full promise of the American dream.”

Martin Luther King Jr. also needed his own Kings, she said, people like behind-the-scenes activist Ella Baker. Or like Fannie Lou Hamer, who taught King that economic justice isn’t merely an urban issue but a worldwide poverty problem. Or like Bayard Rustin, who convinced King in the 1950s that he must embrace nonviolence fully, telling him, in Harris-Lacewell’s words, “you can’t ask the people to be nonviolent if you’ve got an armed guard at home.” And James Bevel, who urged King to oppose the Vietnam War more forcefully.

Not that it will be easy for citizens to serve as Obama’s Kings, she said. Citizens must be able to confront great problems even while understanding that failure is likely in their lifetimes. Nevertheless, society’s problems — of the sort exposed by Hurricane Katrina, around health care, housing, education, jobs, criminal justice, and civil rights — must still be tackled with great faith.

“If you cannot commit to a cause that will fail in your lifetime,” Harris-Lacewell said, “you will not create the tools we need to succeed.”

Help! From textbooks and course registration to the campus shuttle