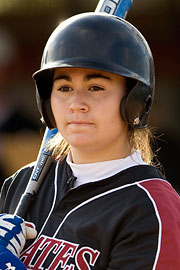 Berube was the only team member to hit above .200 for the week, and she did it at the most opportune time, as Bates defeated Colby last week to sweep the Mules for the first time since 2001, then went 2-1 in a weekend series against Bowdoin to claim the CBB title with an overall 5-1 record against the two in-state conference rivals.

Berube raised her batting average on the season to .275, and she ranks third on the team in slugging at .475. She also sports a spotless fielding percentage of 1.000 thus far.

Video: Youth is served, and this young softballer serves up the heat