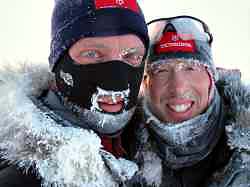 The final days were an “absolute blur,” said Huston in the final blog. “We pushed our bodies and minds to the limits to overcome seemingly insurmountable odds…. We are exhausted…. We have a fantastic feeling of satisfaction — and of freedom from our powerful routine that propelled us to the North Pole.”

Facing an April 25 deadline, Tyler Fish ’96 of Ely, Minn., and John Huston of Chicago are making a final dash to the North Pole.

Hoping to become the first Americans to ski unsupported — no food drops, no outside help — to the pole, the pair are less than 60 nautical miles away.

“We need to make it to the North Pole by [April 25] or we won’t make it,” Fish wrote in the expedition blog, part of the educational and fundraising outreach of the expedition.

“John and I…have been discussing, making plans and doing everything we have to do so we are ready for the final push, which we are now doing.”

Hampering their efforts is the steady drift, south and east, of the Arctic ice beneath their feet. They’ve also lost some time navigating the various “leads” of open water, and are feeling beat down by the harsh Arctic environment.

The April 25 deadline is more than self-imposed. Whether they reach the pole or not, Fish and Huston need to be on the last flight from Camp Borneo, a seasonal Russian station some 60 miles from the pole.

Facing the deadline, the pair have implemented a 27-hour schedule, traveling 17 hours each day and using the rest for sleeping and eating.

The trek began March 2 when the pair left Ellesmere Island and stepped onto the Arctic Ocean sea ice.