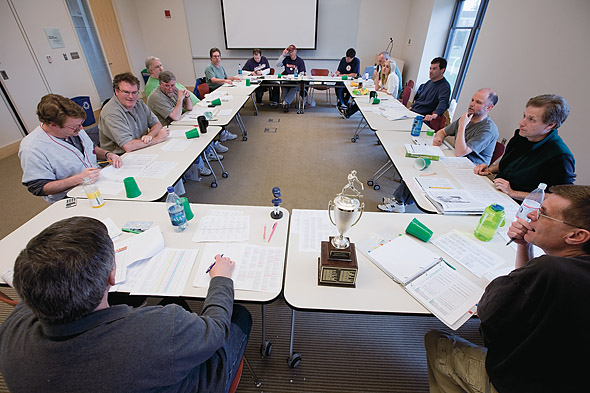 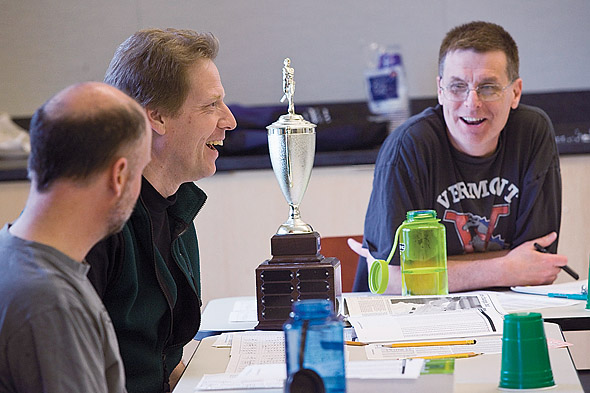 The Southern Maine Seacoast Rotisserie League, founded by Greg Pizzo ’82 in the mid-1980s, kicked off its 2010 baseball season with its player draft at Bates in New Commons.

Batesies dot the league’s ownership ranks. Besides Pizzo (league commissioner for life), owner of perennial contenders Pizzo Pies, you have Tom Campbell ’82 and Eric Leimbach ’83 of the Lewiston Lemmings, a nod to the alternative Bates mascot of the ’70s and early ’80s.

“The draft lasts about five hours,” explains Campbell. “It used to take 10 hours when beers were allowed.”

Brothers John and Neil Jamieson ’82 own the Jamieson Whiskeys, and Nick Kent ’82 runs the Kent Surgeon Generals. Other alums involved through the years have been Clark Spencer ’82 (Spencer’s Fencers) and Dave Linehan ’82.

“The draft lasts about five hours,” explains Campbell. “It used to take 10 hours when beers were allowed.” Suds or not, the bidding is high serious: One member flew in from Virginia for this year’s meeting.

The green cups in the photos indicate who’s still in the bidding for a player — a tipped-over cup means you’re out of that auction. “The cups live in my basement and have been in use for 15 years,” says Campbell.

Before the Internet, Pizzo would print out updated sets of statistics from his home computer and leave them on his deck in Cape Elizabeth for everyone to pick up. Now, the game’s all online — as is most of trash-talking between players — which means draft day is a great time for face-to-face camaraderie.

“I like the combination of statistics, baseball, and friendships,” says Campbell, a longtime math teacher at Waynflete School in Portland. — HJB