What is it about the ’60s that inspires students?

In April 1960, a group of Bates students picketed Woolworth’s in Lewiston in solidarity with black college students who had conducted sit-ins at segregated Woolworth lunch counters in Greensboro, N.C., and elsewhere in the South.

Bates picketer John Lawton ’60 told The Bates Student that informed action is an antidote to the “philosophy of drift.”

Those 1960 sit-ins helped spawn SNCC (the Student Nonviolent Coordinating Committee) while in the North, the group SDS (Students for a Democratic Society) began its activism around the same time. 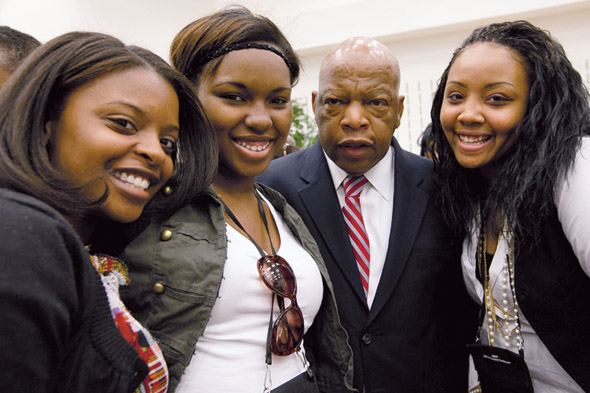 With Ashley Booker ’12 and Josalynne Cottery ’12, Alexandre Brutus saw a bit of ’60s glory in the flesh when they attended SNCC’s 50th anniversary celebration at Shaw University in Charlotte, N.C. Funded by the Bates Multicultural Center, the three students were selected to attend through a competitive essay process.

Alexandre Brutus went to the April event seeking clues to how she might mobilize her fellow students today. “I’ve had encounters with people who seem confident in their ignorance,” she says. “I need to be unafraid to speak out.”

She met Gina Belafonte, daughter of keynote speaker Harry Belafonte, and they talked about having courage to perform in the public arena. Belafonte asked, “What are you afraid of?” She then motioned to a nearby chair. “Stand on the chair and just talk. The only barrier to you is you.”

Ashley Booker, meanwhile, got a radical perspective from Willie Ricks during a session on Pan-Africanism and education. Ricks, who helped to coin the slogan “Black Power,” asked the young people attending, “Why are you begging your master for your education?”

While the SNCC event helped the three women begin to find their social-justice voices, two Bates seniors, Ariela Silberstein and Anthony Phillips, used their honors theses to give full voice to their ideas about the ’60s and activism.

Silberstein, of New York City, did her history thesis on the radical group Weather Underground. For his African American studies thesis, Phillips, of Philadelphia, looked at the opposing forces of integrationism and nationalism within SNCC.

Phillips has long been involved in social-justice issues in Philadelphia, and Silberstein, the child of parents who came of age in the ’60s, grew up in Greenwich Village. She recalls the moment she first saw the townhouse at 18 West 11th Street that exploded in 1970 when members of the Weather Underground accidentally detonated a bomb.

But importantly, each student went beyond their initial motivation, beyond media-generated stereotypes, and beyond secondhand academic commentaries, says their adviser, Associate Professor of History Hilmar Jensen. 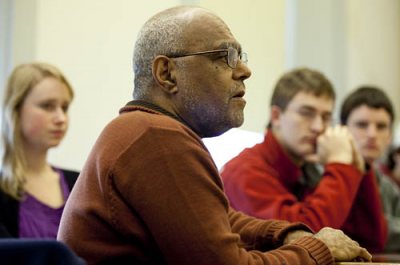 For example, Phillips sought out and interviewed civil rights leader Bob Moses during his Bates visit last year. Silberstein tracked down and interviewed former members of the Weather Underground.

In doing so, the two students deserve credit for “grappling with the historical roots of seemingly intractable contemporary problems, like ongoing wars of imperial overstretch and the deepening persistence of race and class inequality,” says Jensen, who also attended the SNCC 50th event.

Another SNCC attendee was Multifaith Chaplain Bill Blaine-Wallace. Like Jensen, Blaine-Wallace is keenly aware of Bates’ historic and contemporary reputation for helping to channel the social-justice impulse. He asks, “For students who have that fire in the belly” — whether it be John Lawton in 1960 or an Anthony Phillips today — “how can Bates create conduits to the real world?” — HJB