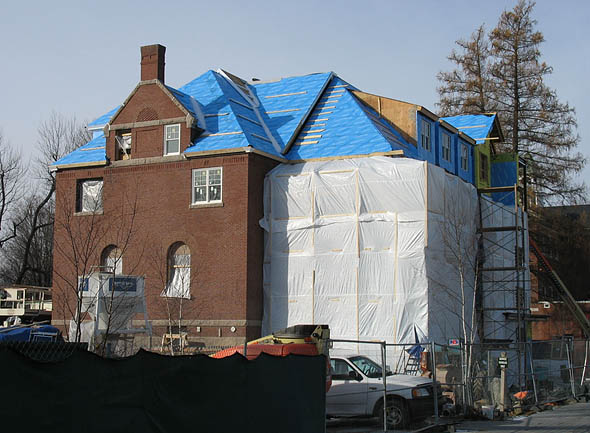 It isn’t the prettiest wrapping job you’ll see this time of year.

But when the plastic sheeting around the Hedge Hall addition does come off, probably in January, you can expect a fine present indeed: neat courses of brick and granite that masons are laying now.

The plastic, explains project manager Paul Farnsworth, retains the warmth that a propane space heater is pumping into the building. The mortar that sticks bricks together develops its strength from a chemical reaction, and that reaction doesn’t happen if the temperature drops below freezing. 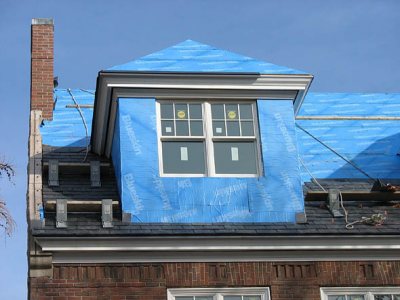 The workers are probably OK with the heat, too. There are two big heaters on the site, one feeding Hedge and the other Roger Williams Hall — that one has a plywood cover so workers won’t do damage when they toss down old roof slates. The heat is piped into the buildings from outside so the heaters won’t take up valuable floor space inside.

Another development at Hedge is taking place in plain sight, as roofers are laying the slates atop the other layers of roofing. Campus Construction Update, ever the connoisseur in construction matters, was pleased to see slate going on rather than asphalt shingles or the doubled-over trash bags that we use at home.

It was a simple matter of the price being right, says Farnsworth. “It was an alternate during bidding, and we could afford it. We’re all happy.” 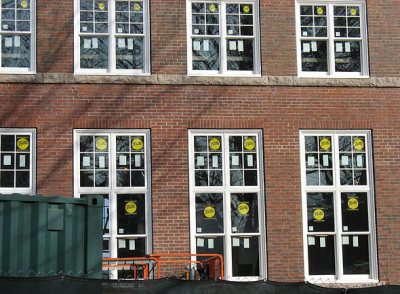 Taking place in pane sight is the window installation at Hedge. Aside from a few openings that will be left vacant to pass building materials through, that job should be done by the week of Dec. 6 with the placement of the large arched windows that are such a distinguishing feature of the building.

And inside Hedge, Farnsworth says, “things are happening fast.”

On the second story, floor sheathing is down, and “they’re going to town with wall studs. On the first floor, the sheathing should be finished by Dec. 4 and then they’ll start with those walls.” On the third floor, carpenters are putting up the wood that will hold up the ceiling, and then the floor and wall work can start. 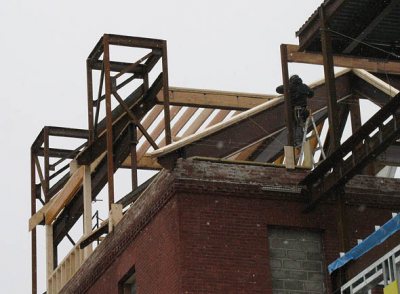 “Wherever they’ve framed the bathrooms out, the plumbers are right behind,” he adds. “They’ve put in all the carriers — the heavy cast-iron things that hold the fixtures in the wall. And the electricians have started to rough in outlets at the walls.”

The Hedge-Roger Williams project is approaching the greatest diversity of building trades at work, from carpenters to electricians to plumbers to roofers. Farnsworth estimates that, on the busiest days, there are 60 workers on the site.

Across the lot at Roger Bill, the focus is still the roof, as workers have begun attaching wooden rafters to that dramatic steel frame. Doing the rafters and sheathing them will take about four weeks if all goes well. Also on high, the slates are being stripped from the section of the old roof that was retained, on the Alumni Walk end of the building. 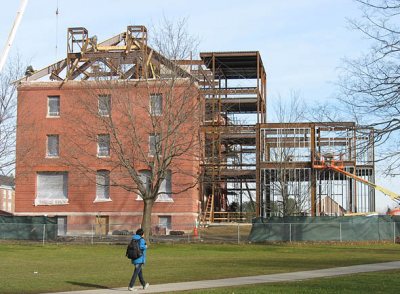 In the meantime, the nice shiny metal wall studs on the Bill’s addition will soon be hidden behind a layer of yellow exterior sheathing that’s going up now. That yellow material will then be concealed by a blue vapor barrier, which in turn will be covered with pink insulation. Pastelicious!

Also pending at the Bill is the rebuilding of the brick porch on the side facing Hedge — a project that Farnsworth has been dangling in front of Campus Construction Update for months, like doughnuts before Homer Simpson. A hallmark feature of the building, the porch had deteriorated past the point where mere repointing would put it right, and will be completely redone.

Finally, watch for a new electrical transformer to replace the unit next to the Bill. The replacement, leased from Central Maine Power, will feed both buildings. “At the same time, we’ll be pulling in the feeder cables,” Farnsworth says. “So, hopefully by the end of next week, we’ll be on the new electrical service.” 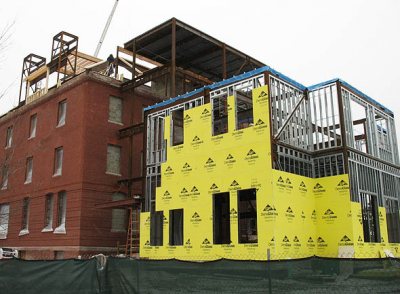