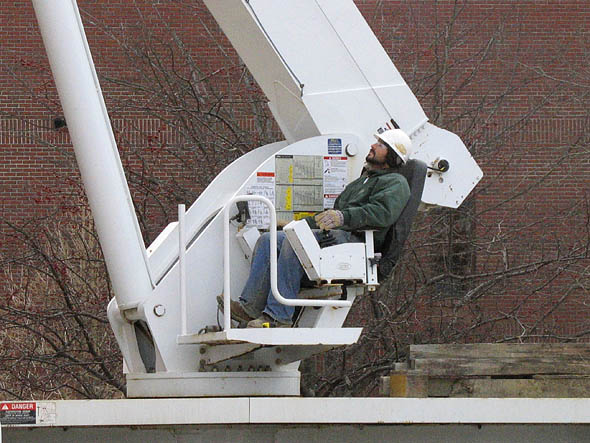 Construction workers in Hedge Hall got an early Christmas present Dec. 16 as the installation began of one of the permanent stairways.

After months of lugging themselves and their equipment up and down ladders and vertigo-inducing open-sided stairs, soon the workers will be able to change altitude in comfort and dignity. “It will make a huge difference,” says project manager Paul Farnsworth.

The stairs were installed near the building’s new main entrance at Alumni Walk. 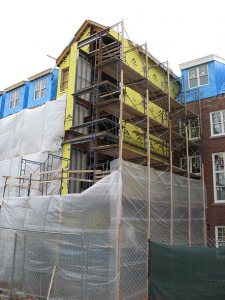 Another exciting development at Hedge that passers-by can’t really see, because it’s behind plastic, which is why you need Campus Construction Update in your life, is the progress on the masonry on the new addition. Masons working for R.C. Audette & Sons of Gray have reached the second floor with the brick veneer and contrasting granite bands, Farnsworth reports.

Once that masonry is done, probably by early January, installation of the glass wall on the stair tower facing Alumni Walk can begin. The masonry comes first so that the glass people can measure the finished openings. By the way, while we call it a glass wall, the technical term is “storefront,” Farnsworth explains.

Other workers are spraying insulation on the inside of Hedge’s original walls. It’s a 2-inch layer of essentially the same goo that you can buy in a can to plug up leaks around doors and windows.

“We have it in big tanks,” says Farnsworth, “but same idea.”

Asked about any protective gear the applicators wear, he replies, “it’s not hazardous, but it’s really sticky. If you get it on you it never comes off — your skin basically has to wear off. So they wear suits so the spray doesn’t stick to them.”

Finally in the realm of progress at Hedge that you can’t see, interior work is rollicking along. Electrical and plumbing infrastructure has been roughed in and inspected on the ground floor and drywall is being hung, with like procedures following on the upper floors. 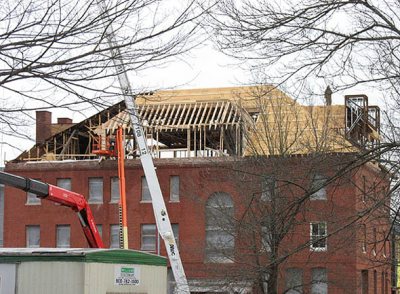 Across the construction site at Roger Williams Hall, the main action is still overhead, with workers continuing to frame and deck the roof. Or roofs, since there are, in effect, three of them: on the original building, the new stair tower aka storefront, and the addition linked to the tower.

The structure of that last roof looks dramatically different from the heavy lumber on the main building. It’s composed of shiny metal trusses, and installation has been done by the same firm that’s doing all the wall studs for both buildings, Roland’s Drywall of Sabattus.

Meanwhile, all the windows for the Bill are on site and installation will begin when the roofs are done. “We have 20-something guys working on the roof,” Farnsworth explains, “so as soon as the roof is almost done they’ll mobilize those guys to put in the windows.” 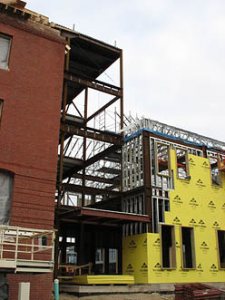 The lack of a watertight roof has restricted interior work at the Bill, but with roofing moving apace, that will change soon. Already “they are gearing up to start putting the subflooring down,” says Farnsworth. “They were going to start earlier, but we had the torrential rain Dec. 12, so we gave it a few days to dry out.”

That storm also produced high winds across the region, but caused no disruption of the Hedge-Bill project. “The only thing we sustained was a huge mud puddle Monday and Tuesday, but we smoothed it over and it froze up,” Farnsworth says.

“So long as it stays frozen over we’re in good condition. It was a couple inches deep.”