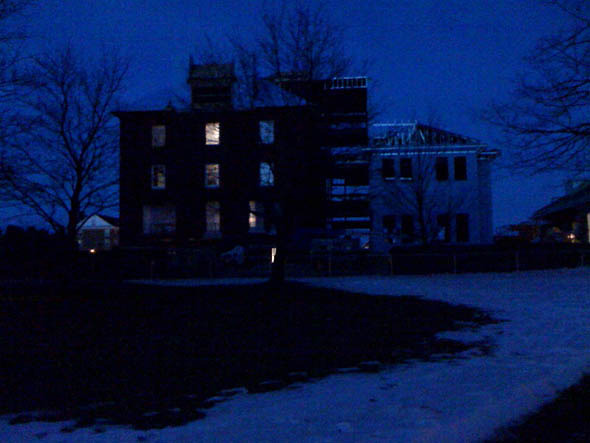 You can’t judge a book by the cover, as Willie Dixon wrote. But you can, as Campus Construction Update wrote (perhaps less memorably), judge the progress of a construction project by its outer surfaces.

At Hedge Hall, the heat-retaining plastic curtain around the new addition has been rolled back nearly to the main Alumni Walk entrance, revealing expanses of pristine new brick and granite trim that marry well with the older masonry.

The rest of the new Hedge brickwork should be exposed by mid-month, says project manager Paul Farnsworth. And by the end of January, the glass walls — aka “storefront” — of the stair tower will likely be in place.

Speaking of which, the concrete steps and landings for the addition’s staircases have been poured, “and on Tuesday morning we were walking up and down the stairs. It is so much easier” than the temporary stairs that had been in use, Farnsworth says. That temporary set will be moved over to Roger Williams Hall to give the workers a break from the ladders they’ve been climbing for months. 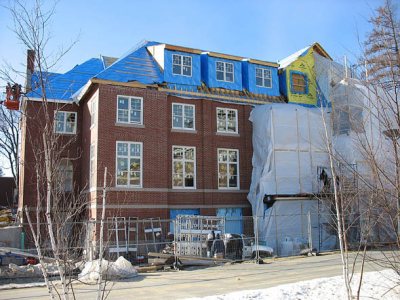 The new slate roofing has rounded the east end of Hedge, but a few things need to happen before it can be finished. For one, masons need to finish the addition walls before the roof that faced Alumni Walk can be completed. Then, to fit complex rooflines where the building’s distinctive old turret meets flat planes, special trim is needed that hasn’t shown up yet.

Still speaking superficially, you can see the snazziest new feature at Hedge if you hike down the service road alongside Ladd Library. Check out the dormers: They have been covered with “pre-weathered” copper whose severe charcoal gray will, over time, modulate to the familiar blue-green copper patina called verdigris.

Made by Revere Copper Products and called ContinentalBronze (although it’s not actually bronze), the material is being installed by the local roofing firm Hahnel Bros. “It’s a new product,” Farnsworth says. Because Bates is one of the first users, “they gave us a discount.”

The material’s artificially induced patina is equivalent to about a year of natural weathering. Farnsworth adds, “When you bend it, you expose the raw copper beneath the patina, so the bends make a neat pattern.” As the manufacturer writes, “ContinentalBronze will not appear as a uniform, monochromatic surface, but rather ‘alive’ and vivid with variations of shade and hue.” 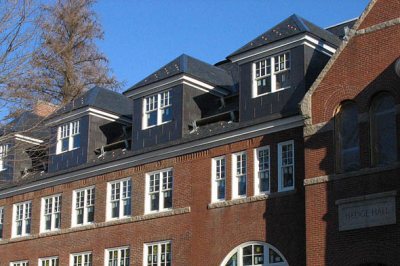 Inside Hedge, the work of turning space into rooms continues. On the second floor, the wall studs are all in, drywall is being hung and the wiring has passed inspection. Studs are being installed on the third floor, as well as the first floor, where that work was postponed so the wall workers could go up to the attic to create spaces for blown-in insulation.

Over at Roger Williams Hall, interior work is largely confined to laying subflooring. Most of the action remains, as it has for months, outside. Aiming to treat the Bill just as superficially as we have Hedge, we ask Farnsworth about the Blueskin weather barrier that’s been applied, with dazzling effect, on the addition and roof. Specifically, how do they put it up?

He likens the process to using contact cement, where you coat both surfaces with goo and then press them together. The Blueskin has a sticky — very, very, very sticky — coating that’s exposed when a protective backing is peeled off just prior to application. At the same time, glue is rolled onto the surface to be covered. Then workers wrangle the Blueskin into place.

“It takes a few guys to do this,” Farnsworth notes. 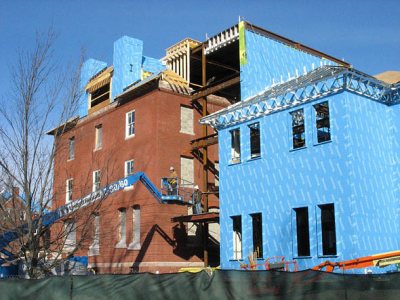 Coming to the addition next, in a process now familiar from Hedge Hall, will be a layer of pink insulation, and then a temporary plastic envelope to hold in the heat while masons lay brick and granite. That work is scheduled to start by the third week of January. And window installation is moving apace on the addition, as well as on the old section of the Bill.

Up on the roof, as Gerry Goffin and Carole King wrote, virtually everything is enclosed, an exception being the end overlooking Alumni Walk (coincidentally, the one section of the previous roof that was retained). Here brickwork at the top of the wall needed repair, Farnsworth explains. 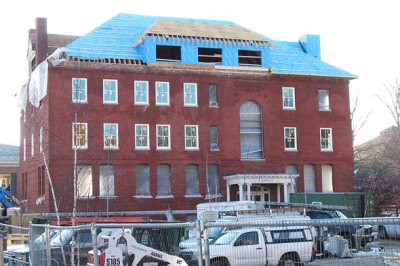 “We had to peel back part of the roof in order to repair it,” he says. Which just goes to show that sometimes you do need to look beneath the surface of things.