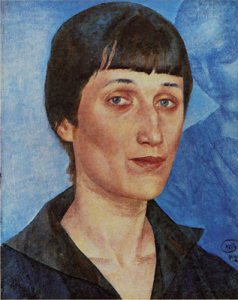 The two students of Russian began their Mount David Summit panel presentation with a black-and-white photograph showing the open casket of Russian poet Anna Akhmatova surrounded by mourners, including a visibly distraught Joseph Brodsky, a poet she had famously mentored.

In one of the 2011 summit’s many panel presentations, Nora Murray ’12 and Andrew Wilcox ’11 drew on powerful works by the two acclaimed Russian poets to explain the “Sights, Sounds and Sense of Russian Poetry.”

The session, held in a Pettengill Hall classroom filled with fellow students, faculty, staff and friends, was moderated by Associate Professor of Russian Dennis Browne.

Eeach read poems in the original Russian, showing how the sounds of a language — whether spoken or heard simply within one’s head while reading — contribute to the poem’s impact.

Murray pointed out, for instance, how the long pronunciation of the letter “o,” repeated throughout the Russian version of Akhmatova’s “The Last Toast,” strongly reinforces the mordant feeling of this meditation on the dissolution of one of Akhmatova’s three marriages. 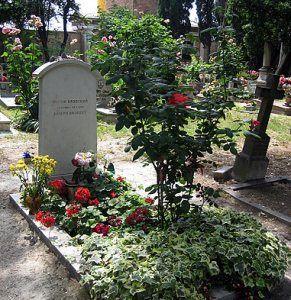 Both discussed, during the presentation and in response to questions afterward, the challenges and joys of translation, pointing out how much of the result depends on the intention as well as the skill of the translator.

While some translators aim to render a virtually literal, word-for-word representation in another language, even if that sacrifices some of the meaning, others seek to virtually create a new work that is their own as much as the original writer’s, a fact that prompted Wilcox to note that Brodsky tightly controlled translations of his poetry when he was alive.