The Seattle Times catches up with noted chef and restaurateur Robin Leventhal ’88, the new chef at Stopsky’s Delicatessen. 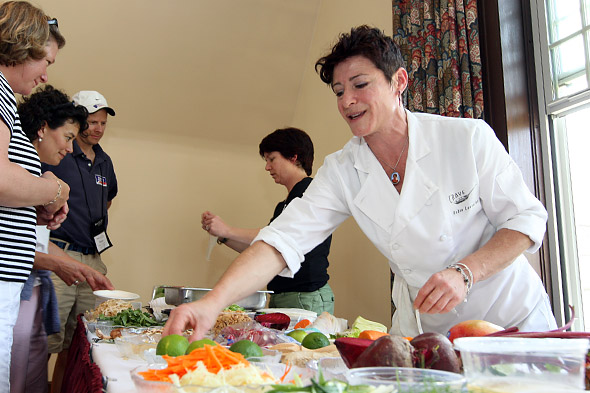 Food writer Nancy Leson writes, “You never know what stage Robin Leventhal is going to star on next. One minute she’s running her own show at Crave, the tiny bistro that made it big during its five-year tenure on Capitol Hill. Next she’s in Vegas, as a celebrity cheftestant on Top Chef‘s” sixth season. Today she’s top chef at Stopsky’s Delicatessen, a 36-seat restaurant and take-out shop on Mercer Island, built as a modern Jewish deli with a Pacific Northwest twist.”

There’s buzz about the restaurant, and Leventhal was recently the focus of a Salon “Scavenger” column by Felisa Rogers that explains “How to make the perfect recession martini.”

Answering the Times’ question of what will diners find at the new eatery, which opens in May, Leventhal says she’ll draw “inspiration from Sephardic culture and Spanish cuisine” to present, among other dishes, “escabeche salmon, my take on kippered salmon. And we want to revisit kasha varnishkes, so I’m using black barley instead of buckwheat and making the pasta for the bow-ties. We’ll be making our own pickles, too.”

“I’ll be fighting for the rest of my life.”

By the way, 10 percent of all retail pickle sales will go to the Fred Hutchinson Cancer Research Center, reflecting Leventhal’s life work helping raise funds to find a cure for lymphoma.

“It’s been seven years since my diagnosis,” she says. “My Hodgkins is in remission, and my non-Hodgkins is something I’ll be fighting for the rest of my life.” View story from The Seattle Times, April 27, 2011.

‘Being told I couldn’t’: Inspiring stories from Bates female athletes