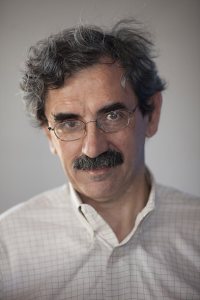 Promoted to full professor in May 2011, Baltasar Fra-Molinero is a professor of Spanish whose research interests include the Spanish Golden Age and Spanish-American colonial literature. He focuses on the representation of blacks and their diaspora and is the author of the book La imagen de los negros en el teatro del Siglo de Oro (“The image of the black in the theater of the Golden Age”; Siglo XXI, 1995).

Fra-Molinero chairs the Spanish program at Bates. In addition to all levels of Spanish language, he has taught Spanish theater, Cervantes’ Don Quixote, medieval Spain, Latin American and Spanish cinema, and the Afro-Hispanic diaspora.

Now in his 17th year at Bates, Fra-Molinero received his doctorate in Spanish and a master’s in linguistics from Indiana University. He holds a doctorate and bachelor’s degree in English philology from the University of Seville in Spain.

In collaboration with Bates professor Sue E. Houchins, he is producing a critical edition and translation of the 18th-century Compendio de la vida ejemplar de la Venerable Madre Sor Teresa Juliana de Santo Domingo (“Compendium of the Exemplary Life of the Venerable Mother, Sister Teresa Juliana of Santo Domingo”). He co-edited a monographic issue on Equatorial Guinea for Afro-Hispanic Review (2009) and was guest editor of a volume on Don Quixote and Race for Annals of Scholarship (2010).