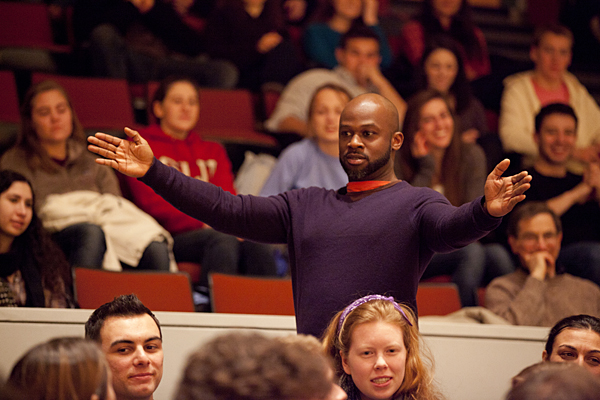 Marc Bamuthi Joseph engages with his audience in the aisles of the Olin Arts Center Concert Hall. (Photographs by Phyllis Graber Jensen)

“This place is really fancy,” said Joseph, jumping off the stage into the audience. “I believe in ‘not fancy.’ ”

The piece is usually performed on a circular stage, with large “houses” on wheels representing different American cities. His Bates reading performance included two of the four acts, Chicago and Oakland. (The Bates Dance Festival presents the full-blown production April 27-28.)

Joseph called upon the Bates audience to fulfill the roles usually performed by the other artists working on the project. For one poem, the audience was split into four sections, each with a verse of “I’ve Got Peace like a River.” Without breaking cadence, Joseph would conduct the audience in singing while he moved around the room telling the story of a woman who emigrated to the U.S. from Sudan to escape the violence there, only to have her son murdered in Chicago.

Along with the excerpts from rbGb, Joseph offered original poems from previous projects. In tribute to King Day, he began with a piece dedicated to the civil rights leader. Using quotes from some of King’s greatest speeches, Joseph asked how far America has come in realizing King’s “dream.”

When an audience member asked Joseph how he came to be a performer, he answered with a rap from the album that, he says, changed his life, It Takes a Nation of Millions to Hold Us Back by Public Enemy. “Chuck D gave me a whole new vocabulary for liberation,” said Joseph.

But his last piece of the evening, a story from his time in Senegal, also shed some light on his emergence as a performer. After realizing his vulnerability to street hustlers and theft, Joseph encounters an American woman who is fighting the traditional practice of genital mutilation.

While visiting one village, that friend asks him to distract an impromptu village dance party while she negotiates an end to genital mutilation with the village elders. As a poet, Joseph is unsure how to “distract” a crowd of dancing locals. On a whim, he breaks into the hip hop dances he learned growing up in New York City–and the village is won over, as was the Bates audience by his re-enactment. 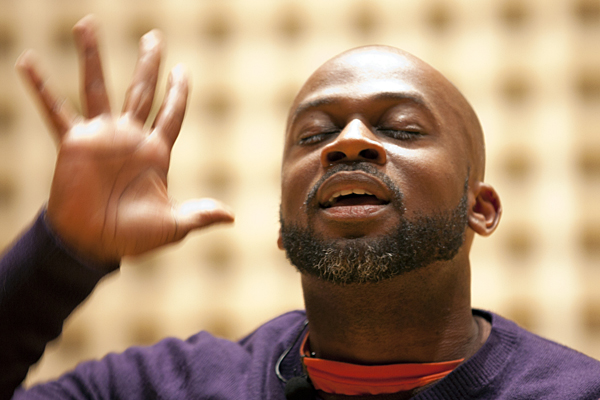 Joseph performs on the Olin stage.

Joseph worked his magic in a more intimate setting the evening prior to the Olin performance. While plows cleared the streets after the winter semester’s first snowstorm, Bates students congregated in the student-run coffee house, the Ronj, to enjoy an evening of hot chai, music and poetry from Joseph and student performers.

Sponsored by the Arts House, the evening was a successful turnout of student talent.

It was one of several opportunities for students to interact with Joseph, who also visited anthropology, dance, environmental studies and rhetoric classes during his four-day visit.

Standing in the middle of the room rather than onstage, Joseph performed two energetic spoken-word pieces that combined dance with storytelling and role-playing to captivate the room.

Eleven students representing all class years read original poems. Although some seemed nervous, the room was supportive and everyone got a hand. Many students admitted it was their first time reading in front of their peers.

“All of the student readers and performers were incredibly talented,” said Emma Timbers ’14, a creative writing major who co-organized the event with fellow Art House representative Doug Welsh ’14. “And it was exciting to see so many freshmen sharing their work.”

For some, reading has been an important aspect of their time at Bates. Seniors Charlotte Simpson and Alana Folsom, both members of the Bates Authors Guild, read from their creative writing theses. About half of the readers performed original slam poems and invited the audience to join their new slam group.