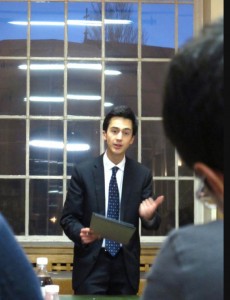 Ian Mahmud ’12 supports the government position during the quarterfinals at Cambrige in November. The motion: “This House believes that the use of conscripted soldiers should be a war crime.”

What was true 90 years ago, when The New York Timesproclaimed Bates to be a “power centre of college debating,” is in evidence again now as the college’s Brooks Quimby Debate Council ranks among the best debate programs in the world.

Ranked 14th globally as of Feb. 29 by the International Debate Education Association, the Bates team recently has ranked as high as ninth.

Bates’ strong world ranking, says Director of Debate Jan Hovden, “is a true honor for members of the Brooks Quimby Debate Council. Bates is an undergraduate-only institution whose students regularly compete against graduate and law students from around the globe, so the ranking speaks volumes about the quality of students we have at Bates.”

According to the IDEA website, the world rankings draw “from the results of 33 high-profile tournaments across the world to show an accurate representation of the comparative strength of debating societies against each other.”

In rankings published by the American Parliamentary Debate Association, Bates is ranked sixth the U.S., behind Yale, Brandeis, Harvard, American and Columbia universities.

Bates debates at home March 8-10, hosting a public debate vs. Yale at 7:30 p.m., March 8, in the Chapel, and an intercollegiate debate the following two days. 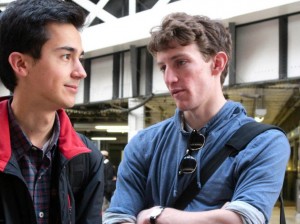 Ian Mahmud ’12 and Colin Etnire ’12, ranked among the top U.S. debate teams, chat during their November debate trip to Cambridge.

Pacing the Brooks Quimby Debate Council are seniors Colin Etnire of San Francisco and Ian Mahmud of Duxbury, Mass., ranked seventh in the U.S.in the Team of the Year standings by the American Parliamentary Debate Association.

The Brooks Quimby Debate Council is distinctive in that the club trains and develops debaters who have had no prior experience. It does not hold competitive tryouts but is open to all interested students.

Neither naive nor cynical, Oscar winner Stacey Kabat ’85 reflects on her domestic-violence activism