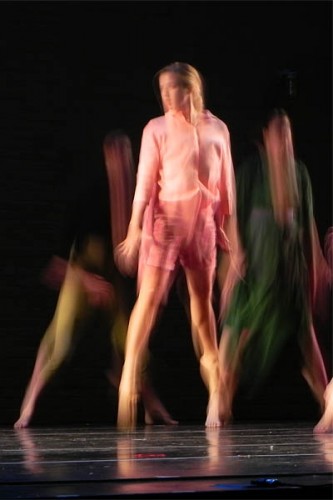 Choreography by the director of the Bates College dance program and by three of the program’s first graduating dance majors is featured in the 2012 Winter Dance Concert.

Performances are held in Schaeffer Theatre, 305 College St. A ticket to either Program A or B is also good for admission to the other program.

Admission is $6 for the general public and $3 for students and seniors. Tickets are available at batestickets.com.

Program B consists of choreography by 10 students in a dance composition course — students in all four class years whose majors range from physics to dance. All told, the two programs and four performances will feature more than 50 Bates students.

“The choreographers in Carol’s composition class and my advanced composition class work on their dances for much of the semester,” says Visiting Assistant Professor of Dance Rachel Boggia. “The pieces go through many drafts and are very strong by the time they are performed.

“It’s wonderful to see the choreographers’ visions come to life with the help of their peers, as well as our design faculty and staff.”

Dance majors Lowe and Christianson have taken the challenges of the creative process to a new level in their thesis works. “My piece explores us/them dichotomies, the problems with colorblind ideology and the beauty of difference within the context of monster theory,” said Christianson, a double major in dance and rhetoric from Madison, Wis.

“This process has been much different from anything I’ve done before because I’m using improvisational scores more than set choreographed phrases. I’ve learned to let go a bit and allow collaboration with my talented dancers to make my piece much richer than if I had choreographed every single movement.”

“To sketch out an idea in one’s mind and then try to translate it to one’s body, clearly enough that a whole bunch of people with very different bodies can paint the picture you sketched out, can be daunting,” says Lowe, of New York City, a double major in dance and American cultural studies. “Sometimes ideas get lost in translation. This was where my process lay and where I found my piece.”

“Dance is the point defined by the meeting of the intellectual mind and the intellectual body,” she adds. “It embodies the culturally and socially lived experience both literally and figuratively, allowing us to challenge core ideas rooted in our society such as race, gender and sexuality.” 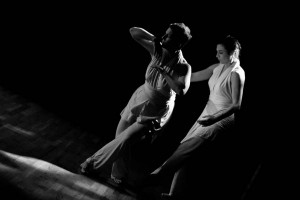 Carol Dilley and Rachel Boggia, both of the Bates dance faculty, perform "Phantom Ice" during the first performance of the New York Bates Alumni Dance Concert, on Feb. 24, 2012. Photograph copyright © 2012 by Ebbe Sweet '11.

Dilley’s works grew from her long interest in collaborating with Shapiro, an innovative cellist who teaches, performs solo recitals and works with ensembles concentrating on contemporary music.

“My efforts to get on stage with Madeline have culminated in two semester-long choreographic endeavors for this concert,” says Dilley, associate professor of dance.

She and Boggia will perform “Phantom Ice,” for which Dilley commissioned faculty composer Bill Matthews, Alice Esty Swanson Professor of Music, to write the score that Shapiro will play. “Phantom Ice” was premiered at a Bates dance alumni concert in New York City in February. Dilley’s choreography for 13 students, called “Wetlands,” is set to a piece from Shapiro’s repertory.

Bates established a major in dance, the first at a Maine college devoted solely to dance, in 2011. The Friday and Sunday programs include work by three of the inaugural class of four Bates dance majors who will graduate in May. The third, in addition to Lowe and Christianson, is Yasin Fairley, of Newark, N.J. The fourth major, Kristen Gavin of Lewiston, performed her senior thesis composition last fall, as did Fairley, who offers a new work this time around.