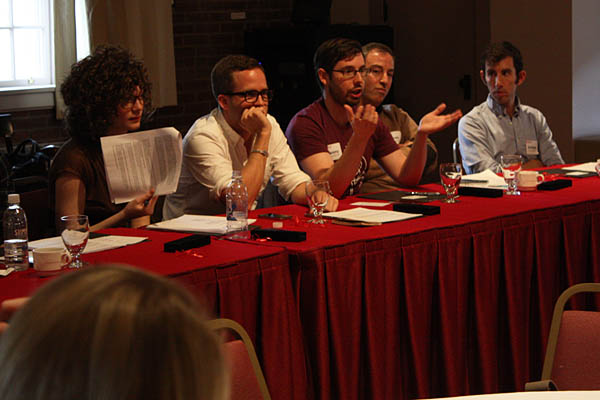 “Optimize opportunities for serendipity. Have a bias towards saying yes.”

These aren’t words from the latest self-help best-seller, but instead the jubilant advice Jeremy Fisher ’06 gave an eager crowd of 53 Batesies sitting around white-clothed tables on the second floor of the Muskie Archives.

On Saturday, March 31, campus got a visit from Fisher and the Mafia — the Bates Creative Mafia (BCM) that is. This group of alums working in creative fields collaborated with the Bates Career Development Center (BCDC) to host a daylong workshop, The Creative Economy and How to Grease It, designed to explore career directions in industries like marketing, communications and publishing.

A daylong affair, the workshop was lively and engrossing, as smartly dressed presenters and attendees engaged in conversation that was animated and at times cheeky. Positive and productive energy pulsed through the room, especially during the Dining Services-catered working lunch that opened up time for socializing.

An affiliation of about 60 members, the BCM brings together New York City-based alumni for networking and professional development opportunities. Monthly meetings include member presentations; past topics have included “An Introduction to Introductions” by Fisher, as well as event planning for the on-campus workshop.

For the March event, the BCM organized a panel of nine Batesies working across the creative economy to share real-life insights, experiences and the kind of advice they would have liked to get before leaving Bates.

Starting with presentations about their personal experiences, the panelists offered playful stories of transitions, self-actualization, community and their own projects.

Andrew Karp ’09 is an account manager at the award-winning international advertising firm Cunning. Describing his post-graduation transition, Karp talked about moving into his first New York City apartment and “feeling like I wasn’t a college kid anymore.” 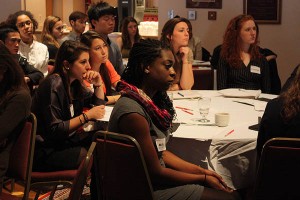 Participants listen intently during a presentation by the Bates Creative Mafia on March 31, 2012. Photograph by Simone Schriger ’14.

Karp prescribed keeping up a constant do-something attitude while trying to get established after graduation. “Don’t hesitate to produce something,” he counseled. “It’s important to have things going on outside work that you’re passionate about.”

Carola Cassaro ’09, a product designer at the New York design firm Method, recounted how she bounced from job to job after Bates — and how it worked out fine. “It’s OK to try things out and keep puzzling,” she assured the audience.

In fact, that was a theme for the day, as the alumni promised students that they won’t have to figure everything out the minute they graduate. “It’s liberating to discover you don’t have to decide . . .ever,” exclaimed Peter Pawlick ’05, a colleague of Karp’s at Cunning.

“It’s not a straight path,” explained Anna Stockwell ’08, an editor at the prestigious lifestyle magazine Saveur. “It’s about really being active, sending resumes and being involved in your community.”

After Bates, convinced she wanted to be a photographer, Stockwell interned at several photography and fashion magazines. But she found herself constantly dreaming about food, perusing cooking blogs and planning recipes during the work day. So she switched course, started her own blog, took a food-writing course and began interning at Saveur.

Eight months later she was hired as a full-time assistant editor.

Throughout the day the BCM members emphasized the power of community and connecting. Fisher, CEO of the Web-based social sharing platform Wander, underscored the importance of getting out and meeting people. Stockwell, who found each of her internships through Bates connections, has in turn had the chance to hire four Bates alumni for projects at Saveur.

It was a jam-packed day. The inspiring morning session gave way to afternoon workshops where the attendees broke into small groups and explored self-actualization, community and how “to do something.” Easing into the spirit of collaboration, they speculated about projects they could work on together.

Participant Claire Lampen ’12 found it helpful, she said, “to see alums who have recently graduated and gone through this process, and who we kind of know and can definitely relate to.”

The presenters emphatically reassured participants about the career value of the Bates education. “Everything you are studying is relevant to everything,” Pawlick said. “It’s so much more helpful to what we do, grappling with complex cultural and communication problems, if you can do research and solve problems.

“We can teach technical skills, but we can’t teach critical thinking.”