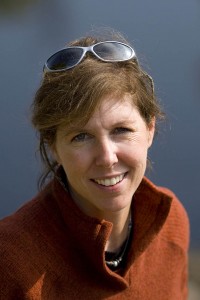 “Desperate Alewives,” a Maine Public Broadcasting Network documentary featuring Bates environmental economist Lynne Lewis among others, has been nominated for a New England Emmy in the category of Outstanding Environmental Program. The program is part of the MPBN series Sustainable Maine.

A river herring called the alewife — aka sawbelly, mooneye, gaspereau and big-eyed or spring herring — is an essential component in the fresh- and saltwater food chain along much of the Eastern Seaboard. In Maine, alewife populations have plummeted, prompting research by a group whose members include scholars from Bates, Bowdoin College and the University of Southern Maine, many of whom are featured in the MPBN segment.

Lewis, Elmer W. Campbell ’27 Professor of Economics at Bates, joins the discussion of how restoring just this one fish species could play a huge role in rejuvenating a river’s food web. In the process, she and her interdisciplinary team of researchers and fisheries experts answer the always-important question: Why does river rehabilitation matter?

“I think if we don’t care, it’ll be too late,” Lewis says. “Policymakers always want to know the costs and benefits — and the costs of these decisions always tend to be very localized, the politics very intense, about taking out a dam or putting in a fish ladder.

“But the benefits accrue to so many different people: to the anglers, to the property owners, to the codfishery, to the lobster fishery.” 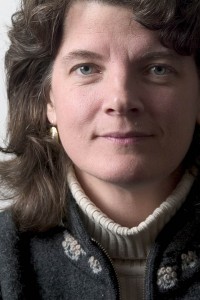 Lewis and her Bates colleague Beverly Johnson, a geology professor depicted in the documentary, are collaborating with faculty from Bowdoin and USM on the project “Maine Rivers, Estuaries and Coastal Fisheries,” funded by the National Science Foundation’s Office of Experimental Programs to Stimulate Competitive Research (ESPCoR) through a grant to the University of Maine’s Sustainability Solutions Initiative.

That initiative is designed to connect research with concrete action that promotes the economy, vibrant communities and healthy ecosystems in and beyond Maine.

Funded by the National Science Foundation, the collaboration will weigh the costs and benefits of river rehabilitation in Maine and the effects of rehabilitation efforts on fisheries and economies.

Johnson’s research seeks to reconstruct the Gulf of Maine’s ancient nearshore ecosystem in order to help scientists predict current responses to natural and human influences. Funded by a $393,000 NSF grant, that interdisciplinary project also includes biologist Will Ambrose and archeologist Bruce Bourque of Bates and Robert Steneck of UMaine’s School of Marine Sciences.