Fast-changing technological and economic relationships “are changing the place of America in the world, and of higher education in America,” the next Bates president told alumni gathered for Reunion 2012. And in the face of that challenge, Clayton Spencer wondered, how should Bates respond? 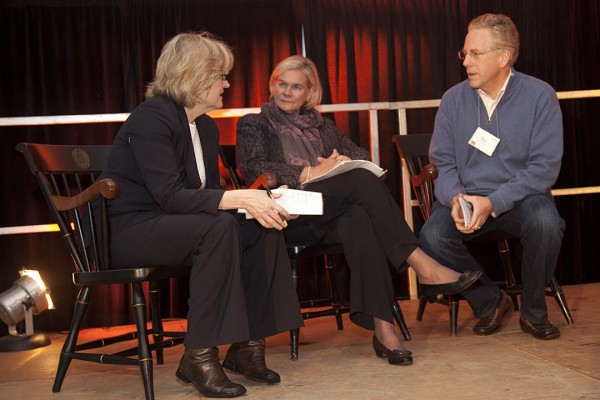 “It’s not enough simply to circle the wagons and insist that small is better, or that nothing can replace the human factor in education,” Spencer told enthusiastic listeners on the Friday evening of Reunion, June 8.

“How do we think about Bates and places like Bates in the context of this challenging world?” she asked. “How do we make a case that we’re still important, that it’s still worth it to come to Bates, that the education you got here is still worth something?”

Sharing the podium with interim President Nancy Cable at an event launching Reunion Weekend, Spencer was candid in her views about the world for which Bates is educating students, as well as the strengths and the needs the college brings to that work. 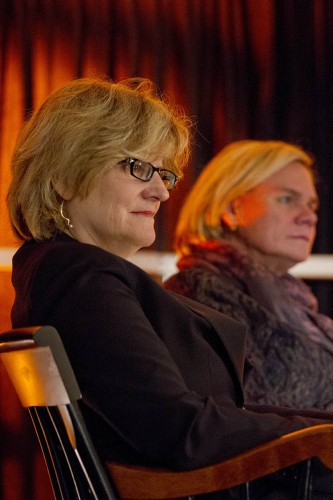 Culminating in a standing ovation, the alumni welcome was warm for the leader who will take office July 1. The “standing O” was preceded by whoops of enthusiasm about points she made and appreciative laughter at Spencer’s humor.

Cable looked back at a year that was anything but a placeholder between “real” presidents: a year marked by the implementation of a dance major, the opening of the renovated Hedge and Roger Williams halls, the emergence of a reinvigorated Bates Career Development Center, and an excellent run in athletics.

But if Cable offered the year in review, Spencer looked ahead to the future of Bates in an address shot through with optimism, offering two initial recommendations.

Two keys to the future 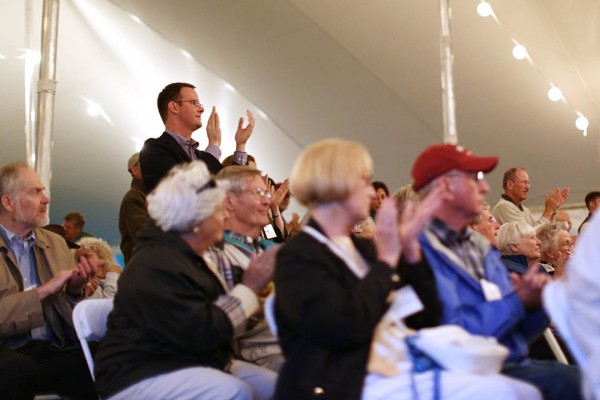 At the conclusion of the Reunion Address, alumni begin to rise for a standing ovation. Photograph by H. Lincoln Benedict '09.

That solid foundation comprises Bates’ founding values, its location and its reputation. In a world that, more than ever, demands that liberal arts colleges justify the investment that families and society make in them, these qualities — in particular, Bates’ bedrock egalitarianism — confer institutional significance and distinctiveness.

Bates, she said, practices “not a vague kind of politically correct inclusiveness, but instead the inclusiveness that says, we are here to encounter each other as humans with potential, with gifts; and the greatest opportunity that anybody can have as a human is the opportunity to realize those gifts.

“That’s in the fabric of who we are.”

She added, “We have been ahead of our time since 1855. And that puts us in a great position to look at a world that is changing very fast.”

Spencer drew especially warm applause as she cited Maine and Lewiston as advantages to Bates. “There is no place that I would rather find myself than in Maine, which embodies ruggedness and self-sufficiency, the elemental and the substantial,” she explained.

“And that includes Lewiston,” which she described as a fascinating community “that gives our students amazing opportunities to interact with the complicated world around them on a very granular level.” 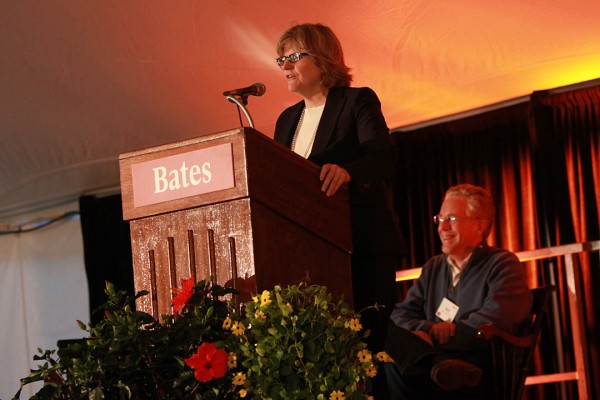 Spencer said that "the fact that our rigor and our tough-mindedness are encompassed within a community that is kind and respectful is a phenomenal strength." Photograph by H. Lincoln Benedict '09.

The third factor in establishing particularity, she said, is an outstanding reputation — which Bates has. But the college must also address the fact that “our reputational capital far exceeds our financial capital.” That’s a serious problem for a college whose educational quality, “with the kind of personal attention at every level that we give, is expensive. It is not going to get fundamentally cheaper in our lifetimes.”

For her second overall prescription, Spencer told the Reunion gathering that “we need to make a virtue of our scale.”

Smallness enables Bates to educate each student “in a community…that takes as its project the development of the whole person, and situates the search for knowledge in a framework of values. This is something I think Bates does incredibly well.”

“There are many parts of this world where respect for other human beings is low, where kindness is really undervalued,” Spencer said.

“I think kindness is not to be underestimated. The fact that our rigor and our tough-mindedness are encompassed within a community that is kind and respectful is a phenomenal strength.”

Pursuing the theme of Bates progressiveness, Spencer also reminded her listeners that Bates is ahead of the game in both interdisciplinarity and in robust engagement.

Students go out into the community and the world, she said, and “they learn. They bring that back into the classroom, and they go out again with an intellectual framework taken from the classroom. It’s a virtuous cycle,” and “we are ahead of the game in recognizing that.”

“We need to be porous to the world, we need to be intentional about what we’re doing here and we need to make sure our students go out and get the broadest possible experiences they can,” Spencer concluded.

“Our graduates need to be global participants in a highly competitive world, and it’s our job to make sure that we prepare them for this reality.”

What emancipation meant to Benjamin Mays, and what it means now