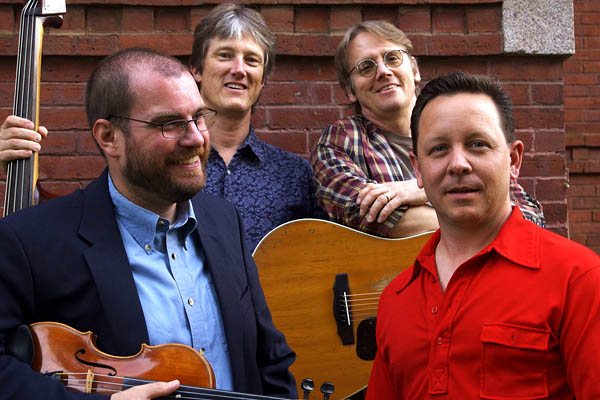 Presenting favorite sounds from near and far, the Midsummer Lakeside Concert Series at Bates College continues with Boréal Tordu at 6 p.m. Thursday, July 19, in the Florence Keigwin Amphitheater at the college’s Lake Andrews.

An upbeat quartet with a mission to keep the music of their Acadian heritage alive, Boréal Tordu uses spoons, horseshoes and feet to keep the beat. (Roughly translated, the band’s name means “northern twist.”)

The group began when fiddler-accordionist Steve Muise and singer-Dobro player Robert Sylvain realized their mutual interest in the musical traditions of the Acadians, the Québecois and the French-speaking peoples of the Republic of Madawaska and New England’s mill towns.

Guitarist Pip Walter, a familiar presence on the Portland scene, and bassist Andy Buckland round out the band. Thrice nominated for the Portland Phoenix Reader’s Poll award for Best World Music Act, Boréal Tordu performs throughout the Northeast and Canada.

The series will continue with three more concerts, all at 6 p.m. Thursdays. Sponsored by the Bingham Betterment Fund, the Garcelon Society and Bates’ Information and Library Services division, these family concerts are open to the public at no cost. Listeners are encouraged to bring a picnic and lawn chairs or blankets.