In wake of Gomes Chapel naming, panel to discuss ‘intersecting identities’ of the Rev. Gomes 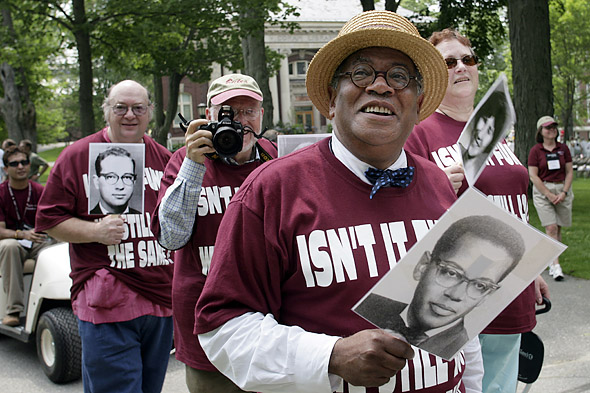 The Rev. Peter Gomes ’65 is shown with members of his class during the Reunion parade in 2005. Photograph by Phyllis Graber Jensen/Bates College.

The discussion follows the Oct. 25 naming of the college’s century-old chapel after Gomes, a member of the Bates class of 1965 who served Harvard University as Plummer Professor of Christian Morals and Pusey Minister in The Memorial Church. Gomes, a beloved member of the Bates community and a nationally influential preacher, died in February 2011.

The Gomes events are part of the celebration of the Oct. 26 inauguration of A. Clayton Spencer as Bates’ eighth president. The Saturday panel is open to the public at no cost. Lunch will be served. No reservations are required.

The panel is sponsored by the Bates Alumni Council, the alumni organization Bates PRIDE, the Multifaith Chaplaincy and the Office of Intercultural Education, as well as the student organizations OutFront, which provides a forum for LGBT issues, and Amandla!, which promotes better understanding of the many communities of the African diaspora.

Considered one of America’s most distinguished preachers by the 1970s (Time Magazine singled him out as one of “seven star preachers” in December 1979), Gomes became a prominent spiritual voice against intolerance after he announced in 1991 that he was gay.

“I now have an unambiguous vocation — a mission — to address the religious causes and roots of homophobia,” he told The Washington Post months later. “I will devote the rest of my life to addressing the ‘religious case’ against gays.”

Pursuit of that mission would include publication of the nationally best-selling books “The Good Book: Reading the Bible with Heart and Mind” and “Sermons: Biblical Wisdom for Daily Living in 2002,” even as Gomes’ writing and scholarship continued to extend into wider areas, noted The New York Times, such as early American religions, Elizabethan Puritanism, church music and the African-American experience.

In a 1987 profile in Bates Magazine, Gomes said that that his famous embrace of tradition, ritual and history reflected his belief that the Christian church is most alive when it is passing enduring “ideals and ideas” from one generation to the next.

“What I’m interested in are those truths, values and commitments that make people respond to the ultimate hopes, ultimate goods,” he said.

In turn, Gomes added, the human battle between justice and oppression cannot be measured in our own moment. “If we did everything for our own time and our own generation, and expected to see results, nothing of worth would get done,” he said. “That’s why I’m in it for the long haul.”

A former Bates trustee who served on the board for more than two decades, Gomes received the Benjamin E. Mays Medal from the Bates Alumni Association in 1998 and delivered the college’s Sesquicentennial address in 2005.