Everything had to go. The stuffed bobcat and the stuffed chairs. The battered Windsor benches and the paisley kayak hanging from the ceiling.

Even the fusilli figurine, fondly known as the E-room troll.

On the evening of Jan. 9, Bates Outing Club moved their longtime headquarters (and stuff therein) from Alumni Gym, across the Library Quad and into newly renovated space in Chase Hall. In true can-do BOC spirit, they chose to execute the move mostly themselves.

The BOC, whose basement space in Alumni Gym had been the club’s meeting room since 1929, will have its equipment room, now in Hathorn Hall, also move into Chase Hall in the coming months.

Chase, formerly dominated by the campus dining Commons, which in 2008 moved into a Sasaki-designed building of its own, has recently been renovated to better accommodate student-life programs.

Below is a time-lapse video of the BOC move below and a gallery of images, both by Mike Bradley of the Bates Communications Office. 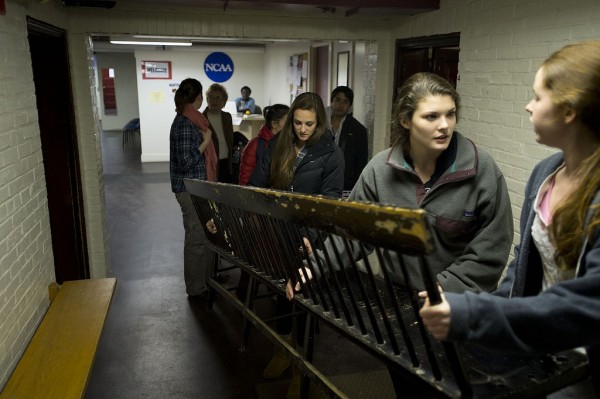