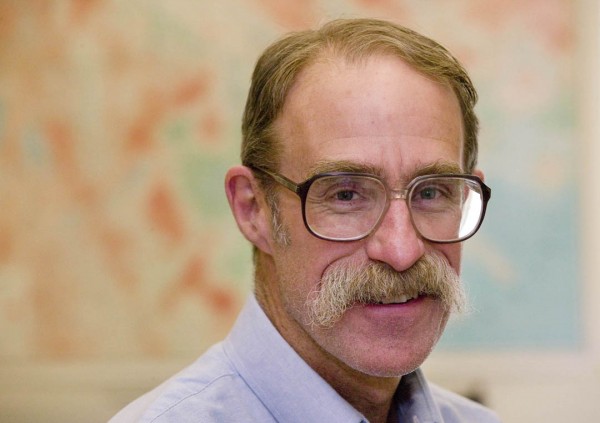 Asking students to examine their own cultural investments and engage with one another is part of getting them to think like anthropologists, says Danforth, Charles A. Dana Professor of Anthropology.

When students begin to see the cultural underpinnings of their hobbies and beliefs, “that’s the most fun.”

At the same time, he says, “you get students who are insulted, offended, troubled. That can be really agonizing to work through, but it means you’re hitting on something really important and interesting.”

Danforth’s ability to work through these sometimes-visceral discussions has earned him a devoted following of students throughout his more-than 30 years of teaching at Bates.

This year, he received the college’s Kroepsch Award for Excellence in Teaching, established in 1985 by a gift from Robert Kroepsch ’33.

Danforth will give the Kroepsch Lecture on his experience leading 16 Bates students on a Short Term trip to Saudi Arabia last May.

Proposed and coordinated by Saudi native Leena Nasser ’12, Danforth’s student at the time, the excursion introduced the class to Saudi culture and included meetings with a range of activists, professionals and everyday citizens.

Leading the trip proved to be as much a learning experience for Danforth as his students.

“I was being an anthropologist myself, just taking notes furiously,” he says. At the same time, he recognized that he was “modeling for the students asking questions, doing interviews and taking notes.”

The cultural exchange did not always go smoothly. Danforth recalls an incident in which one of his non-Muslim students attempted to pick up a copy of the Q’uran, an act widely regarded as taboo in the Muslim world.

Danforth used the incident as a teaching opportunity, engaging their Saudi hosts in a debate about how non-Muslims interact with Islam’s sacred text.

Steven Kemper, chair of the Bates anthropology department, says Danforth “brought to this department a notion that anthropology, the content of the discipline, is a moral endeavor…that it is a way of treating people and caring about people.” 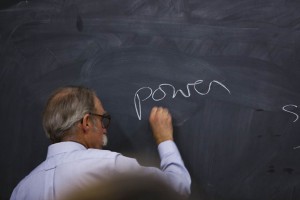 Danforth puts the writing on the wall for his students. Photograph by Ryan Donnell.

Nasser agrees. She says, “There is a lot of diversity” among students at Bates, “but not many classes utilize this diversity and perspective in the classroom like Professor Danforth.”

Reflecting on her experience in Danforth’s courses, Claire Jakimetz ’08 of Litchfield, Conn., says, “Every class was a dialogue — a safe, supportive environment to pose questions, dissect puzzles and offer our own explanations.”

Almost a year later, a few students from the Saudi trip continue to meet with Danforth to discuss ways they can use their experience to dispel myths about Saudi Arabia and Muslim culture more broadly.

Together, they have contributed essays and op-eds on the subject. Danforth is contemplating writing a book based on his “furious” notes and observations.

It’s an example of how Bates is the “perfect balance of teaching and scholarship,” he says. “And you need to do both really well and really seriously.”

“To have a community of people who are good scholars and care about teaching has been a blessing.”

Danforth’s lecture is co-sponsored by the Kroepsch Award Selection Committee, the college division chairs, Information & Library Services and the Dean of the Faculty’s Office.