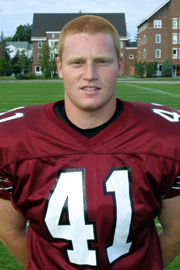 Reporter Brandon Hall of ESPN Boston offers a brief Q-and-A with Pat Foley ’04, former All-NESCAC linebacker who is the new head coach at the Brooks School, where the program has won one game since 2010.

The past isn’t prologue, Foley tells Hall. “Between now and when I get on the practice field for the first time, I’m not gonna put too much weight on the past, and see how the guys do moving forward.”

Foley takes the position at Brooks, in North Andover, Mass., after four years as co-defensive coordinator at Colgate University.

Video: Skip Capone, the old football coach, finds a new sport and a new way to give back