By Victoria Stanton. Published on November 15, 2013

“Change is upon us,” Winfield Brown ’89 told an audience of students, faculty and community members in Pettengill Hall on Tuesday, Nov. 12. 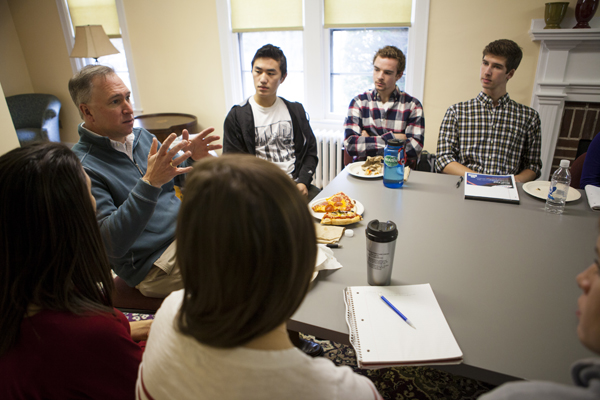 Winfield Brown ’89, the College Key’s Distinguished Alumnus in Residence, meets with students to discuss careers in healthcare during a campus visit on Nov. 12. (Sarah Crosby/Bates College)

Brown, CEO and president of Heywood and Athol hospitals in north central Massachusetts, made his declaration during a talk on current trends in healthcare and patient services, part of his two-day campus visit as the College Key’s Distinguished Alumnus in Residence.

Well-timed against the failed launch of the Affordable Care Act’s insurance exchange website, Brown’s talk put a fine point on the economic forces influencing hospitals, physicians and even students graduating from Bates.

The model tends to encourage providers to schedule additional, costly and often unnecessary visits and procedures. Instead, Brown believes insurance companies should create monetary incentives for prevention and other cost-saving initiatives.

“We need to keep people healthier,” he said, “and to do that, we have to reward physicians and hospitals for performance.”

The reason healthcare is at a tipping point is because patients are “paying too much for what we get.”

The “changing culture of care.”

Brown noted that more and more Bates students are considering careers as nurse practitioners and physician assistants instead of medical school.

“That’s something you would not have seen 10 years ago,” he said, and it’s all part of what he calls the “changing culture of care.”

Much of the phenomenon is simple economics. In today’s healthcare systems, nurse practitioners and physician assistants draw higher salaries than in years past, workmore manageable hours and incur less student debt than physicians.

It is an attractive option for students who want a work-life balance, he said.

Brown, who took time during his residency to meet with students who are interested in medical-related careers, got his own start in the field in 1996 with a nudge from the late Dean of the College James Carignan ’61.

A long-time family friend and mentor, Carignan was on the board of directors at St. Mary’s Health System in Lewiston when he wrote Brown, who was establishing a career in nonprofit fundraising, a note that read, “St. Mary’s needs you.”

Brown went on to accept a position as executive director and vice president of the St. Mary’s Foundation. He still has Carignan’s note.

Brown held leadership positions at Lowell General Hospital and Northern Berkshire Healthcare in Massachusetts before taking the helm at Heywood in 2011. He graduated from Bates with a degree in economics and obtained master’s degrees in business and healthcare administration from Husson University and the University of Minnesota, respectively.

The Distinguished Alumni in Residence program was established in 2003 by the College Key, a Bates organization that promotes extraordinary achievement among current and past Bates students. 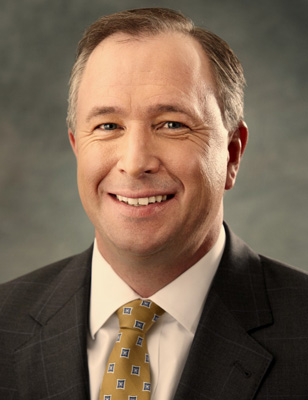