From blue bin to Beyoncé, 2013 Trashion Show is a sensation 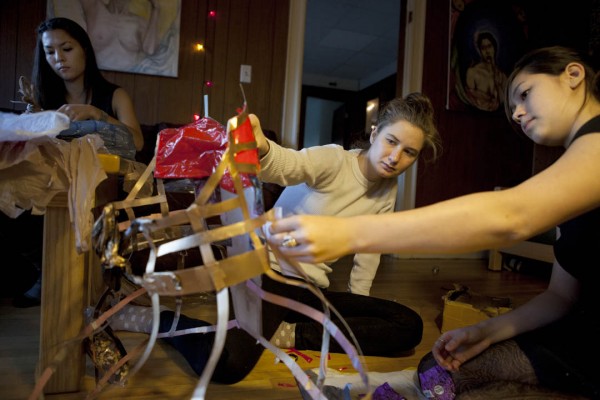 “I think we all do it,” Linnea Brotz ’15 said with a mouthful of pretzel, cutting up notes from a class to make an extra flourish on a trash bag dress. “You have an old plastic bag, you want to reuse it and you alter it,” she mused.

A modest but seasoned trashionista, Brotz of Berkeley, Calif., was underselling her impressive history with costuming at Bates. Singha Hon ’14 of New York City, one of her design partners and the model for the Bates Trashion Show just a few days away, similarly waved away any notion of difficulty in their task while preparing her outfit.

Hon, Brotz and their partner Kahea Mueller ’15 of Rye, N.Y., were just three of the fashion designers working away in mid-November to perfect their attire for the most glamorous fashion event involving used Commons napkins: the Bates College Trashion Show.

Pitting students, staff and other Bates community members against one another in a friendly quest to make recycling fashion-forward, the well-attended event takes place every year before November break and directly after Harvest Dinner, Bates’ spin on Thanksgiving. 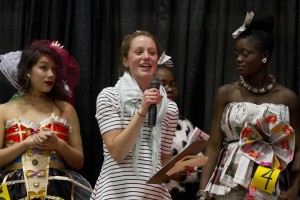 In the event, which took place Nov. 20, Hon and Brotz’s design won the title “Most Sensational,” which seems to fit their fashion vision from the get-go.

During the design phase, earlier in the week, Brotz and Hon appeared to agree on their main inspiration: Beyoncé. “You definitely need a crown,” reasoned Brotz. “Just like Queen Bee in ‘Bow Down.’ ” Hon earnestly affirmed this decision.

While emulating Beyoncé, though, their fashion perhaps was more reliant on plastic bags, recycled paper and cardboard than on the Queen Bee herself.

“I was hoping we were going to be punk,” added Brotz, when asked about her vision for their trashionwear. “Frills up, but with nails. We need a choker. …We should make you a scepter.

“That’s exactly what you need.”

It seems clear, then, that Brotz and Hon’s casual prowess in the trashion world can’t be matched by simply cutting up a couple of plastic bags. Unlike many of this year’s designers, Brotz and Hon both have considerable experience working at the Bates costume shop.

Brotz took an independent study in the costume shop on pattern drafting, learning the basics and coming out of the class with a jacket and dress made for her. Not only did this experience improve her costuming ability but her math as well, Brotz noted. Enlarging a drawing up from 1/50th scale to full size for a pattern is pretty difficult, she noted, though it seems both to have paid off and been very much in the vein of Bates’ liberal arts core.

Hon, a double major in art and visual culture and in theater, spent the summer working for a custom denim company in Brooklyn. She’s interested in bringing together her interests in theater and in “making things,” whether in the form of performance art or other experimental mediums, such as trashion design.

“I lived with seven fashion designers when I was [studying] in London who were all very fierce,” Hon added. “I was making paintings out of fur.” She came back to Bates interested in spicing up the campus’ take on outerwear.

For materials, like the other Trashion Show contestants, the pair had a lot of collecting to do and ample places to find the goods. “Basically I had a trash corner in my house and said to my friends, ‘Give me trash!'” Hon said. Pointing to the delicate plastic bows lining the front of her dress, she added, “we ate some chocolate for the cause.”

Other materials on her ensemble included spray-painted cardboard, bubble wrap, many plastic bags, a yogurt-lid crown (“This is the most narcissistic outfit,” Hon joked), netting and cut-up receipts and class notes. 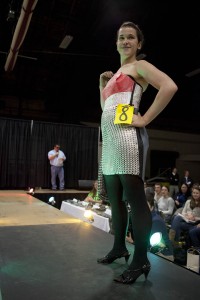 Though the competition awards winning titles at the end of the night, Hon and Brotz did not seem too interested in worrying about their competitors. On the contrary, they raved about Hannah Cover ’17 of Canton, Conn., and her wildly impressive skill.

Awarded as most creative, Cover crocheted can tabs to the front of her dress to create the illusion of impenetrable chain-mail, while ironing together plastic bags over and over to create a rewearable rubber material, which Cravero described as a “huge game-changer.” The Bates Sustainable Athletes made their debut in this year’s event as well, one of the night’s many group-effort pieces to be displayed.

The judges were Kirk Read, associate dean of faculty and professor of French and francophone studies; Associate Professor of Art and Visual Culture Pamela Johnson; Hally Bert ’14, a Bates Ecorep; and Annie Cravero ’13 winner of the 2012 Trashion Show.

Other awards went to designer Kevin Tejada and model Praneet Kang, both ’17, for best use of recycled materials; designers Folarera Fasawe and Jessica Clergeau, both ’15, and model Fatima Sacko for best overall; and local fifth-graders Elena Ray Clothier and Bridget Kahan, both designer-models, for emerging designer.

The event is run every year by the Bates EcoReps, students employed in the ever-continuing crusade to make Bates more environmentally sustainable.