‘How to Make the Universe Right’: a landmark exhibition of shamanist objects from Vietnam 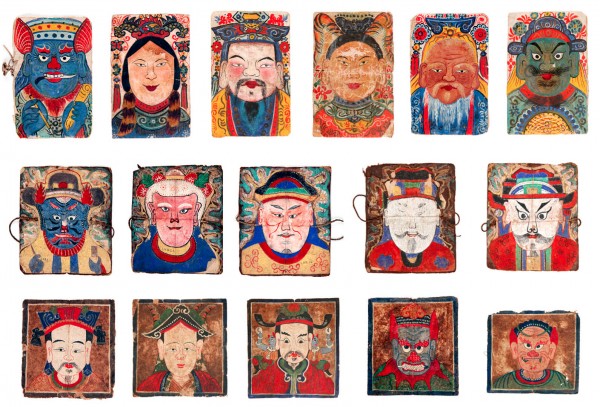 Paper masks used in shaman rituals of the Yao people of Vietnam.

In an exhibition believed to be the most extensive of its kind in the United States, the Bates College Museum of Art presents an extraordinary selection of painted scrolls, masks and other objects used in shamanist ceremonies of five ethnic minorities in northern Vietnam.

How to Make the Universe Right: The Art of the Shaman in Vietnam and Southern China opens at 6 p.m. Thursday, Jan. 23, with a talk by Trian Nguyen, associate professor of art and visual culture at Bates, in Room 104 of the Olin Arts Center, 75 Russell St. The exhibition is based on recent research by Nguyen. A reception follows the lecture.

Pavel Zoubok, founder of the ICC, presents a lecture on the exhibition at 7 p.m. Wednesday, Feb. 5, also in Olin’s Room 104. 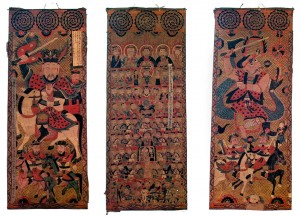 Painted scrolls used in shaman rituals of the Yao people of Vietnam.

The exhibitions appear through March 21. The museum and its programs are open to the public at no cost from 10 a.m. to 5 p.m. Monday through Saturday, and until 7 p.m. Wednesdays while Bates is in session. For more information, please call 207-786-6158.

More about How to Make the Universe Right

Among Vietnam’s 54 ethnic minorities are five that migrated to the mountainous north from southern China starting as early as the 11th century: the Yao, Tày, Sán Dìu, Cao Làn, Nùng and other groups.

These groups followed a rich and diverse tradition of shamanist practices encompassing Daoist, Buddhist, Confucian, animist and other religious beliefs. Their religious ceremonies made use of ritual objects ranging from talismans to musical instruments to painted scrolls.

How to Make the Universe Right presents an extraordinary selection of shaman scrolls and other objects from those five minorities, primarily the Yao. 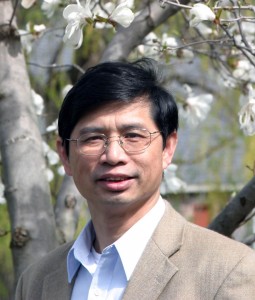 Mills curated the exhibition in conjunction with Nguyen, whose research forms the scholarly foundation for the show, and with Barry Kitnick of Santa Barbara, Calif., from whose collection the show has been assembled.

“How to Make the Universe Right will appeal to people who are interested not only in beautiful art and material culture, but in history and spiritual beliefs,” Mills says, “and in storytelling, because these objects are so rich with stories.”

While vestiges of the shamanist traditions linger on, political and social change has largely effaced them from northern Vietnam. “This exhibition creates a remarkable opportunity to see extraordinary works of art that represent people little-known in the West whose spiritual lives really revolved around shamanism,” says Mills.

The shamans, Nguyen explains, are community leaders in more than the spiritual realm. They are the healers and the intelligentsia.

“They are the most educated people,” says Nguyen. “They know how to read and write Chinese. They pass knowledge from one generation to another. And they are really highly honored within the community.” 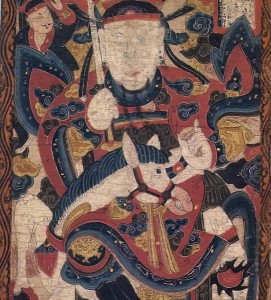 A detail from a painted scroll.

A manikin dressed as a Yao shaman will greet visitors to the exhibition. A nearby alcove in the museum’s first-floor gallery will house a shrine composed of a typical array of hanging scrolls and ceremonial objects. The bulk of the exhibition will group objects by type.

The scrolls, composed of ink and water-based paint on rice paper, are the focus of the exhibition. (One horizontal scroll is 50 feet long.) The 80-plus scrolls on display represent a wide diversity of ethnic origins, aesthetic approaches and levels of artistic accomplishment.

In the Daoism-based tradition of the Yao, the scrolls were used in ceremonies for ordination, healing and funerals. Many depict deities. Once consecrated by the shaman, such scrolls were believed to be inhabited by the deities, and the shaman could communicate to them, and through them to worshippers’ ancestors.

Kitnick engaged Nguyen to research his collection of the shaman objects, based on the Bates professor’s extensive knowledge of Asian art, languages and culture. His research will take the shape of an illustrated nine-chapter publication that’s likely to be the first authoritative work in English on the subject. (The book will not appear until after the Bates exhibition.)

A fourth partner in creating the exhibition is the Art, Design and Architecture Museum at the University of California, Santa Barbara, to which the show will travel late next year. Ayse Ikizler, a Bates junior and museum curatorial intern, helped with the design of the exhibition.

Important support for How to Make the Universe Right comes from the E. Rhodes and Leona B. Carpenter Foundation.