By Victoria Stanton. Published on February 28, 2014

“A teacher is always trying to start something,” says Thomas Tracy. 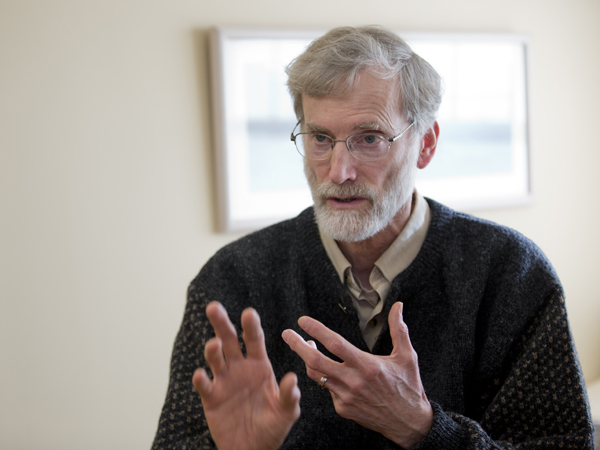 Thomas Tracy is the Phillips Professor of Philosophy and Religious Studies, and recipient of the 2014 Kroepsch Award for Excellence in Teaching. (Phyllis Graber Jensen/Bates College)

Tracy, the college’s Phillips Professor of Philosophy and Religious Studies, doesn’t mean a fight necessarily, but rather the philosophical sense of argument that involves an exchange of views backed up by reasons.

He describes himself as an agent provocateur in the classroom.

When Tracy does “start something,” he does it with humor and respect for how difficult it can be for students to analyze religious texts.

“They find themselves challenged in fairly deep ways,” he says. “I try to encourage students to recognize that their relationships to their own faith traditions can be deepened and enriched through this process of reflection.”

Tracy’s deft skill at this task has been acknowledged with the college’s 2014 Kroepsch Award for Excellence in Teaching, established in 1985 by a gift from Robert Kroepsch ’33. Nominated by students and alumni, recipients are selected by a committee of previous years’ winners.

Tracy will give his Kroepsch Lecture on the public debate between the Christian teachings of creationism and the scientific theory of evolution.

His lecture reflects the idea that “something about our particular culture keeps this endless controversy between evolution and creation going,” says Tracy, who studies the relationship between religion and science. This debate tends to focus on the age and origins of the earth, but Tracy intends to show that such a framework fails to address the fundamental issues at stake.

John Smedley, professor of physics, teams with Tracy to teach “Caring for Creation,” an interdisciplinary course that looks at both science and religious thought to understand how people conceptualize the natural world and the origins of our universe.

For their students, they model the idea that it’s OK not to know something.

“Something could come up that Tom brings in from his expertise that I don’t really know about, and then we can have a conversation about it,” says Smedley.

“That’s the thing that we demonstrate for students — conversations about interesting ideas and topics from different perspectives. Not being afraid to just say, ‘Wow, I didn’t think of that before.’”

It’s the intrinsic value of what we do that makes for a richer and more interesting life.

“He asks his students big questions, and he encourages them to respond with bigger ones,” Hamilton says.

While the obvious results of studying philosophy are improved skills in critical thinking and communication, “it’s the intrinsic value of what we do,” says Tracy, “that makes for a richer and more interesting life.”

The philosophy classroom, he says, “complicates the world and allows you to live a life that is in conversation with a more diverse range of human beings, across intellectual and cultural differences — and also in time, across historical differences.”

“He taught me how to make course material relevant to my life — to see the big picture and make it matter.”

Tracy began teaching at Bates in 1976. He holds a bachelor’s degree from St. Olaf College and a doctorate from Yale. He is a scholar of Christian thought and environmental ethics and is the author of The God Who Acts: Philosophical and Theological Explorations (Penn State University Press, 1994).