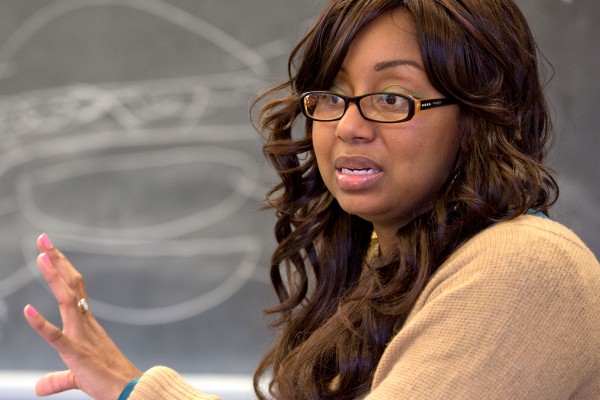 Do the people you touch make you the person you are? If you are breathing, can your oppressors claim that you do not exist? Is a seemingly robust Magic Johnson really the best person to promote AIDS and HIV awareness?

Questions like these drive a new book by a Bates professor examining the literary uses of bodily awareness in writings by Arab American and African American authors.

The first book-length cross-racial study of narratives reflecting those groups, New Body Politics: Narrating Arab and Black Identity in the Contemporary United States is the creation of Therí Pickens, assistant professor of English. The book was published in February by Routledge.

Putting these two cultural traditions “into conversation with one another,” says Michelle Wright, who teaches African American studies at Northwestern University, “takes the reader through a dazzling array of topics, from the construction of minority subjecthood and family politics to illness and medical practices.”

She says, “The book aims to answer the question of how blacks and Arabs in the late 20th and early 21st centuries make meaning out of bodily sense — how they mobilize their embodied experience, with all of its various and itinerant parts, to create social and political critique.”

Pickens argues that African Americans and Arab Americans narratives tend to rely on the body’s fragility, rather than its exceptional strength or emotion, to create critiques.

A native of New Jersey, Pickens grew up “in a multiracial, multilingual, multi-ethnic space. And that setting really prompted me to think about what it means to constantly be aware of one’s difference and to engage the difference of others.”

She is acutely cognizant of literature’s power not just to enrich inner life but also to point the way to material change. “I think if we can put literature back into the conversation, then we can truly imagine a better world,” she says.

“The human capacity for storytelling is absolutely amazing and is one of the things that crosses cultures and crosses time.”

Pickens, who came to Bates in 2011, bases her research on the study of the nature of awareness itself — a branch of philosophy called phenomenology. In addition to Arab American and African American literatures, her interests include disability studies — a field that bears on “New Body Politics.”

“Disability takes seriously this issue of your body mattering. The field of disability studies asks us to consider disability as a social category” — a category to which, but for the grace of good fortune, “everyone can belong.”

Her blog and a schedule of appearances are featured at www.tpickens.org.