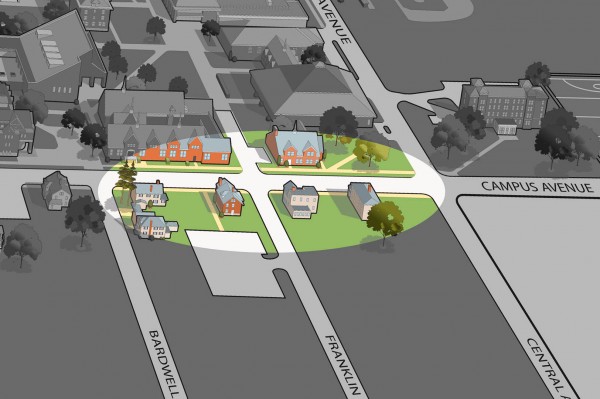 The colored oval indicates, more or less, the site of the forthcoming first phase of the Campus Life Project.

You might think that with no actual construction to report on, Campus Construction Update would think twice before strapping on the old tool belt, loading it with pens and notebooks and the digital camera that we still don’t understand, and launching another series of reports from the work site.

Well, thinking twice might be OK for some campus construction reporters, but this writer is nimble enough to get going after thinking only once, if that.

At any rate, there is construction in Bates’ future, bricks-and-mortar evidence of a renewed institutional momentum. By late summer of 2014, there will be obvious signs of the college’s third major bout of facilities work since 2006, as the Campus Life Project, announced last December, gets underway. 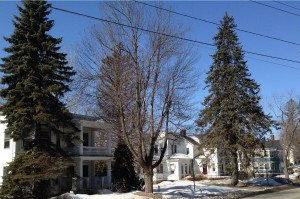 65 Campus Ave. will occupy the block nearest the camera, and 55 Campus Ave. the next block to the right. (Doug Hubley/Bates College)

The first phase of that project will be the creation of two student residences on the south side of Campus Avenue facing Chase Hall and the Edmund S. Muskie Archives. Each three and a half stories tall and occupying a full block, the new residences at 65 Campus Ave. and 55 Campus Ave. will total upwards of 95,000 square feet and at least 230 beds.

65 Campus Ave., on the block closest to Central Avenue, will also house the package center and mailroom now in Chase Hall, along with the Campus Store, liberated at last from its subterranean digs in Chase.

55 Campus will take up the block between Franklin and Bardwell streets now occupied by the Bates Career Development Center and the Office of Intercultural Education.

The idea is that 55 and 65 will be ready for occupancy by start of school in 2016. Later on, landscaping features at Central Avenue and major renovations to Chase Hall will complete the transformation of this stretch of Campus Avenue into a new center of student life and a portal to Bates.

Still, as the British say, there’s plenty of tea between here and there. Chris Streifel, Facility Services project manager for this undertaking, points out that it’s early in the game to predict exactly what will happen when, even though Campus Construction Update wishes he would try because it helps with planning break times. 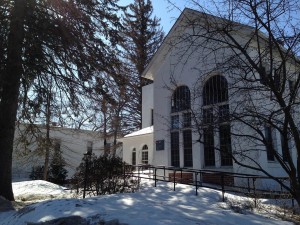 The new student residence at 65 Campus Ave. will occupy this lot, site of the former Alumni House, and the adjacent lot to the left, where the philosophy and religion faculties once were housed. (Doug Hubley/Bates College)

“We’re still working on a lot of details,” Streifel says. “There’s a long way to go before we really tighten up the specifics of the construction schedule.”

The next project milestone — what Streifel calls the schematic design package — will be issued by Boston’s Ann Beha Architects at the end of April.

“That will give us a full look at where the design stands,” Streifel says, and will enable a budgetary analysis. “That’ll be a pivotal point, as we make sure that we’re within the budget realm that we should be in, and that the design is progressing in the direction we want.”

Then it will be several weeks before construction — or its opposite — is apparent, with the late summer demolition of several Bates-owned wood-framed houses along Campus Avenue.

The exact number of houses facing the wrecking ball is not final, but it’s likely that the buildings now housing BCDC and the OIE will come down.

Likewise the former Alumni House, that white stucco presence at Campus and Franklin; 45 Campus, where six student organizations are quartered; and the old white house near Central where the philosophy and religion faculties once resided, and where Lewiston firefighters now conduct rescue training. 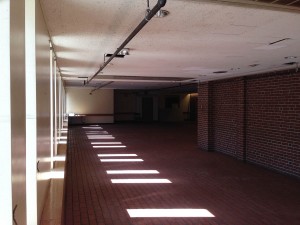 Once known as the “Small Room” of the Memorial Commons dining hall, this is the future home of the Office of Intercultural Education. (Doug Hubley/Bates College)

The student groups, BCDC and OIE staffs will move to new quarters during the summer in a sort of choreography. Let’s see if we have this straight:

The OIE move will involve the most extensive renovations, says Paul Farnsworth, project manager for the relocations. The office’s new digs in the sunny former dining area will entail the creation of new offices, gathering spaces, a kitchen area and dedicated rooms for Muslim, Hindu and Buddhist religious practices. 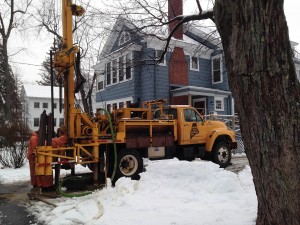 They know the drill: The Maine Test Borings crew at work in December 2013 sampling the soil at 63 Campus Ave. (Doug Hubley/Bates College)

OIE will have its own entrance on Campus Avenue, and a second access for emergency egress will be created. The office will end up with more floor space than in the current location.

As the old houses come down, subcontractors directed by the firm serving as construction manager (think: general contractor), Consigli Construction of Milford, Mass., will grade the terrain and start utilities work. (Longtime Construction Update fans will remember Consigli from the Alumni Walk-New Commons project.) The goal, Streifel says, is to finish major utilities work by Thanksgiving.

“We want to get in and out of the streets between now and then in order to be able to set ourselves up for a nice productive winter” of foundation and structural work. And then Campus Construction Update will really have a use for that toolbelt. (Now if we could just get the camera sorted out.)

The foundation work, by the way, will be informed by work that took place last December. At several sites on and near Campus Avenue, boring crews (drilling! drilling!) took core samples for an analysis of the soil structures.

This preliminary geotechnical work tells the architect “what structural loads and what foundations are appropriate to our project,” Streifel explains. “It’s the same type of soil that we’ve encountered elsewhere on campus. It’s pretty typical — some marine clays, some softer silty layers.”

Can we talk? Got questions or comments about construction at Bates? Please contact Doug Hubley at dhubley@bates.edu, putting “O Wise One” . . . sorry, “Campus Construction Update” in the subject line.