In video and text, here are the honorary degree citations and conferrals for John Seely Brown, Glenn Close, David Evans Shaw and Isabel Alexis Wilkerson, delivered at Commencement 2014 on May 25.

Each citation was read by Dean of the Faculty Matthew Auer, and each conferral by President Clayton Spencer. 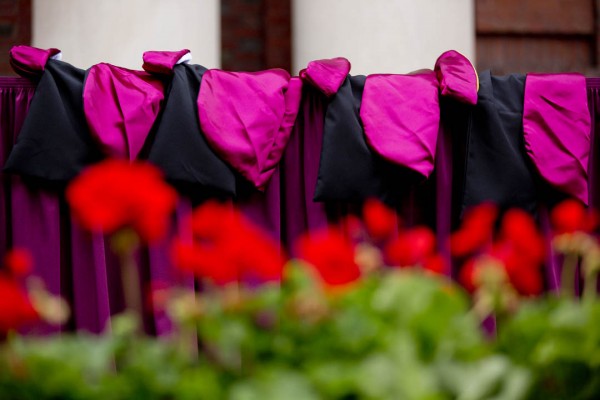 Most of us spend our time on this earth searching for answers. Our first guest has turned that quest on its head: He focuses on asking the right questions.

Courting and embracing change, he calls himself the “Chief of Confusion,” a title meaning that he helps people and organizations “to see that what they’re seeing isn’t quite what they thought it was.”

He is brilliant at finding meaning in confusion, and the line of people seeking his counsel includes the biggest movers and shakers on the planet: scientists, educators, artists and business leaders who seek to promote radical innovation and progress.

The author of groundbreaking books, including The Social Life of Information, and more than one hundred journal articles, he was Xerox Corporation’s chief scientist and director of the company’s legendary Palo Alto Research Center for nearly two decades in the 1990s and early 2000s.

At Xerox, he was the visionary behind innovations that gave us the personal computer and the Ethernet. As he once told Wired Magazine, in the digital revolution it is our tools, much more than theory or experiment, that are powering our greatest advances. “Tools have transformed by orders of magnitude the questions we can ask and answer.”

Now co-chair of the Deloitte Center for the Edge and senior fellow at the Annenberg Center for Communication at the University of Southern California, our guest’s current preoccupation is the power of play, and not only when he is riding his motorcycle. Of late, his laboratory is a beach on Maui, where he puzzles out how surfers measure and improve their techniques through collaboration and competition.

He is fascinated by the Harry Potter phenomenon, how it reveals that passion overrides fear. Kids who are turned on are unstoppable, he tells us, whether they are reading, writing, gaming, or surfing.

A champion of tinkering, he knows that it unleashes imagination. He knows that it brings thought and action together in powerful, unexpected ways. And he knows that it helps us develop the resiliency to survive and thrive in a world where the half-life of ideas is shrinking exponentially.

I present John Seely Brown for the degree Doctor of Science.

John Seely Brown — JSB — the questions you ask and the tools you have created thrive on diversity, imagination, and communication. You lead us to find meaning in a world of flux. You ask us to reinvent the notion of “go with the flow,” no longer a passive march toward a fixed outcome but a wild ride toward uncertainty, the wind in our hair. Therefore, by the authority vested in me, I confer on you the degree Doctor of Science, with all the rights, privileges, and responsibilities thereunto appertaining.

We think we already know our next guest, since she has dazzled us in more than 70 film, stage, and television performances. She is an actress of extraordinary range and authenticity — we know she is playing a role, but she’s just so darn convincing.

She has garnered six Academy Award nominations and more Emmys, Obies, Golden Globes, and Grammys than we can count. She has four films slated for release this year.

This audience would probably be split right down the middle for best villain. For our Bates parents, that would be Alex Forrest in Fatal Attraction, right? And our graduates surely cowered when Cruella De Vil turned puppies into fur coats.

In a comic role, would it be the voice of Mona Simpson, or First Lady Marsha Dale in Mars Attack? Legal eagles would be dueling over Patty Hewes in Damages vs. Captain Monica Rawling in The Shield. And for sheer drama, would it be Norma Desmond in Sunset Boulevard or Albert Nobbs, a movie that our guest not only starred in, but also co-produced and co-wrote?

What enables someone to get so successfully under the skin of her characters and make them so unforgettable to us? As she once said, “In order to truly commit to a character and do her justice, to find her truth, I must love her no matter what the behavior. I have to find some common point of humanity.”

Love and humanity are benchmarks for her good works in other realms. With members of her family afflicted by mental illness, she co-founded the organization Bring Change 2 Mind to eradicate the stigma and misunderstanding these people face. She is a passionate advocate for wildlife conservation and for the eradication of violence against women and girls.

A Phi Beta Kappa graduate of the College of William and Mary, she has credited her liberal arts education with igniting her lifelong curiosity.

Along with fearlessness, honesty, and a New England-born work ethic that just won’t quit, these qualities have propelled her long and brilliant run. She is always keen for a challenge. As she said about choosing her projects, “When I hear that somebody’s difficult, I think, ‘Oh! I can’t wait to work with them!’”

I present Glenn Close for the degree Doctor of Fine Arts.

Glenn Close, your passion and intelligence animate your many roles as actress, advocate, and adventurer. With every endeavor, you touch our hearts and our minds as you work to explore the boundaries of what it means to be human. You are truly a woman for all seasons. Therefore, by the authority vested in me, I confer on you the degree Doctor of Fine Arts, with all the rights, privileges, and responsibilities thereunto appertaining.

Our next guest has distinguished himself in so many arenas — biotechnology, business, and public service, to name just a few — that one wonders where to begin.

It is tempting to center his story back in 1983, when he founded IDEXX Laboratories here in Maine, a company that develops innovative diagnostics and technologies to safeguard food and water quality and improve animal health. IDEXX now employs more than 5,000 people in more than five dozen locations around the globe.

But that was so, well, yesterday. Since building that great company, our guest has propelled himself toward a series of new and different entrepreneurial challenges, each time choosing to leave the stable and secure ground of success for risk, adventure, and new turf.

Along the way, he has become a virtual comet of inspiration and connection across a vast array of organizations and endeavors. Always ready to share his knowledge, his grounding principle is the idea that a well-run business can also make the world a better place.

As partner, collaborator, investor, or director, he has worked to build successful teams in more than a dozen public and private companies around the world. There’s Sapphire Energy, for example, which develops renewable fuels, and Ironwood Pharmaceuticals, committed to the art and science of making medicines.

He is a steward of planet preservation, bringing his expertise in science, leadership, and innovation to his role as a director of the National Parks Foundation, chair emeritus of The Jackson Laboratories, and founding chair of The Sargasso Sea Alliance.

We sometimes think that entrepreneurs are entirely self-made, like the goddess Athena leaping fully armed from the head of Zeus. Our guest has generously told a different story, of how he was mentored by the late Robert Kinney, Bates College Class of 1939.

On this very spot in 1985, when Mr. Kinney received his own honorary degree, he was lauded as an extraordinary business and civic leader who was “always thoughtful for the needs of others, always ready to serve, always ready with a helping hand.” Twenty-nine years later, we are delighted to discover that the same qualities are richly embodied in our guest.

I present David Evans Shaw for the degree Doctor of Humane Letters.

David Evans Shaw, your entrepreneurial success is a rising tide that has lifted many boats. By yoking science and technology with service and art, you have transformed lives and stewarded the precarious health of our planet, spinning new innovations and partnerships that protect and connect, heal and celebrate. And you entrusted Bates College with the education of your son, Ben. Therefore, by the authority vested in me, I confer on you the degree Doctor of Humane Letters, with all the rights, privileges, and responsibilities thereunto appertaining.

Our last guest’s journey is every bit as riveting as the journeys she chronicled in The Warmth of Other Suns, her groundbreaking, multiple prize-winning account of the Great Migration.

The migration was a political act — defection driven by tyranny. Six million Southern blacks heading North and West, seeking asylum within their own country and exercising the only agency available to them — to leave.

Widely hailed as magisterial, “massive and masterly,” The Warmth of Other Suns is, as one critic noted, “a brilliant and innovative epic, combining the historian’s rigor with the novelist’s empathy.”

Like any epic story told well, The Warmth of Other Suns features a cast of thousands. Our guest found her subjects in churches, Masonic lodges, quilting clubs, and gospel radio stations across the nation, logging more than 1,200 interviews with those who found the courage to leave not only the Jim Crow South, but also their families, homes, and communities.

Her own family was part of the migration, and there were touchstones that marked her earliest memories growing up in Washington, D.C.: her grandfather’s Corona typewriter, with which he, an elevator operator, wrote reams that no one else would ever read.

Honing her craft at The New York Times in the 1980s and 1990s, our guest went looking to tell stories about individuals in a way that would resonate with us all. As she once said, “We tend to focus on the diversity, the [differences between] cultures, instead of focusing on what makes us the same.”

Along the way, she became the first African American woman in American journalism to win a Pulitzer Prize.

She juggled multiple jobs, all to fuel her quest to save stories that are hard to hear but essential to know if we seek a full and authentic accounting of our history. If the truth can set us free, Isabel Wilkerson’s incredible journey has led us closer to that dream: one nation, indivisible, with liberty and justice for all.

I present Isabel Alexis Wilkerson for the degree Doctor of Letters.

Isabel Alexis Wilkerson, you are a woman of uncommon substance, conscience, perseverance, and style. You have mapped a new geography that describes the lay of the land and of the heart. Because of you, we know our nation: brave, bold and in beautiful color. Therefore, by the authority vested in me, I confer on you the degree Doctor of Letters, with all the rights, privileges, and responsibilities thereunto appertaining.