If you know someone born in the United States before 1965, author Isabel Alexis Wilkerson explained to the Bates Class of 2014, “you know someone who was not born in a democracy.

“Think about that,” said Wilkerson, Commencement speaker and author of an acclaimed history of the Great Migration of black Americans out of the South during the 20th century.

“Because until that time, millions of American citizens were prohibited from voting,” she said. And today, she pointed out, those hard-won gains in social and political justice from half a century ago are again in peril.

“No matter what course your life takes, there is but one thing that you absolutely must do before you leave this planet,” Wilkerson told the 448 soon-to-be graduates. “You must leave this world a better place than it would have been if you had not existed.” 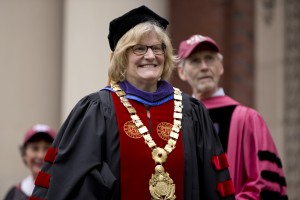 Featured speaker at Bates’ 148th Commencement, held on the Historic Quad on May 25, The Warmth of Other Suns author Wilkerson was also one of four honorary degree recipients. Joining her and college President A. Clayton Spencer on the Coram Library stage were:

•    Glenn Close, an actress renowned for her ability to bring characters to vivid life and an activist in the fields of mental health and wildlife conservation;

For the second year, one of the graduating seniors offered Commencement remarks. His Bates experience wasn’t typical, explained Collin McCullough of Plattsburgh, N.Y.: He took his junior year off from school and so graduated with the Class of 2014 instead of his “natural” classmates.

Two qualities prevailing at Bates made it easier for him to fit in than it might otherwise have been: intelligence and kindness. “Hard work and quick minds make us respectable individuals, but it is our willingness to engage and challenge each other with openness, with acceptance, that makes us remarkable,” McCullough said. 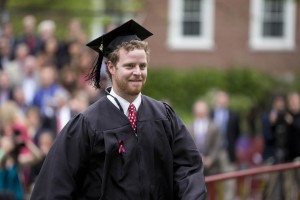 And he found acceptance in ample measure.

“This institution has enhanced my ability to think critically and to hold fast to my opinions. It has taught me confidence and communication,” an emotional McCullough concluded, barely able to get the words out.

“But from the students in the class of 2014, I have learned the value of something I prize above all else. And that is the power of a simple hello or a selfless extension of kindness.”

For Wilkerson’s part, she offered an anecdote to illustrate the ability of one individual to effect change. She was having lunch with a colleague one day who surprised her by revealing that he came from a long line of child abusers. 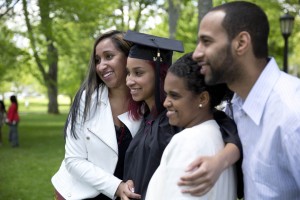 Wilkerson told her Bates audience, “It takes courage to confront what has gone before you and more courage still to end an injustice and set a new course.

“That is the choice before you and your generation. It may not be all that you do, but I hope that it will be part of what you do on your journey.”

“Yet in the time since you have been in college, in four short years, many of these advances have been dismantled,” she pointed out — from efforts to curtail voting rights for minority and disadvantaged people to the coarsening of public discourse to “worsening disparities between blacks and whites in every sphere of life.”

The things that divide us today have deep and persistent roots in history. But Bates, Wilkerson reminded the seniors, was “founded out of a desire to end these divisions, founded in the darkest hours before the Civil War by abolitionists who dreamed a world different than the one they had been born to.” 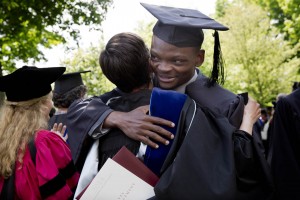 And she shared the words of two African Americans who had the benefit of a Bates education at a time when college was an impossible dream for countless Americans of color. The Rev. Benjamin E. Mays ’20, mentor to Martin Luther King, pointed out the resiliency conferred by a personal sense of mission.

And Wilkerson credited one of the college’s earliest black graduates, Thomas James Bollin of the Class of 1879, with what she described as a “beautiful definition of equality”: In an edition of The Bates Student, Bollin wrote that “[s]ocial equality is the brotherhood of man in every condition.”

If good feelings come with the territory at graduation, Commencement 2014 was downright fun. When President Spencer, in her welcome, said, “Seniors, this ceremony is pretty much all about you,” someone yelled right back: “Yes it is!”

Colleen Fitzgerald ’14 and Bridgette Chandhoke ’14 were among several dancers who managed to hug Marcy Plavin, founder of the dance program and dispenser of diplomas, on their way across the stage. There was more cheering from friends and family, but fewer boat horns. 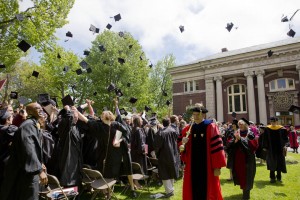 Hats off to the Class of 2014! (Phyllis Graber Jensen/Bates College)

The switching-up of Commencement traditions begun last year continued for the Class of 2014 sendoff. Some were sartorial. For ease of identification, staffers wore shiny sashes — garnet, of course.

Piper Rob Simmons and the Portland Brass figured prominently in the processional, as always, but there were innovations on the music front too. A Commencement Choir sang the Beatles’ “In My Life,” directed by Lecturer in Music John Corrie and sporting Ryen Martinez ’17 and Kelsey Berry ’16 as soloists. (This came complete with a vocal adaptation of producer George Martin’s speed-altered, Baroque-styled piano solo from the Fab Four’s Rubber Soul.)

And hailing from Down East, the Atlantic Clarion Steel Band followed the benediction by the Rev. Raymond Clothier, acting associate multifaith chaplain. The band sent the throng off to their lobster lunch with a series of bouncing two-beats — just the music to close one of life’s chapters and open another. With the sun finally shining after a chilly gray morning, it was better than a Hollywood ending. 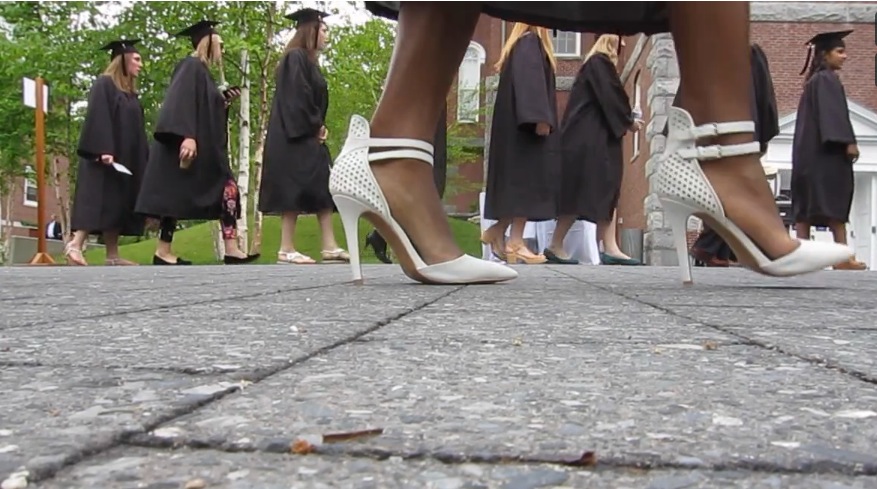 Video: The shoes fit for Bates seniors and faculty at Commencement