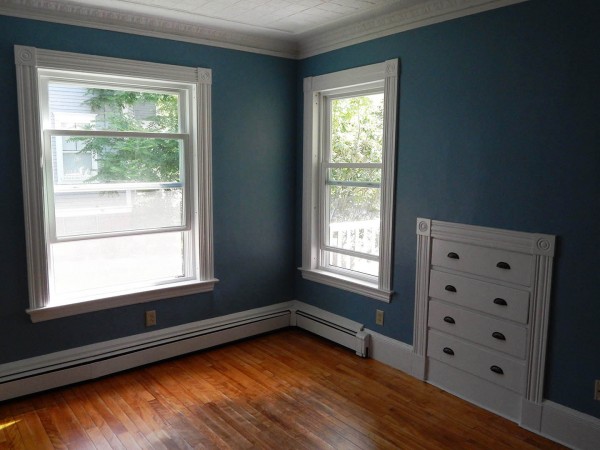 This first-floor office in Bates’ Canham House, soon to be the home of the Career Development Center, is a calming cool blue on a sweltering July morning. (Doug Hubley/Bates College)

Judging by recent construction projects at Bates, drab institutional colors are passé in the world of college decor. 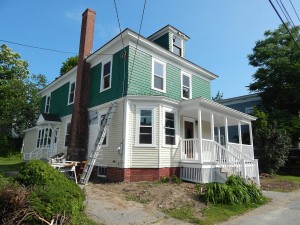 Canham House, soon to be the home of the Bates Career Development Center, during a lull in the replacement of clapboards. (Doug Hubley/Bates College)

Case in point: Canham House, which has just been refurbished as the new home for the Bates Career Development Center. Seen on a sunny July morning, its freshly painted interior looks swell in cool blues, pale grays, saturated yellows and other rich hues.

The two-toned, three-story house at 146 Wood St. opens the third chapter of its Bates career on July 7 with the BCDC occupancy. (See Canham House on the campus map.) Along with the Office of Intercultural Education and a couple of student organizations, BCDC is losing its Campus Avenue home to the wrecking crew as Bates makes way for new campus housing. 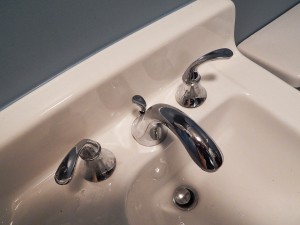 Canham was built in 1920 as a private residence and opened as a college facility in 1985. It housed the history department for 14 years, followed by the Mathematics and Statistics Workshop — which is now in Ladd Library, after a 2013 renovation there.

It’s just like musical chairs here in the turbulent world of campus facilities.

Rehabbing the house for its new occupants was relatively straightforward, says project manager Paul Farnsworth. The work has been underway since spring.

The most complex aspect was the installation of a kitchenette, which the building has never had under Bates ownership. A former copy room was converted for that purpose, gaining a window and a wider doorway in the process. 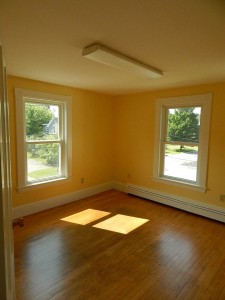 The renovated bathroom has seen the end of an unloved institutional tradition as the sink now boasts two spigots that stay open as long as needed, replacing a single self-closing, water-saving, hygiene-defeating, temper-shortening faucet. (Imagine how frustrating it would be to try to use two of them.)

The Canham renovation also included replacement windows, new electrical and telecom wiring, and fresh floor surfaces. Among the more aesthetic touches, the building is now home not only to the eight members of the BCDC staff but three other Campus Avenue refugees: three French doors, two turtle doves —d’oh! I mean, three French doors and a fine light fixture, all from Alumni House, one of the houses to be razed.

The fixture “does a nice job illuminating the tin ceiling” in the reception area, says Farnsworth.

On the outside, porch rails have been replaced to match the student residences flanking Canham, Wood Street House and Herrick House; and Facility Services is replacing some clapboards prior to refreshing
the green and white paint scheme. 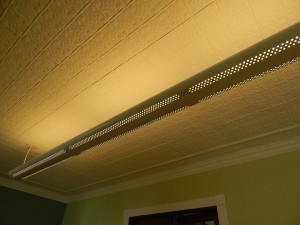 The glow from a light fixture salvaged from Alumni House makes the tin ceiling in the Canham House reception area even more atmospheric. (Doug Hubley/Bates College)

Canham House was named for Erwin D. Canham ’25, a college trustee for 45 years and a former editor-in-chief of The Christian Science Monitor.

Can we talk? Campus Construction Update looks forward to your questions and comments about campus construction at Bates College — please take advantage of the comment system below, or write directly to Doug Hubley at dhubley@bates.edu.