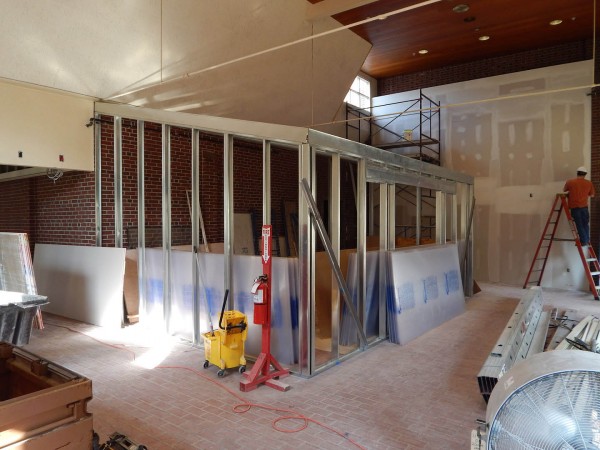 This meeting area will be walled in with a translucent material to take advantage of abundant natural light in the new OIE space. (Doug Hubley/Bates College)

The Office of Intercultural Education will soon occupy space in Chase Hall with an entrance almost directly across from its old digs, at 63 Campus Ave., a building soon to be a memory. 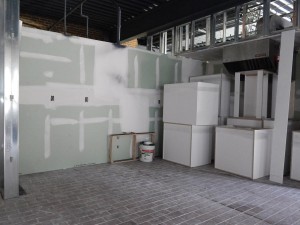 The soon-to-be kitchen in the new Office of Intercultural Education. (Doug Hubley/Bates College)

The heart of the new OIE headquarters is the back corner of the former Memorial Commons, once known unofficially as the Small Room. Long and brilliantly sunlit, much of the space will be given over to groupings of furniture ideal for informal gatherings.

To take advantage of all that natural light, a meeting room and a few nearby offices will have walls made of a white translucent polycarbonate material called Macrolux, which will let in light while maintaining privacy.

At the same time, a gray Corian counter designed for studying will line the north wall, giving students natural light and long views of the Library Quad — and showing passers-by that there’s action in OIE, should they care to pop in.

The facility rounds the corner into a new community kitchen occupying, more or less, the old Commons cashier station. A kitchen island will afford communal work space, says Paul Farnsworth, project manager for the OIE work and other relocations occasioned by the Campus Life Project.

A corridor leads past new prayer rooms for Buddhist, Hindu and Muslim members of the campus community. For handicapped access, another corridor leads to the Chase lobby (cutting through the former Pablo’s pizza station, if that rings a bell), where a lift connects to a ground-level entrance. 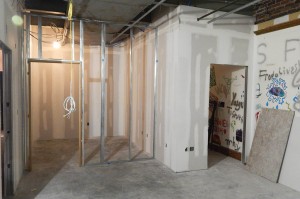 Once part of an art studio in Chase Hall, this will be the new Intercultural Education reception area. (Doug Hubley/Bates College)

Unlike the 2012–13 facelift given to Chase Hall’s Bobcat Den, lobby and lounge, and the high-ceiling section of Memorial Commons, the OIE work entails major surgery — cutting doorways through masonry walls, adding all kinds of new utilities, tweaking the student musician and artist studios, and otherwise reshaping the interior in ways that would leave an old Commons hand clueless.

But Chase, after many additions and repurposing, seems infinitely reworkable. As Farnsworth says, “With Chase, where do you end?” Like Goya and Picasso, the artists of Bates’ built environment keep finding new visions to paint onto that same sturdy canvas.